On September 1, my Kindle automatically downloaded my preordered copy of The Shepherd’s Crown. By September 3, I’d finished reading the final Discworld novel. How do I feel about this?

Empty. Satisfied, but empty. The book is closed on the Discworld, at least in this form, and… well… I don’t think I can wrap my head around that.

But anyway, here’s my review of the novel. Spoilers beyond this point for The Shepherd’s Crown by the late Sir Terry Pratchett, and for the rest of the Discworld.

END_OF_DOCUMENT_TOKEN_TO_BE_REPLACED

Terry Pratchett is well-known in the world of genre writing mostly for his Discworld series. However, in the decades he’s been active, Pratchett has written several different stories outside of the Discworld. The latest is Dodger, a historical fantasy with all the charm of Discworld and none of the thousands of pages of background a new Discworld reader might need.

END_OF_DOCUMENT_TOKEN_TO_BE_REPLACED

This review contains spoilers for much of the Discworld series prior to Going Postal.

You’d be hard-pressed to find a bigger Discworld fan than me in my neighborhood. Probably in my zip code. Maybe in my county. So when I found Going Postal on Netflix, my head asplode. Because there was another live-action Pratchett miniseries for me to watch.

END_OF_DOCUMENT_TOKEN_TO_BE_REPLACED 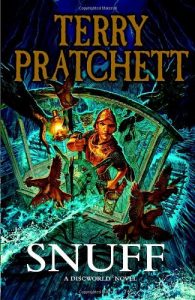