Terry Pratchett is well-known in the world of genre writing mostly for his Discworld series. However, in the decades he’s been active, Pratchett has written several different stories outside of the Discworld. The latest is Dodger, a historical fantasy with all the charm of Discworld and none of the thousands of pages of background a new Discworld reader might need. 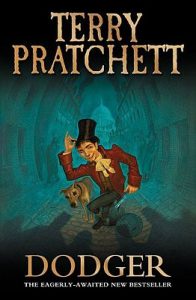 The eponymous main character of Dodger is a 17-year-old man (or boy, if you prefer) who lives in the more squalid part of Victorian-era London. He’s a tosher — that is, someone who searches the sewers for lost money. According to Dodger, you can make at least as good a living doing that as you can sweeping chimneys, and without the associated health problems. Dodger lives with an old watchmaker, Solomon Cohen, and Sol’s dog Onan, and Sol looks out for his young friend.

The story opens on a rainy night in London. Dodger is on the way home when he witnesses a young woman trying to escape from two men who are attacking her. Dodger isn’t one to stand by when a defenseless person is in trouble, so he intervenes and rescues her.

Problem is, the young woman may just be the tip of the iceberg when it comes to the political situation in London. And Dodger finds himself right in the middle of history in the making.

Dodger is up to the usual par in terms of Pratchett’s writing style. It’s sharp, funny, and full of the kind of dry humor that Pratchett’s fans have come to expect. In fact, it’s probably his best book since he was diagnosed with early-onset Alzheimer’s. He weaves in real-life events and people into his fictional narrative. The book’s main characters include Charles Dickens, Henry Mayhew, Benjamin Disraeli, and Sir Robert Peel, as well as fictional ones such Sweeney Todd. There’s a lot of humorous moments as well, such as when Dodger first encounters indoor plumbing — and, as an amateur ablutionologist*, bathroom scenes interest me.

But what’s great is that, even though Dodger is similar to Pratchett’s other stories — this novel borrows elements from Discworld, specifically the Watch novels and The Truth, among others — he still manages to present it in a new and interesting way. It feels like you’re out to lunch with a close friend, and she introduces you to an old friend of hers, and you hit it off right away because any friend of hers is bound to be someone you like.

You’ll like Dodger even if you’re not a Pratchett fan. But if you are, that makes it even better.

Note to Parents: While Dodger is a YA novel, it does contain violence, adult language, potty humor (sometimes literally so), poverty, squalor, and more than one kick to the genetalia. Though, I mean, in Alvin and the Chipmunks 2, which is rated PG, David Cross takes a toy motorcycle to the crotch, so make of it what you will. I’d say the book is acceptable for any YA reader, though of course you should use your own best judgment when it comes to your children.

* I believe I actually learned that word from Pratchett himself.