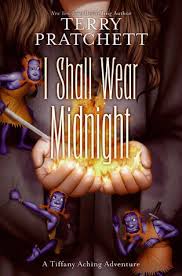 The world of genre fiction was dealt a serious blow when author Terry Pratchett announced that he suffered from early-onset Alzheimer’s disease. It didn’t stop him from writing, but it may have moved up the end of his writing career. His previous Discworld novel, “Unseen Academicals”, was – to my mind, anyway – full of plots and ideas that Pratchett may have wanted to cover in future novels but was afraid he wouldn’t be able to. I thought it made the book suffer.

Not so much with “I Shall Wear Midnight”, the latest – and possibly the last, depending upon the progress of Pratchett’s illness – Tiffany Aching novel.

“Midnight” begins when Tiffany is 16, and has taken on the mantle of the witch of the Chalk, a land in Discworld relatively close to Lancre. She does all the mucky jobs witches do – birthing babies, seeing to the sick, laying out the dead, and generally living and working near the edge. Early on, we are shown just how well Tiffany has learned her craft from Granny Weatherwax, “the most highly regarded of the leaders [witches] didn’t have” (“Wyrd Sisters”) when she has to deal with Seth Petty, who has beaten his pregnant teenage daughter so severely that she lost the baby.

And there we have the first insight that “Midnight”, while being a YA novel and shelved as such in many bookstores, is not for the immature. The thing is, after having read the book, that sequence is the most graphic and adult in the novel. To me it served a similar purpose to Shepherd Book’s death in “Serenity” – a character will be killed off, to show how serious this is. There’s a scene or two later in the book that reminds us, but it doesn’t hold a candle to what Seth Petty did.

I think we needed it, too, because the novel’s main villain, the Cunning Man – the spirit of a long-dead priest of Omnianism, a religion established in “Small Gods” and referred to many times throughout the series – is somewhat hard to wrap one’s head around. We’re told he comes back every few hundred years, and he fights the witches, and the witches generally win. He came back this time because Tiffany kissed the Wintersmith (in the book of the same name) and drew enough attention to herself.

The Cunning Man is the kind of villain that works well for a YA audience because it makes people do things they normally wouldn’t, against their will – similar to the hiver in “A Hat Full of Sky” – but it makes the book a little difficult to follow when it comes to the main plot. It’s like “Harry Potter and the Half-Blood Prince”: Harry has the Dursleys, school, Quidditch, the Voldemort War, being in love with Ginny, and he has to deal with the whole Voldemort thing… but that last one gets lost in the shuffle amid all the other story arcs. The same with “Midnight” – Tiffany has to handle a lot of things in this book besides the Cunning Man, including caring for the people of the Chalk, the imminent marriage of her friend Roland (son of the Baron), the Duchess’s treatment of her people, and Amber Petty (Seth’s daughter), who seems to really like the Nac Mac Feegle.

Oh, yes. The Feegles are back – Rob Anybody, Jeannie the Kelda, and fan favorite, Daft Wullie. Rob even puts aside his Feegle nature for a moment when the Baron’s men threaten their mound. It’s quite a moment. And speaking of people who are back, one of the best parts of the book is when Tiffany meets Granny Weatherwax’s other successful apprentice.

“Midnight” brings us all our favorite witches – Granny, Nanny, and even Magrat, along with mentions of Tiffany’s friends Petulia and Anagramma, and her teacher Miss Tick – as well as introducing Mrs. Proust, who has a very surprising connection to Boffo (see “Wintersmith”). Tiffany also meets Captains Carrot and Angua (glad to see she’s finally gotten that promotion), Constable Haddock, and the inimitable Commander Vimes. But the book takes place on the Chalk, for the most part, and despite the attendance of the senior witches – one of whom (and you can easily guess which) has fought the Cunning Man before – it’s Tiffany who must save the day.

I’ll be honest: I really didn’t care for “The Wee Free Men”, but the rest of the Aching books have been good, solid stories, and if this one meandered a bit and did contain a tad too much additional plot (Miss Smith, the Duchess and Leticia, Tiffany Goes to Ankh-Morpork – which really felt shoehorned in there), Pratchett is still a good enough storyteller to tie it up neatly at the end. If “I Shall Wear Midnight” turns out to be the final Tiffany Aching novel, then I for one am satisfied with how her arc ends.

Besides, that means we can get back to the business of making Vimes the next Patrician*.

* Oh, come on, you know that’s how the Discworld series will end.