This review contains spoilers for much of the Discworld series prior to Going Postal.

You’d be hard-pressed to find a bigger Discworld fan than me in my neighborhood. Probably in my zip code. Maybe in my county. So when I found Going Postal on Netflix, my head asplode. Because there was another live-action Pratchett miniseries for me to watch. 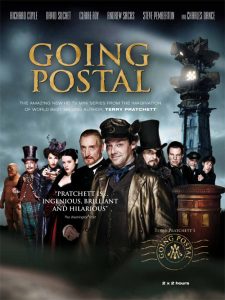 First of all, if you don’t know what the Discworld is, this article may help. Be warned that it may contain spoilers. Going Postal is the 33rd novel in the series, and was released in 2004. The miniseries came out in 2010.

Going Postal is the story of Moist Von Lipwig*, a con artist who prides himself on not doing anything violent. He just steals money and objects. Not a thief, nor a member of the Thieves Guild, Moist is just trying to succeed at his next con. And unlike many antiheroes on the Disc, he actually succeeds quite brilliantly.

But then the law catches up with him, in the form of Sergeant Angua, and Moist finds himself about to be hanged for the theft of $150,000 in bonds.

Here’s the thing, though: as a successful con man, Moist has proven that he has what it takes to get people to listen to him, to believe in him, and to succeed where others might fail. This has brought him to the attention of the Patrician (the guy in charge of the city of Ankh-Morpork, the biggest and “best” city on the Disc). The Patrician is fed up with the clacks (a long-distance semaphore-based communication system) and he wants some competition, so he engineers a way for Moist to come work for him.

Moist, though displeased, knows that you do not cross the Patrician. He accepts the job of Postmaster and, along with his staff of Mr. Pump, Junior Postman Groat, and Stanley, begins the unenviable task of restoring a government entity to its former glory. Along the way he must deal with the clacks company, a golem, a very spirited horse, a massive fire, and a conspiracy to commit multiple murders. Plus the undelivered mail itself is talking to Moist…

It all adds up to a harrowing, hilarious, something-else-beginning-with-H adventure that, as a fan of the Discworld, I certainly enjoyed.

Going Postal stars Richard Coyle (Covert Affairs, Coupling) as Moist. I have to admit that, when I read the book, I thought of Moist as a younger man, maybe in his early 30s. Coyle, though, is in his early 40s. He’s a fine actor and he communicates a lot with his face; he just wasn’t what I was expecting. I did, however, have some issues with his pursuit of Adora, the leader of the Golem Trust. Claire Foy (Upstairs Downstairs), who played Adora, is in her 20s, and while I have no problem with age differences in relationships, I seem to remember in the book that they were close to the same age. Foy also wasn’t quite… I think the word I want is “ascetic”… enough for Adora — she hit the lines, but I don’t know that I bought her, at least in the beginning, as the character.

The other standout casting choice was Charles Dance (Game of Thrones, Bleak House) as the Patrician. In The Color of Magic, the Patrician was played a bit more comically by Jeremy Irons (The Borgias, Lolita), and he used a lisp that didn’t fit the character. Dance, however, brought a true gravitas to the role and played him as someone worthy of respect and fear — as Vetinari should be.

Director Jon Jones (a veteran TV director) did a good job helming the film, which was produced by, among others, Vadim Jean (who has been involved in both Hogfather and The Color of Magic. Richard Kurti and Bev Doyle wrote the screenplay. Music came from John Lunn (Downton Abbey), and it was mostly incidental — I feel that comedies sometimes rely too much on strings and “funny” notes instead of giving the music its own character. I didn’t notice the music enough to like or dislike it.

As for the adaptation… well, I mean, there are certain things you can’t get away with in a televised adaptation of a novel. There are details from previous stories, appearances of minor characters who can’t be drawn in broad strokes (such as Sam Vimes), and special effects that just don’t work without a multi-zillion-dollar budget. That said, Going Postal‘s effects pretty much fall into two categories: practical (semaphore machines, buildings on fire, creatures and costuming) and dream-sequence. For the most part, there wasn’t much “magic” going on, other than one werewolf transformation that looked pretty digital and a few dream sequences that looked as reliant on practical effects as possible. I was reminded, in a way, of a featurette I saw about Eternal Sunshine of the Spotless Mind in which it was explained how Michel Gondry did all the effects for that film in-camera and on-set. I appreciate that kind of hard work, especially in an era when SyFy can crank out a film every month or so and spend relatively little to create some decent CG special effects.

Going Postal was a pretty good entry into the “adapted Discworld” canon. It was fun, funny, and faithful to the book. It’s not really accessible to non-Discworld fans, but I think the nice thing about British TV is that they’re willing to make something that might not necessarily be. Plus, Going Postal starts the Moist von Lipwig arc, which means it’s a good place to pull onto the highway — so to speak. I recommend this miniseries to every Discworld fan, any fan of comic fantasy, and anyone who’s a fan of British humor that isn’t too British. Also, stamp collectors.

Note to Parents: This miniseries contains adult language, violence, and adult concepts. However, there isn’t any sex, and the violence isn’t explicit. I’d rate this PG if it wasn’t for the language, so let’s call it PG-13. Of course, you should use your own best judgment when it comes to your children.