Her neighbor — the other one, across the hall — helped her figure it out, long before the math geeks finished crunching their numbers.

“Watch,” he’d said, and laid a deck of cards facedown on her coffee table. (There was coffee in the cups, with a generous dollop of Bailey’s. He was a nice-enough guy that Adele felt comfortable offering this.) He shuffled it with the blurring speed of an expert, cut the deck, shuffled again, then picked up the whole deck and spread it, still facedown. “Pick a card.”

“Only two of those in the deck,” he said, then shuffled and spread again. “Pick another.”

She did, and got the other Joker.

“Coincidence,” she said. (This had been months ago, when she was still skeptical.)

From Babel’s Fall’n Glory We Fled…

Imagine a cross between Byzantium and a termite mound. Imagine a jeweled mountain, slender as an icicle, rising out of the steam jungles and disappearing into the dazzling pearl-grey skies of Gehenna. Imagine that Gaudí—he of the Segrada Familia and other biomorphic architectural whimsies—had been commissioned by a nightmare race of giant black millipedes to recreate Barcelona at the height of its glory, along with touches of the Forbidden City in the eighteenth century and Tokyo in the twenty-second, all within a single miles-high structure. Hold every bit of that in your mind at once, multiply by a thousand, and you’ve got only the faintest ghost of a notion of the splendor that was Babel.

Now imagine being inside Babel when it fell.

Sliding his hands over the clay, Sly relished the moisture oozing around his fingers. The clay matted down the hair on the back of his hands making them look almost human. He turned the potter’s wheel with his prehensile feet as he shaped the vase. Pinching the clay between his fingers he lifted the wall of the vase, spinning it higher.

Someone banged on the window of his pen. Sly jumped and then screamed as the vase collapsed under its own weight. He spun and hurled it at the picture window like feces. The clay spattered against the Plexiglas, sliding down the window.

Narration first appeared at and produced by Starship Sofa. Special thanks to Tony Smith and Diane Severson for their kind permission to resyndicate this award nominee.

She sets a stepladder next to it. She claps her hands and the 26 monkeys onstage run up the ladder one after the other and jump into the bathtub. The bathtub shakes as each monkey thuds in among the others. The audience can see heads, legs, tails; but eventually every monkey settles and the bathtub is still again. Zeb is always the last monkey up the ladder. As he climbs into the bathtub, he makes a humming boom deep in his chest. It fills the stage.

And then there’s a flash of light, two of the chains fall off, and the bathtub swings down to expose its interior.

Narration first appeared at and produced by Starship Sofa. Special thanks to Tony Smith and Ray Sizemore for their kind permission to resyndicate this award nominee.

But in the normal course of life, our need for air is far from our thoughts, and indeed many would say that satisfying that need is the least important part of going to the filling stations. For the filling stations are the primary venue for social conversation, the places from which we draw emotional sustenance as well as physical. We all keep spare sets of full lungs in our homes, but when one is alone, the act of opening one’s chest and replacing one’s lungs can seem little better than a chore. In the company of others, however, it becomes a communal activity, a shared pleasure.

“I’m sure,” I said. “Somehow, lunch seems pretty trivial after you’ve been thinking about God all morning.”

“The Creator of all things,” I explained.

“My creator is Stanley Kalinovsky, sir,” said Jackson. “I was not aware that he created everything in the world, nor that his preferred name was God.”

I couldn’t repress a smile.

When you’re as old as I am, you’ll find your memory’s not what it was. It’s not that you lose memories. That hasn’t happened to me or anyone else since the Paleocosmic Era, the Old Space Age, when people lived in caves on the Moon. My trouble is that I’ve gained memories, and I don’t know which of them are real. I was very casual about memory storage back then, I seem to recall. This could happen to you too, if you’re not careful. So be warned. Do as I say, not as I did.

Some of the tales about me contradict each other, or couldn’t possibly have happened, because that’s how I told them in the first place. Others I blame on the writers and tellers. They make things up. I’ve never done that. If I’ve told stories that couldn’t be true, it’s because that’s how I remember them.

Rated PG. Contains dark, seedy places and dark, seedy characters, only a few of them alive. 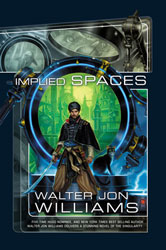 A Small Room in Koboldtown

That Winter, Will le Fey held down a job working for a haint politician named Salem Toussaint. Chiefly, his function was to run errands while looking conspicuously solid. He fetched tax forms for the alderman’s constituents, delivered stacks of documents to trollish functionaries, fixed L&I violations, presented boxes of candied John-the-Conqueror root to retiring secretaries, absent-mindedly dropped slim envelopes containing twenty-dollar bills on desks. When somebody important died, he brought a white goat to the back door of the Fane of Darkness to be sacrificed to the Nameless One. When somebody else’s son was drafted or went to prison, he hammered a nail in the nkisi nkonde that Toussaint kept in the office to ensure his safe return.

He canvassed voters in haint neighborhoods like Ginny Gall, Beluthahatchie, and Diddy-Wah-Diddy, where the bars were smoky, the music was good, and it was dangerous to smile at the whores. He negotiated the labyrinthine bureaucracies of City Hall. Not everything he did was strictly legal, but none of it was actually criminal. Salem Toussaint didn’t trust him enough for that.

Referenced Sites:
2008 Hugo Awards
“First of May” by Jonathan Coulton (Not work-safe)

“Let me show you,” I said, pulling out my wallet. I took my Deirdre’s photo out and handed it to her.

“It’s uncanny,” she said, studying the picture. “We even sort of wear our hair the same way. When was this taken?”

They would have called her salvage, if there were anyone left to salvage her. But she was the last of the war machines, a three-legged oblate teardrop as big as a main battle tank, two big grabs and one fine manipulator folded like a spider’s palps beneath the turreted head that finished her pointed end, her polyceramic armor spiderwebbed like shatterproof glass. Unhelmed by her remote masters, she limped along the beach, dragging one fused limb. She was nearly derelict.

The beach was where she met Belvedere.