From Babel’s Fall’n Glory We Fled…

Imagine a cross between Byzantium and a termite mound. Imagine a jeweled mountain, slender as an icicle, rising out of the steam jungles and disappearing into the dazzling pearl-grey skies of Gehenna. Imagine that Gaudí—he of the Segrada Familia and other biomorphic architectural whimsies—had been commissioned by a nightmare race of giant black millipedes to recreate Barcelona at the height of its glory, along with touches of the Forbidden City in the eighteenth century and Tokyo in the twenty-second, all within a single miles-high structure. Hold every bit of that in your mind at once, multiply by a thousand, and you’ve got only the faintest ghost of a notion of the splendor that was Babel.

Now imagine being inside Babel when it fell. 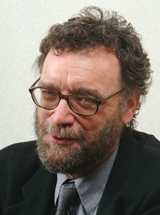 Michael Swanwick has received the Hugo, Nebula, Theodore Sturgeon, and World Fantasy Awards for his work. Stations of the Tide was honored with the Nebula Award and was also nominated for the Hugo and Arthur C. Clarke Awards. “The Edge of the World,” was awarded the Theodore Sturgeon Memorial Award in 1989. It was also nominated for both the Hugo and World Fantasy Awards. “Radio Waves” received the World Fantasy Award in 1996. “The Very Pulse of the Machine” received the Hugo Award in 1999, as did “Scherzo with Tyrannosaur” in 2000. His stories have appeared in Omni, Penthouse, Amazing, Asimov’s, High Times, New Dimensions, Starlight, Universe, Full Spectrum, Triquarterly and elsewhere. Many have been reprinted in Best of the Year anthologies, and translated for Japanese, Dutch, German, Italian, Portuguese, Spanish, Swedish, French and Croatian publications. His books include In the Drift, an Ace Special; Vacuum Flowers; Griffin’s Egg; Stations of the Tide; The Iron Dragon’s Daughter, a New York Times Notable Book, and Jack Faust; his short fiction has been collected in Gravity’s Angels, A Geography of Unknown Lands, Moon Dogs, Tales of Old Earth, and a collection of short-shorts, Cigar-Box Faust and Other Miniatures. He lives in Philadelphia with his wife, Marianne Porter, and their son, Sean.