Archive for For Kids

Vixen had just one question for the doctor:
“Can you do it?”

Doctor Fizzwinkle smiled and patted the fur on Vixen’s neck. Outside of the office, the winds whipped furiously, as they did most of the time north of the Arctic Circle. In the office, though, the glow of fluorescent light and the smell of rubbing alcohol made Vixen feel secure and cared for.

“I’m afraid not,” he said. “The procedure you heard about is simple in principle―I would take DNA samples of you and Mr. Vixen, then analyze the cells to see your genetic predispositions, and manipulate the chromosomes to produce the calf that you and your husband desire.”

“Then why not?” Vixen said, stamping her hooves in a little dance.

“Well, everything is simple in principle,” the Doctor said. “But I’ve never done it before.”

Vixen smiled and shook her antlers. She nuzzled against Doctor Fizzwinkle. All the reindeer, indeed all of the animals in the North Pole, loved the good doctor, the best veterinarian north of sixty-six degrees latitude.

“Have you and Mr. Vixen tried all of the techniques I presented? Did he take the pills I prescribed?”

“Give it time, and patience, and you can certainly have a healthy, normal calf.”

“But I don’t want a normal calf!” blurted out Vixen. The Doctor smiled sadly and shook his head.

END_OF_DOCUMENT_TOKEN_TO_BE_REPLACED

Sponsored by CONTAGIOUS, by Scott Sigler. 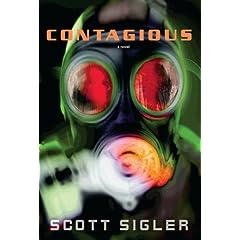 People ask me if I ever get involved with the subjects of my documentaries. I have a difficult time imagining that they would ask my male colleagues the same question, but they seem to expect women to be more emotional. In response, I tend to grit my teeth and answer very patiently with another question. How could I do my job if I were part of the story? Only by maintaining a sacred distance could I have any hope of understanding someone’s life. A documentarian records, but does not participate.

“Sometimes we don’t realize that what we want isn’t good for us,” the man said, speaking for the first time. He stared intently at Kallakak.

“Dominance rituals do not work well on me,” Kallakak said, roughening his voice to rudeness. “I will see you in five days in the court.” He decided not to burn his bridges too far. “I will tally up the cost of my goods by then and will have a definite figure.” Let them think him acquiescent while he tried to find another way to save his shop. He stepped into the lift, but they did not follow him, simply watched as the doors slid closed and he was carried away.

Making his way back to his quarters, he saw three figures standing before it. He paused, wondering if the Jellidoos had decided to lean on him further. The trio turned in unison to face him, and he recognized them with a sinking heart. The cousins.

Which is why she was hoping that the venture capitalist would just leave her alone. He wasn’t a paying customer, he wasn’t a fellow artist — he wanted to *buy* her, and he was thirty years too late.

“You know, I pitched you guys in 1999. On Sand Hill Road. One of the founding partners. Kleiner, I think. The guy ate a salad all through my slide-deck. When I was done, he wiped his mouth, looked over my shoulder, and told me he didn’t think I’d scale. That was it. He didn’t even pick up my business card. When I looked back as I was going out the door, I saw his sweep it into the trash with the wrapper from his sandwich.”

The VC — young, with the waxy, sweaty look of someone who ate a lot of GM yogurt to try to patch his biochemistry — shook his head. “That wasn’t us. We’re a franchise — based here in LA. I just opened up the Inglewood branch. But I can see how that would have soured you on us. Did you ever get your VC?”

When I was a little girl, I thought my mother’s name was Yuki, which means snow. That was part of her name, but I didn’t learn the rest of it until the night my father died.

My mother left us on a slate-gray evening when I was five, with her namesake falling from the sky and piled high around the windows and doors. Awakened by raised voices, I watched through a tear in the curtain that shielded my sleeping mat as my mother wrapped her limbs in a shining, white kimono. As far back as I could remember, she had always worn the dark wool shifts that all mountain people wear, spun from the hair of the half-mad goats that give us milk and cheese. In her kimono she looked like a princess, or a queen. Her skin was paler than mine, and I am thought quite fair. Roku, the boy who lived on the northern crest, used to tease me when we were little, calling me “ghost girl” and “milk face.”

Referenced Sites:
EP070: Squonk the Dragon
“How to Talk to Girls at Parties” by Neil Gaiman
2007 Hugo Nominees

Without thinking, Wendel answered. “An apprentice is young person who wants to be a wizard, so they find an older wizard to teach them.”

The moment the words left his mouth, Wendel’s heart stopped and his eyes went wide. If he’d known a spell that could grab those words and stuff them back down his throat, he would have cast it.

Instead, those words scampered all the way across his bedroom, as words are inclined to do, and rushed into the ears of the dragon in the window. Wendel watched in horror as the words sunk into Squonk’s brain. Squonk’s eyes grew wide, his mouth dropped open, and before Wendel could think of anything to say–

“You can learn to be a wizard?! That’s awesome! I wanna be a wizard! Lemme be your ‘prentice!”

He went to the Sci-Fi shelf–and had another shock. “I, Robot” was there, but not the forgettable action movie with Will Smith–this was older, and the credits said “written by Harlan Ellison.” But Ellison’s adaptation of the Isaac Asimov book had never been produced, though it had been published in book form. “Must be some bootleg student production,” he muttered, and he didn’t recognize the name of the production company. But… but… it said “winner of the Academy Award for Best Adapted Screenplay.” That had to be a student director’s little joke, straight-facedly absurd box copy, as if this were a film from some alternate reality. Worth watching, certainly, though again, he couldn’t imagine how he’d never heard of this. Maybe it had been done by someone local. He took it to the counter and offered his credit card.

She looked at the card dubiously. “Visa? Sorry, we only take Weber and FosterCard.”

The question was rather unnecessary. Beta was almost at zenith, its ruddy light flooding the landscape to an unusual orange as the brilliant rays of setting Gamma died. Beta was at aphelion. It was small; smaller than Theremon had ever seen it before, and for the moment it was undisputed ruler of Lagash’s sky.

Lagash’s own sun, Alpha, the one about which it revolved, was at the antipodes, as were the two distant companion pairs. The red dwarf Beta — Alpha’s immediate companion — was alone, grimly alone.

Aton’s upturned face flushed redly in the sunlight. “In just under four hours,” he said, “civilization, as we know it, comes to an end. It will do so because, as you see, Beta is the only sun in the sky.” He smiled grimly. “Print that! There’ll be no one to read it.”

The Boy Who Yelled “Dragon!”

Now, this Land was the home of exceptionally brave warriors and beautiful damsels (and occasionally they were the same person, since beautiful damsels were pretty assertive back then). Each young boy and girl was taught all the arts of warfare, and were soon adept with sword, mace, lance, bow and arrow, dagger, and the off-putting snide remark. They were schooled in horsemanship, camouflage, and military strategy. They learned eye-gouging, ear-biting, kidney-punching, and — since they were destined to become knights and ladies — gentility.

So successful was their training that before long enemy armies were afraid to attack them. Within the borders of the Land justice was so swift that there was not a single criminal left. It
would have been a very peaceful and idyllic kingdom indeed — except for the dragons.

Rated G. Contains nothing age-inappropriate. However, some listeners may find it excessively sad.

We go through the whole book.

“Barnaby is an ape,” she says. “There is no picture of an ape in the book.”

I wonder if there are any other Barnabys in the world, and if they are lonely too.