Which is why she was hoping that the venture capitalist would just leave her alone. He wasn’t a paying customer, he wasn’t a fellow artist — he wanted to *buy* her, and he was thirty years too late.

“You know, I pitched you guys in 1999. On Sand Hill Road. One of the founding partners. Kleiner, I think. The guy ate a salad all through my slide-deck. When I was done, he wiped his mouth, looked over my shoulder, and told me he didn’t think I’d scale. That was it. He didn’t even pick up my business card. When I looked back as I was going out the door, I saw his sweep it into the trash with the wrapper from his sandwich.”

The VC — young, with the waxy, sweaty look of someone who ate a lot of GM yogurt to try to patch his biochemistry — shook his head. “That wasn’t us. We’re a franchise — based here in LA. I just opened up the Inglewood branch. But I can see how that would have soured you on us. Did you ever get your VC?” 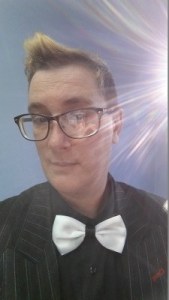 A. J. Fitzwater is a dragon wearing a human meat suit from Christchurch, New Zealand. A graduate of Clarion 2014, she’s had short fiction published in Beneath Ceaseless Skies, Crossed Genres Magazine, and other venues of repute. Look out for upcoming stories in Shimmer Magazine and The Future Fire. She has done narrations across all Escape Artist podcasts, as well as Redstone SF, Interzone, and Wily Writers.

Find more by A. J. Fitzwater