Well, Laurell K. Hamilton has done it again. She’s written a pretty decent police procedural and then tacked on about 300 pages of relationship angst. Yes, that’s right, it’s time for me to review Crimson Death, the latest Anita Blake novel.

Warning: potential spoilers for the first 24 books in the series. 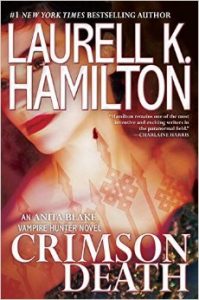 Look, you’ve heard my complaints before: too much inner monologue, too much angst, takes too long to get to the plot, the sex is unrealistic, and she needs to kill off about 75 percent of her characters. So I won’t waste your time with that. Just read my previous reviews of Hamilton’s books for some insight on those topics.

Here’s the main plot of Crimson Death: Ireland, the one place on Earth with no vampires (because of fey magic), is under siege by vampires. Anita Blake has been called in by her best friend Edward to try and stop the vampiric menace. But when she finds out that one of her closest vampire friends spent centuries living in Ireland, she has no choice but to bring him along. Even if he doesn’t want to go.

After 24 books, Anita has picked up a lot of powers and jobs. She’s a vampire hunter, a necromancer, a US Federal Marshal, a lycanthrope that doesn’t change shape, a succubus who feeds on sex and/or anger, the fiancee of the vampire king of the Americas as well as two other primary lovers, and part of several other relationships. (Anita’s entry into polyamory came when Hamilton herself discovered that she was polyamorous — she is currently out as such — and I will give Hamilton a ton of credit for focusing on how to do healthy polyamory. Problem is, polyamory takes communication to work properly, and that can get really boring when the same issues are rehashed, book after book.)

This particular book focuses on Anita’s relationships with:

Whew. That took a while.

Anyway, I won’t spoil the main villain of the book, or the power that Anita uses to defeat said villain (because, let’s be real here, is Anita ever going to lose a fight?), but I will say that once we get to Ireland the story really picks up. Before then it’s meandering and repetitive, and one night (maybe two) of activity is stretched over 30-plus chapters — including several that take place on an airplane (Anita is phobic of flying, as we’ve been told countless times over the years) and are just as repetitive.

I’ll give Hamilton one more plus-point: she does kill off a character in this book. Unfortunately, it’s not one of the ones I would have preferred, but… baby steps, kiddo. Baby steps. I still think she needs to chop out a swath of them. But like many of us who are writers, she loves her characters and wants us to love them too. And, despite myself, I actually do like some of them. They’re the reasons I keep reading these books: I want to know how Nathaniel’s character develops; I want to know more about Claudia; I want to keep tabs on Jason; I like seeing Irving and Willie (are they even alive anymore?); watching Zerbrowski’s arc across the books is enjoyable; and when Jean-Claude is given a plot beyond clothes, sex, and relationship angst, he’s a pretty compelling character.

I could, however, do without almost all the weretiger stuff. It’s were-tigersome. (Get it? No? Moving on.)

I will say without reservation that this book is way better than some of the crappy middle ones — I’m looking at you, Cerulean Sins, Skin Trade, and to a lesser extent Hit List. It’s not quite as good as Affliction, or as the non-boring parts of Dead Ice, but it’s all right. If you like this series, you’ll like this book. If you’re just hanging around until it gets better, you’ll probably like it too. But this is by no means a book you can just pick up and read out of the blue, which leads to a lot of tiresome exposition.

And, yes, a few sex scenes, but in the grand scheme of things they actually make sense. If only it didn’t take so much angst to get to them.

Note to Parents: This book contains explicit sex and violence, and is not for readers under 18. Of course, you should use your own best judgment when it comes to your children.

Note to Polyamorists and Potential Polyamorists: Don’t think that just because Anita has a zillion relationships and makes them work that you can do the same. Think about how hard it is to maintain one. Now double it. Now triple it. You get the point. It works for Anita because it’s fiction, but also because of the communication overload. Think very carefully before you open your marriage or add additional relationships, and don’t use any work of fiction as your guide. If you’re really interested in this, pick up a copy of More Than Two and go from there.

About the Reviewer: Josh Roseman (not the trombonist; the other one) lives in Georgia and engages in pogonotrophy on a regular basis, as well as occasionally suffering from sphenopalatine ganglioneuralgia. He has been published by — among others — Asimov’s and Escape Pod, and in 2015, he released his first collection, The Clockwork Russian and Other Stories. His new time-travel novelette, Memories of My Father, is coming to Amazon later this month. When not writing, he mostly complains that he’s not writing. Find him online at roseplusman.com, or on Twitter @listener42.