The following review contains minor spoilers for Kiss the Dead and moderate spoilers for all preceding Anita Blake novels. It also contains discussion of sexual material. Reader discretion is advised.

Hmm… okay, so, we start with police procedural, and our hero shows up on the scene. She’s got a crap-ton of weapons and abilities, and she uses them to be a monster and save the day, sort of, except that nothing really happens and, twenty chapters later, we’re going back to the station for her to have the new guy — let’s make him a gigantic freaking red herring, just for the sake of argument — come out to someone he’s never met. Add in some drama with the other female cops before the hero goes home to her polyamorous lifestyle and has sex with two gorgeous, exceedingly well-endowed men before being even more dramatic, going to a hostage situation, and then dealing with vampire issues. Then she has still more sex with still more well-endowed men — all of whose eyes and hair we get intimate knowledge of — and obsesses over the fact that, holy crap, I’m in a semi-successful polyamorous relationship, what must be wrong with me??? before sitting down for a discussion and having a little action scene at the very end that she’s not even in the same room for most of, and…

…and then the book just stops. 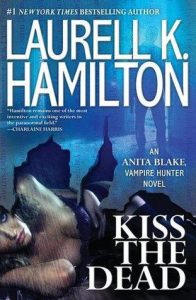 Over the years, Hamilton’s heroine has gone from someone we could get behind as an underdog to the biggest, baddest wolf* on the block. In each of the books, starting with Obsidian Butterfly, she’s leveled up in power until she’s become pretty much unbeatable. It’s sort of a game I play with myself these days — how will Hamilton put her heroine into legitimate danger this time around? Recently we’ve faced vampire hit squads, a werewolf serial killer, and the queen of all vampires herself — who, by the way, was a pretty good Big Bad until she met her unceremonious end. This time, it’s rather prosaic, all things considered.

A lot of stuff seems to have happened between Hit List (the last novel) and Kiss the Dead (which, by the way, contains very little kissing of the dead; I’m not sure why that was the title). With the death of the Mother of All Darkness, one of Anita’s many lovers, Jean-Claude, appears to have taken the reins of all vampire-dom. Fortunately, JC is a reasonably-honorable vampire and his minions seem to like him. Not everyone — which leads to the main tension of the novel — but most. Hamilton tried to stretch the time-scale out a bit with this book, retconning that Anita “disappeared for six months at a time” to go get a handle on her metaphysical abilities with her friend in North Carolina — this has been discussed in previous novels — and I do applaud her for that, because otherwise the scale of the 20 novels over the past 20 or so years wouldn’t have really fit so well.

This particular book begins at a crime scene where two police officers have been killed. It allows Hamilton to re-introduce and re-set all our pieces: herself, Zerbrowski, the SWAT guys she’s been working with, and all of Anita’s powers. Later, she just sort of writes off the conflict between Anita and Dolph, saying he “got help” for his issues with her. I was disappointed. In fact, I was almost on the verge of disappointment for pretty much the whole first half of the book — it’s like, “action action talk talk talk talk mental stuff oh yeah I have all these boyfriends action talk talk talk talk be a monster create a new divide between people remind us who everyone is aaaaaaand… scene”. Add to that the constant reminders of everyone’s hair and eye color, body type, and general preternatural skill level, and I got tired of it really fast.

Then we move to the police station, where we again re-set with everyone we already know, except that now we’re reminded of something totally useless: Detective Arnet has issues with Anita. Oh, goody; this totally is a productive use of my time. At least there was Zerbrowski, who really is a great sidekick character for Anita.

Anyway, after that, Anita goes home and we’re reintroduced to all of her bed partners: her primaries, Micah and Nathaniel; her other lovers, including Nicky and Cynric and the other ones I can’t remember; and the vampires, who are mentioned but don’t show up until later. Hamilton tries really hard to make us care about everyone, but Anita spends so much time in her own head and making things difficult for herself that I just don’t care. Eventually we get to the Circus of the Damned, and we get to hang out with Jean-Claude for a bit (I’ve always liked his character) and deal with our Asher problem (I stopped liking him after three books). Anita has more sex, talks way too much, gets overly into the mechanics of oral sex and sex on locker-room benches, and is finally called away to meet with a minion of the new Big Bad.

Without giving away the ending, let’s just say it’s not nearly as explosive as I’d hoped.

I really looked hard at this book, trying to find things I liked. And there were a few. To wit:

Now, don’t get me wrong — I respect the fact that Laurell K. Hamilton is making a living with these books, and that she has the freedom to be a writer and nothing but. And, for my sins, she’s created characters that I actually care enough about to keep buying the books because I need to know what’s happening to them. I can deal with all the other stuff as long as I get what I want out of the books. But seriously… these have got to get better in the plot department, and someone needs to tell Anita to step out of her damn head enough that the first 30 chapters aren’t a single four-hour period. It’s exhausting.

Overall, this was a pretty average Anita Blake story with a “oh, crap, now I need to find a way to end this book” finish tacked onto something that could’ve been a lot better. It was no The Killing Dance or even Narcissus in Chains, but it was much better than Cerulean Sins could ever hope to be. So at least there’s that.

Note to Parents: This novel contains explicit sex and explicit violence, but oddly enough, no drug use. Go figure. It is not intended for readers under the age of 18. As usual, you should use your own best judgment when it comes to your kids.

And also, just a tip — don’t think that the way Anita has sex is the way most people do it. Try to do some of those things and you’re going to get hurt. Anita Blake is a fictional character with supernatural powers. You are a human being. I really think someone needs to tell readers (and writers) that not every guy is super-gorgeous with a super-sized penis, and not every girl likes to have sex with a guy who’s emulating a jackhammer.