This review contains spoilers for the first 21 Anita Blake novels.

You’d think after 22 books, most of which made the New York Times bestseller list, that editors would swoop in and get a very popular author to fix some of the stuff that’s… let’s say “not optimal”… about her writing.

I just recently finished Affliction, the latest Anita Blake novel by Laurell K. Hamilton, and while it had a lot of really good action sequences, some of the problems that plague the other tales are just as evident in this one.

Affliction begins a few months after Kiss the Dead. The Mother of All Darkness is dead, and Jean-Claude, the Master of St. Louis, is the king of all the vampires in the U.S. Anita Blake, his human servant and necromancer extraordinaire, has helped to destroy other vamps that have tried to go up against Jean-Claude. She’s finally got her love life in order, too.

And then she gets a call from a woman claiming to be the mother of her primary lover, Micah. Micah’s estranged father is dying of an incurable disease, one that’s turning him into a zombie, and she wants her son to come home so he can make peace. When they get there, though, they find that the creature who’s causing the zombie disease has broken nearly every rule Anita thought was iron-clad when it comes to vampires and zombies, and it’s up to her and her team to stop it before it causes, quite literally, a zombie apocalypse.

And that’s where this book really falls down. See, Laurell Hamilton writes some fabulous action sequences. She’s got it down. She does extensive research on weapons, fighting techniques, and law enforcement. And it shows. The chapters in this book from when Nathaniel shapeshifts to the climax of the helicopter part are great, and the zombie battle in the hospital is equally good — both sections are well-paced, quick, and tightly-written. In them the reader gets a look at just how good a writer Hamilton really is; I think, if she put her hand to standard SWAT action-adventure and avoided the sex, she could put out yet another well-received series of books.

Except for, as I said, all the talking. The first ten or so chapters of this book are all talk — infodumps about what’s happened in the past few months, who’s who, what powers does Anita have, and so on. It’s extremely boring, and the casual reader not invested in the series wouldn’t have kept reading. Which sucks because said casual reader would miss out on the great action parts later on. But even amid action — and sex — there’s just so much talking, and talking, and talking. Especially during the sex scenes; two of the three take place in a shower and I swear there’s a ten-minute discussion while everyone figures everything out. Talking in the shower requires loud voices to be heard over the water; you can’t have a heart-to-heart talk. Hell, “pass the shampoo” is difficult enough. 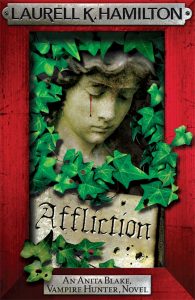 Other than the overabundance of talking, some really obvious repetition (Anita thinks something, and then she or another character says it a few paragraphs later in exactly the same words), and the fact that Hamilton can’t bring a character into a scene without spending one to five paragraphs giving us a physical description (eyes, hair, height, body type, clothing) and all the information about that character from every past book, the only real issue I had with this one was that the final villain was a little too hard to figure out. I’ve read every Anita Blake book, and this is probably the second or third where the villain is too obfuscated. I guess it made sense who it ended up being, and there’s a pretty big red herring or two, but I think in stories like this readers need enough context clues to be able to think back on what they’ve read and say “oh, yeah, I can’t believe I missed that.” This villain, I totally wasn’t expecting.

On the whole, Affliction is actually a pretty good Anita Blake novel. I did enjoy reading it, once we got to Colorado. It’s not without its problems, but I firmly believe that a good editor who isn’t afraid to tell a very successful writer “you have to change these things to make the book better” would make the next Anita book so much stronger. Fans of the series will like this one; casual readers, if they can hang out past the first ten chapters, probably will as well.

And, by the way, to that nonexistent editor I just mentioned in the previous paragraph: please tell Hamilton to pare down her character list. It’s getting ridiculous… and Asher is coming back in the next one.

Note to Parents: This book contains explicit sex, explicit violence, explicit language, gore, and some pretty disgusting scenes. It should not be read by anyone under 18. Of course, you should use your own best judgment when it comes to your children.