So here’s the thing about Serpent’s Storm, the third Death’s Daughter book by Amber Benson: at first I thought she’d turned into Laurell K. Hamilton. Then I thought she was writing a madcap roller-coaster adventure. Then I got completely lost. Once I got to the end, I was really pleased with the destination… but unfortunately the journey didn’t work for me.

Calliope Reaper-Jones is the middle of Death’s three daughters, and all she ever wanted was to be a normal girl. When her father and older sister were kidnapped in the first book, Death’s Daughter, Callie was yanked out of her mundane job and sent on a quest to determine if she was worthy — and that was before she could even rescue her family. Then in Cat’s Claw, the second book, Callie found herself becoming a pawn of several old Egyptian gods, including Bast — her father’s spirit guide. That book ended with Callie’s crush Daniel (who just happens to be the Devil’s protege) coming back to life. 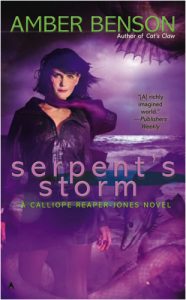 Serpent’s Storm began as something more than just a little lights-down R-rated sexual activity. I felt my eyes going wide as Callie and Daniel had sex right there on the page, mostly because, despite the fact that Callie is a woman and has every right to do what she wants with her lover, it didn’t seem to fit the story and the storytelling. I found myself slightly disappointed by the sex scene, in point of fact.

Unfortunately, that was the most sensible part of the story for several chapters. Over the next couple hundred pages, Callie commits murder, loses people she loves, turns into a sea serpent, learns secrets about her boss, checks in with her talking dog, performs a lewd act in public (in what is probably the most incongruous scene in the entire novel), and brings up some pretty stinky burps.

Luckily, things start to settle down after Callie confronts the Ender of Death and reunites with someone she thought she’d never see again, and after the Boss Fights at the end, the conclusion is very satisfying, as is the final page in the novel.

Of the books of Benson’s I’ve read so far, this is probably my least favorite despite the strong finish. I’m not sure how well it was received overall. Amazon’s reviewers give it an average of 4.5 stars, GoodReads 3.6, and Google Books 3.0 (though many of their reviews are scraped from GoodReads). I think my biggest problem with the book was that everything between the end of the sex scene and the scene with Marcel in the subway station made no sense. Callie goes from place to place; things just happen to her without her control. And we’re talking about an immortal person here who might just become the next incarnation of Death someday. For someone that strong, she’s pretty passive. It’s annoying.

As I said, this is the weakest of the first three Death’s Daughter books. I regrettably can’t recommend it to anyone who hasn’t read the first two, and it’s really going to take readers just hanging on for the ride and not questioning why everything is happening to have the right level of enjoyment. The book doesn’t turn me off to the character — I really want to see how things change for her now that certain things have happened that I don’t want to spoil. It doesn’t turn me off to the author, either — I like her style and her pacing. I just think this book needed some rewriting to clear up the issues I mentioned. It’s too bad, too, because as I said the ending is very good.

If only the rest of the book was too.

Note to Parents: This book contains explicit sex and graphic violence, some of it brutal in nature. It is not appropriate even for mature teens, although they will probably appreciate the main character’s voice. Of course, you should use your own best judgment as it relates to your children.