Okay, I’m not going to lie to you: I got myself a copy of Death’s Daughter by Amber Benson because, hey, Tara wrote a book.

Yes, I know, I know, the actor is not the character. And yes, I’ve seen other work Benson has written, performed, and directed. I was kind of expecting a certain type of novel, and to a certain extent, I did get it.

I also apparently stumbled into chick-lit. How did that happen?

I have a thing about Death stories. My favorite is, of course, the Death of the Discworld (black cloak, scythe, TALKS LIKE THIS), followed by Neil Gaiman’s perky goth-girl Death of the Endless. Somewhere on the continuum is Piers Anthony’s Zane/Death from On a Pale Horse. I think Calliope Reaper-Jones falls a little ahead of Zane, and that’s something, because Anthony is clearly an established talent in the fantasy field while Amber Benson is a relative newcomer. 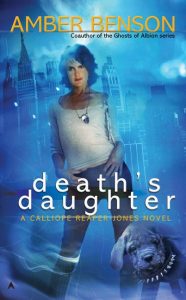 Death’s Daughter — well, one of them, anyway — is Calliope Reaper-Jones, the middle daughter in Death’s earthly family. Some years ago, she decided she wanted nothing to do with being part of the mechanism that is Death, Inc., and cast a spell of forgetting on herself. This has stuck her with a personal-assistant job in the home and garden sector somewhere in New York City. On the surface, Callie is facile, vacuous, image-obsessed, and able to name-drop pretty much any brand at will. This happens a lot in the novel, actually, and is kind of annoying. But I digress.

After a disastrous few days and a date that goes wrong, Callie shows up to work to find Jarvis, her father’s personal assistant. He’s also a faun. He undoes her spell of forgetting because Death himself has been kidnapped, as has Callie’s older sister Thalia, and Jarvis believes that Callie is the one person who can save him.

Thus begins an adventure which introduces Callie to such deities as Kali, Wodin, Indra, Vritra, the Devil, and several others. With three tasks to undertake to gain the power of Death — the only thing that will save her father and sister — Callie must overcome her problems with her past, her generally-whiny nature, and a weird sexual attraction to the Devil’s protege in order to find out just who kidnapped her family and why.

Benson’s writing style is very readable — breezy, quick, with dips into introspection that don’t take up an entire three or four pages (*cough*LaurellKHamilton*cough*). Though Callie is, as I said earlier, rather facile, it’s easy enough over time to ignore her name-drops and constant references to her clothing. I mean, she’s in her early 20s, lives in New York City, and has dreams of working in the fashion industry; it’s de rigeur, isn’t it, to do all those things? I don’t mind so much being in her head because her internal voice is pretty strong and often funny — I got kind of a Whedon-esque vibe off the voice, which is fine with me. That, combined with a Family-Guy-parody version of Gilmore Girls, a little Carrie Bradshaw, and a little Susan Sto Helit, makes up a character that I can get behind.

I also liked Callie’s insecurity — she is very much a “I’ll play along until you back me into a corner, and then I’ll come at you with my claws out” kind of person (which I can most definitely relate to on a personal level). She plays at being urbane and cosmopolitan, but underneath it all she just wants to be accepted and liked. Benson didn’t really harp on Callie’s appearance very much, either — which, in a fantasy novel, happens far too often, but then if the book is a first-person narrative from Callie’s POV, it would’ve been very contrived for her to look in a mirror just for the audience’s sake. I get the feeling that Callie is pretty but not beautiful, not terribly skinny but able to get there if she wants to*, and definitely has some hang-ups about sex. It does lead to some rather funny moments when she’s quasi-possessing the body of a Hindu deity, though.

As with similar fantasy novels, the other characters also play against type — especially Cerberus (who I can’t tell you about without spoiling a major plot point) and Kali, the Indian goddess of time, change, and possibly annihilation. In this novel Kali plays sort of a “sassy friend of color” role that readers might have seen in buddy-comedy films; she calls Callie “white girl” an awful lot, for starters, and I’ve read the synopses of future books in this series indicating that Kali returns. Hopefully not to start a “Death and Annihilation Detective Agency” or anything. I suppose I’ll find out.

The only major problem I had with the novel as a whole is that, for about 80 percent of it, things just happen to Callie and she reacts to them. It’s not until the climactic sequence that Callie really steps up and acts. I realize that this book was published in 2009, and back then you could get away with that sort of thing, but a lot has changed since then and I think readers (or, at least, readers like me) have grown tired of characters who just let things happen for most of the book. I know that Callie didn’t want to become Death, and that she never thought she’d be back in her family’s supernatural world, but it just got ridiculous after a while. I really would’ve appreciated Callie being a little less whiny and a little more “let’s just get this done so I can go home.”

Oh, and there’s the ultimate deus ex machina, which annoyed me a little, but not so much that I couldn’t get over it.

Spoilers (paste into rot13.com to read, but at your own risk):

I’m not going to go out on a limb and say that, with this book, Amber Benson firmly cemented herself into the world of fantasy fiction or anything, but I will say that she wrote a fairly-entertaining novel that read well and kept my attention throughout. Once you look past the fashion references, the Sex and the City-isms, and some of Callie’s internal struggles, you’ll find a decent entry into the “books about Death” continuum. I’d be willing to read the next Callie novel to find out what happens when certain things set up in Death’s Daughter are paid off. And, I suppose, that’s all any author really wants: to get people interested in continuing in her world as long as possible.

Just… here’s hoping she cuts down on the shoe references. I am so not a shoe person.

Note to Parents: This book contains violence, disturbing imagery, and adult language (since all the main characters but one are adults, that last bit makes sense, at least). There are several sexual references, but none of them are too explicit. Also, for some reason, young readers might think they can afford an apartment in New York City (even a very small one) on a personal assistant’s salary, which was a little hard to believe. I’d say any teen who could handle a hard PG-13 or soft R movie could handle this. However, you should use your own best judgment when it comes to your kids.

* There’s a line about how, if she wants, Callie can go to the gym and lose 12 pounds to fit into a size-zero dress. Not being a woman, I’m not quite sure how that works or what that translates into when she’s not 12 pounds down from her normal weight, so I’ve interpreted as best I can.