This review contains spoilers for Death’s Daughter by Amber Benson.

Following her enjoyable adventure through Hell with Calliope Reaper-Jones, Death’s middle daughter, I think it was pretty much understood that actress and author Amber Benson would return to her Death’s Daughter universe. She did so in 2010 with Cat’s Claw, a sequel that pretty much depends upon the main character making bad decisions for the story to succeed. Make no mistake, I still had fun reading the book, but there was an awful lot of narrative convenience in it. 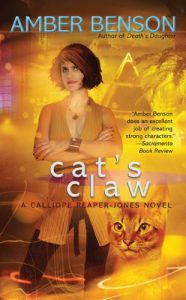 Benson, probably best known for her acting (Buffy the Vampire Slayer, plus guest spots on shows such as Private Practice), proved with Death’s Daughter that she can write a funny, fast-moving story with a main character who’s relatable even to people who are nothing like her. In the first book, Callie is drawn out of her New York City executive assistant job and back into the world of her father, who is Death. She’s tasked to discover who kidnapped her father and her older sister Thalia, and with the help of her father’s executive assistant Jarvis, a puppy, and several gods in the pantheon, she manages to find the culprit and bring her to justice.

Now, in Cat’s Claw, Callie finds that she needs to visit Cerberus, the three-headed dog who guards the North Gate of Hell (and who is the father of her puppy, Runt), because she owes him a favor. Cerberus gives her 24 hours to find a lost soul, Senenmut (he’s Egyptian), and that leads her to Bast, her father’s spirit guide and the Goddess of Cats. You may have heard of her. Along the way she discovers that Daniel, formerly the Devil’s protege and a man who she had a major crush on (before he died), is skulking around Death’s hall of records.

Before she can say “Prada” (Callie is something of a fashion bug, and by something I mean “extremely”), Death’s daughter finds herself back in Hell, covered in dog drool and other unsavory fluids, trying to rescue Senenmut. But once she does (that’s not really a spoiler), Senenmut requests her help in a quest of his own, one that drags Callie all over the world, from Las Vegas to Egypt, and as the two unlikely travelers grow closer (as friends), they discover that not all is kosher in the afterlife and that someone has plans for Death’s daughters.

It’s hard to talk about the narrative convenience thing I mentioned earlier without dropping big spoilers, but I’m sure you’ve read other books where the protagonist can take Route A and get straight to the goal, or take Route B and stop for a burger, and as she eats the burger aliens take over the restaurant and she has to fight them. If only she’d taken Route A. I kind of spent the entire book wondering why Callie just wouldn’t do the easy thing for once. Her character is established as someone who makes these kinds of mistakes, but one would think that after the events of the first book she might have, oh, learned her lesson.

Apparently that is not the case.

But I can handle narrative convenience. I use it myself at times. What did bother me about the book was the ending, and I can discuss that without spoiling it because the actual details are unimportant. My problem was that the entire climactic scene, including the monologuing that the villain does, feels far too much like a convoluted comics plot than something that would make sense to a bad guy.

Since Benson was on Buffy in Season 5, let’s go ahead and use that as our example. Glory, the Big Bad of the year, needed to find the Key and use it to return to her home dimension and/or unleash hell on earth. She spent much of the season trying to figure out who the key was, and the rest of it building her apparatus to get home. Her plan was very simple: obtain key, use key. But when the villain of Cat’s Claw explains everything that happened — along with interjections from Callie — I totally didn’t buy into it. I mean, how did Death himself not notice any of this happening? And then there’s a deus ex machina at the end which, while somewhat sensible, was clearly a deus ex machina. It felt like Benson had written herself into a corner and needed this to get out of it. That was disappointing.

Overall, I did get a good kick out of Cat’s Claw, but it wasn’t as good as Death’s Daughter. In other sequel reviews I’ve done, I’ve discussed my issues with direct sequels — specifically, that the wonder of them is often gone because I’m not learning about the world anymore. In this case, Benson gave us different scenery and other goals, but her use of narrative convenience and convoluted monologuing spoiled the end for me and overshadowed the snappy humor and the excellent pacing. I would recommend this book to people who liked Death’s Daughter because they’ll want to know what happened to Callie after that one ended, but I’m not sure if I would recommend it to anyone just picking up the series.

Note to Parents: This novel contains violence (some of it graphic), adult language, adult situations (including some semi-explicit almost-sex), and occasional rude humor. I would suggest this book be reserved for older teens, who I think would appreciate the sex scene in the spirit it’s intended. Of course, you should use your own best judgment when it comes to your children.