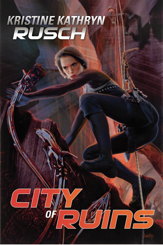 Science fiction always runs the risk of getting caught up in pointless details. City of Ruins by Kristine Kathryn Rusch is one of those science fiction novels that spends too much time looking down at its feet and not enough time staring up at the wondrous ideas that it is proposing. Half explore-the-ancient-machine, half first-contact, City of Ruins should not have been dull. Nevertheless, I found my attention drifting.

City of Ruins is the second book in the Diving Universe series, following Diving into the Wreck. It takes our nameless hero, Boss, to the oldest city on one of the oldest planets in the galaxy. Her daring crew of space-spelunkers have heard rumors about remnants of the lost and legendary “stealth tech” hidden beneath the city. Boss thinks the whole mission is a waste of time. Everyone knows that starships with stealth tech are found in space, and planets are full of icky things like dirt and other human beings.

It’s hard to worry about Boss, or her co-protagonist, Captain “Coop” Cooper. They’re both calm and rational people who always think things through, even when their emotions threaten to get the best of them. While it’s nice to have a pair of thoughtful protagonists, it sucks a lot of the drama out of the book. So long as she has all the necessary facts, Boss isn’t going to make mistakes. She’s too smart for that. The really interesting conflict comes at the end, when Boss and Coop are pitted against one another. That state of affairs only lasts for a few pages, but they were some of my favorite pages in the book.

I can’t write much about Coop without giving too much of the plot away. He brings more emotion to the story than Boss does, weighed down as he is by the decisions he has made and the people who rely on him. Unfortunately, it is sometimes hard to feel bad for a man who can ponder the unfairness of life over a plate of comfort food cooked by his personal chef.

The chapters in this book are short, sometimes only a few pages long. Each one ends with a cliffhanger. I found that the short chapters gave me plenty of jumping-off points, and after a while I was so inured to the cliffhangers that they couldn’t drag me back. Even with the deadly dangers of underground archeology and malfunctioning technology, very little actually happens. The protagonists bicker while the plot carefully excavates and diagrams every possible conflict between it and the end of the book.

Rusch takes a bit of a gamble with the points of view in City of Ruins. Coop tells his story from the traditional third-person past tense, but Boss’s sections are all in first-person present tense. The switch may distract some readers, but I found that it helped to draw a sharp line between the two stories. It also has a sort of symbolic relationship to the two characters’ situations.

City of Ruins is based on an award-winning novella originally published in Asimov’s Science Fiction. It will be followed by Boneyards. I did not get a chance to read either the preceding novellas or Diving the Wreck, so it is possible that City of Ruins is a stronger book when viewed in its proper context. I don’t plan to read the next book, and I hesitate to recommend this one. If you’re already a fan of the series, or if you’re looking for a space opera that takes place in a claustrophobic underground setting, this book might be for you.

I could’ve followed the sounds. The closer I get, the louder voices grow—yelling obscenities, cheering, clapping in approval.

I used to let them do it too, without interference, until the repair bills got too much. Then the House shrink told me about the added toll of repeated trauma—the fights would often replicate something that happened Out There—and I realized that no matter how much steam got blown off, the fights weren’t worth the expense.

Still, I wished for those old days sometimes.

Sparks in a Cold War

“We’re all committing a crime,” Audra said, leaning back and closing her eyes. “That’s part of what we’re paying you for.”

Technically, she was right. Extreme Safaris took their clients to unsanctioned or dangerous worlds, trips which could result in serious fines or, in Bryer’s case, the loss of his ship’s clearance for those areas. So far, Bryer had managed to avoid the fines simply by having his clients sign a document that said they had insisted on a trip to the unsanctioned area. He had never had his clearance removed, but he figured it wouldn’t be a serious problem. He could always charter another ship.

“You shot a sentient being,” he said. “You didn’t pay for that right.”

“Oh?” She tilted her head toward him. “Is there a higher fee for that?”

Her parents thought the testing was mistake number one. It certainly was expensive enough, but the doctor said he advised it for any couple about to get married. If they’re genetically incompatible, he’d said, they have the choice of terminating the relationship, planning for an expensive future, or tying tubes — practicing irreversible infertility, as one of her friends called it.

Options. That’s what her parents don’t get. It’s all about options.