While I certainly didn’t plan on an alien encounter, my life had been in such a downward spiral that I had gotten used to expecting the unexpected.

Cheryl, my wife, and Ryan, my friend and boss, had been spending some extra time together without me – nights mostly. I handled this by 1) punching Ryan in the mouth, twice, then 2) spending the rest of the day drinking lunch, and 3) picking up dinner at the liquor store. On the way home, my car expired on the freeway, by spewing steam and smoke then finally bursting into flames. I did, however, manage to rescue my bottle of dinner vodka before its fiery demise, but somehow forgot my personal laptop was in the back seat. I eventually reached home only to find Cheryl had gone. Judging by the amount of stuff she had taken with her, it was for good.

I surveyed what little remained in the house. In the living room there was carpeting with clean spots where the furniture had been, and a TV stand with no TV. In the kitchen I was left with one red plastic cup, an unopened box of flexible drinking straws, and a bag of pretzels. In the bedroom I saw a bed frame with no mattress or sheets, wire hangers, and a torn Sports Illustrated. I grabbed the pretzels from the kitchen and made my way out onto the patio to get away from the heavy absence of my material items. I was considering which lawn chair I might sleep in, when I noticed a little green creature standing in my back yard. It took a while for my senses to come into agreement; I was looking at Fonzie. Yes, Fonzie, the character played by Henry Winkler on Happy Days.

He didn’t look at all like Fonzie in the face, or even his body type. In that regard he was as stereotypically expected: green, about four feet tall, three long fingers on each hand, comically big eyes, with no nose to speak of, and a very tiny mouth. It was the leather jacket, pinch rolled jeans and perfectly greased jet black hair that gave the general appearance of the Fonz.

The creature leaned coolly against my fence, holding one finger of each hand in the air. I assumed those were the closest thing he had to thumbs.

END_OF_DOCUMENT_TOKEN_TO_BE_REPLACED

The block’s turning into a rough neighborhood, the kind of place murder victims go to hang out.  It’s nasty and dirty but it’s home.  What’s got me pissed isn’t a little trash, it’s these stupid glasses everyone’s wearing.  Government wastes money on them instead of doing their goddamn jobs, drives me nuts.  The worst part: that dumb smile.  You know the one.  Bunch of fakers, walking around smiling at all the filth like it’s high art.

“Hey man, forget your specs?”  Crap, a cornerboy snuck up on me because I wasn’t paying attention.  He holds out a set.  “Free pair.”

“I don’t want ’em.  My taxes should go to REAL cleanup and maintenance, not…  those.”  I stop, point.  “They’re insulting, I’m not interested in fantasy.”  I walk again, faster.  The boy keeps pace, switching to that infuriating ‘reasonable tone’ parents use when they’re trying to con kids out of being monsters.  I don’t NEED to be handled, I just want him gone.

“Look guy…. if you don’t take these, someone’ll try again later, then again after that.  Might as well get it over with.”  He brightens.  “Hey, you can just turn off the overlay if you want, you know.”

“Sure, you can turn off any enhancement.  Click your tongue twi-”

“Yeah, I’m not a caveman.”  I grab the set.  “Ok, you win.  Go bug someone else.”  I scowl at the glasses as he leaves to find his next mark, then put ’em on.  Everything around me changes.

I ignore the pretty lies and start configuring.  I know if I don’t, the slums’ll look like new construction, the garbage in the street’ll be gone, and everyone’ll have the bodies of freakin’ supermodels.  After a minute, I’ve got honest, dingy reality back.  I’ll take true filth over fake clean anyday, but… everyone still has that dumb smile. I want to scream “It’s not real!  It’s a lie, they’re faking you out and you’re buying it!”  I want to, but they say I sound like a crazy person when I drop hard truths so sometimes I don’t.

They don’t care.  They get their shiny buildings and pretty people and nobody has to DO anything for it.

Well, at least the cornerboys’ll stop hassling me.  I squint, it’s bright out.  Re-open the editor, make ’em sunglasses.  Not bad.  For funsies, I flip one of those idiot mouths upside down.  Oh, this is rich, the simp looks so messed up.  I flip a setting so everyone’s like that.  That’s better, now I don’t have to look at the grins anymore.

Fine.  They can have their illusions, I’ll stay in the real world.  I know the score, I’ve got my integrity.

I keep walking, the last honest man in a world of lies, and I smile.

END_OF_DOCUMENT_TOKEN_TO_BE_REPLACED 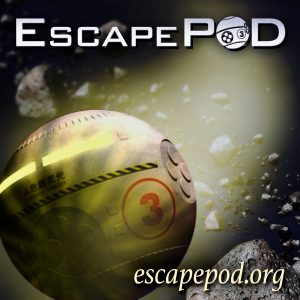 We wanted to give you a quick update of the goings-on at Escape Pod. It’s the first of what we expect to be many positive developments in 2016, so hold onto your socks!