The block’s turning into a rough neighborhood, the kind of place murder victims go to hang out.  It’s nasty and dirty but it’s home.  What’s got me pissed isn’t a little trash, it’s these stupid glasses everyone’s wearing.  Government wastes money on them instead of doing their goddamn jobs, drives me nuts.  The worst part: that dumb smile.  You know the one.  Bunch of fakers, walking around smiling at all the filth like it’s high art.

“Hey man, forget your specs?”  Crap, a cornerboy snuck up on me because I wasn’t paying attention.  He holds out a set.  “Free pair.”

“I don’t want ’em.  My taxes should go to REAL cleanup and maintenance, not…  those.”  I stop, point.  “They’re insulting, I’m not interested in fantasy.”  I walk again, faster.  The boy keeps pace, switching to that infuriating ‘reasonable tone’ parents use when they’re trying to con kids out of being monsters.  I don’t NEED to be handled, I just want him gone.

“Look guy…. if you don’t take these, someone’ll try again later, then again after that.  Might as well get it over with.”  He brightens.  “Hey, you can just turn off the overlay if you want, you know.”

“Sure, you can turn off any enhancement.  Click your tongue twi-”

“Yeah, I’m not a caveman.”  I grab the set.  “Ok, you win.  Go bug someone else.”  I scowl at the glasses as he leaves to find his next mark, then put ’em on.  Everything around me changes.

I ignore the pretty lies and start configuring.  I know if I don’t, the slums’ll look like new construction, the garbage in the street’ll be gone, and everyone’ll have the bodies of freakin’ supermodels.  After a minute, I’ve got honest, dingy reality back.  I’ll take true filth over fake clean anyday, but… everyone still has that dumb smile. I want to scream “It’s not real!  It’s a lie, they’re faking you out and you’re buying it!”  I want to, but they say I sound like a crazy person when I drop hard truths so sometimes I don’t.

They don’t care.  They get their shiny buildings and pretty people and nobody has to DO anything for it.

Well, at least the cornerboys’ll stop hassling me.  I squint, it’s bright out.  Re-open the editor, make ’em sunglasses.  Not bad.  For funsies, I flip one of those idiot mouths upside down.  Oh, this is rich, the simp looks so messed up.  I flip a setting so everyone’s like that.  That’s better, now I don’t have to look at the grins anymore.

Fine.  They can have their illusions, I’ll stay in the real world.  I know the score, I’ve got my integrity.

I keep walking, the last honest man in a world of lies, and I smile.

Shopping for the Perfect Battle Mount

“I heard you had Giant Mutated Sloths for sale,” the General of the Allied Intergalactic Army said without preamble as he entered the Battle Mount Store.

“We do indeed,” the merchant replied with a smile.

The merchant was used to working with no-nonsense military officials, who else was shopping for animals to ride into battle? Animals that were deadly, loyal, and would inspire artists to paint their likeness on the side of vans.

They walked to a pen filled with a dozen sloths, each at least nine feet tall and hanging upside-down from huge tree branches.

“They are fire-proof and bullet-proof,” the merchant said. “And with those claws they can do some real damage. But trust me, you don’t want them.”

“Are they too lazy?” the General asked. “Fall asleep in the middle of a fight or take a day to cross a field?”

“That’s just a myth. They can move faster than 2X31 airships. No, the problem is their cuteness.”

They looked at the sloth’s furry face that seemed to be sleepily smiling.

“They’re too cute,” the merchant said. “They look like happiness wrapped in sunshine and you’ll never want to put them in danger so you’ll never use them in battle.”

The merchant declined to mention that their adorableness could even influence a capitalist’s heart and now the sloths were only for sale for people who wanted to snuggle with them during naptime.

“Fair point,” the General said. “What do you suggest?”

They walked to the next holding pen. A creature with claws and reptilian legs towered over the humans. It was also covered in feathers.

“You want me to ride a chicken into battle?” the General asked.

The creature picked that moment to start flapping its wings and clucking.

“What’s next?” the General asked.

“Have you considered Flying Enhanced Sharks?”

“I said they were enhanced.”

“I don’t think I would look dignified.”

In the next pen there was a tiger sleeping in a sunbeam. The merchant picked up a laser pointer. “Should I show you her hunting skills?”

“They’ll never go out of style. Ginger here will go with any contract-holder as long as they worship her and provide food. Word of warning: never try to pet her belly.”

Running out of animals the merchant desperately asked, “Have you considered a horse?”

“Talk about a classic.”

The General mused for a minute then asked, “Do they come in purple?”

With contract in hand the General left just as the Admiral for the Devouring Darkness entered.

The merchant hurried over to greet the new customer. Maybe this time the chicken would finally be ridden into battle.

My mother asks if we want gingerbread again—third time in a row, disc stutter. “It just came out of the oven!” she says, and her wrinkled face is a great smile framed by hair like tundra grass.

The aunts and uncles glance over, fears of senility in their puzzled eyes. My brother lowers his martini, and I wonder how many this is for him. Five? Six? He’s been pounding them ever since he arrived; his eyes dart anxiously over the holiday gathering and zero in on Mom’s strange antics.

“Mom!” I say, steering her by the arm into the kitchen pantry.

“I have gingerbread! It just came out of the oven!” she tells me.

In the small pantry surrounded by bags of flour, smelling of spices and old mops, I log out and face the computer screen.

The party is gone, fading from my eyes like the afterimage of a firecracker. My den is unlit and very cold; my hands are almost blue, the digits stiff. I eject the disc from the multidrive and examine it by the silvery moonlight leaking in through a cracked window stuffed with newspapers. The disc is cold to the touch, and a pencil-thin scratch interrupts its rainbow circle of gold nanorods.

I blow against the disc, and a mote of dust leaps off its circular edge and soars through the chilly air towards the dead fireplace.

I place head-rig back around my shaven scalp, snap the lens back over my eyes, and hit PLAY.

The pantry leaps back to my eyes, and Mom is brushing past me to leave the pantry. The door swings like that of a saloon. I follow her out and my brother is standing there, waiting for me.

“When did she die?” he demands.

I shiver from the cold of my den and the accusation in his eyes.

“Two months ago,” I say quickly, rubbing my freezing hands. “Josh, you were away. I’m sorry.”

My brother’s gaze flicks away, back to the living room where the aunts and uncles and cousins sit around, pow-wow style, to play a group game of some kind. “I think you need therapy.”

“You paid for a digital copy of Mom to be made? You inserted it into our virtu-meet? That’s sick!”

I shiver in place. “I only wanted—”

“I know we haven’t spoken in a long time, but do you think you could have told me that our mother died? Were you ever going to tell me?”

From the living room, Mom’s voice rises above the pleasant music and mild conversation:

My brother looks at me. “How many of us are dead?”

Laura Davy is a speculative fiction author who is obsessed with cats. She started writing as a naive seven-year-old who wrote a few chapters of a novel that basically plagiarized the Sweet Valley Twins books, but learned it was a lot more fun to come up with own plots, characters, and even worlds. Now she writes everything from epic fantasy to light satire to bloody horror. She is a Viable Paradise 19 graduate and she’s currently working on short stories as well as a fantasy novel. When she’s not writing she’s chasing her cat around her home and singing about kitty escapades. 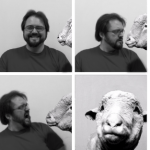 Ben Hallert lives in Oregon with his wife, two children, a plane, and a reach that regularly exceeds his grasp. 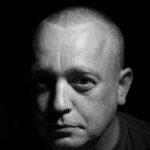 Nicholas Camm is a British actor, audio-book narrator and voice overer. He is just about to begin recording the 7th book in the Eddie Malloy Mystery series, a set of thrillers set in the world of horse racing. He has acted with, in his humble opinion, some notable luminaries, including Derek Jacobi, Ray Winstone and ex Doctor Who, Matt Smith, and has apparently been on the big screen in Times Square, although he wasn’t there to see it. He was recently a holographic mad professor in an experimental theatre piece, and has just finished filming an advert with a famous German footballer (that’ll be soccer for you Yanks!). Nick still ranks the time when Peter Watts emailed him to say, “You f*#~king nailed it”, about his narration of Pete’s story ‘Malak’ for StarShipSofa, as one of his giddiest moments. One day Nick will stop procrastinating and write a sci-fi novel. Until then there’s hoovering to be done. 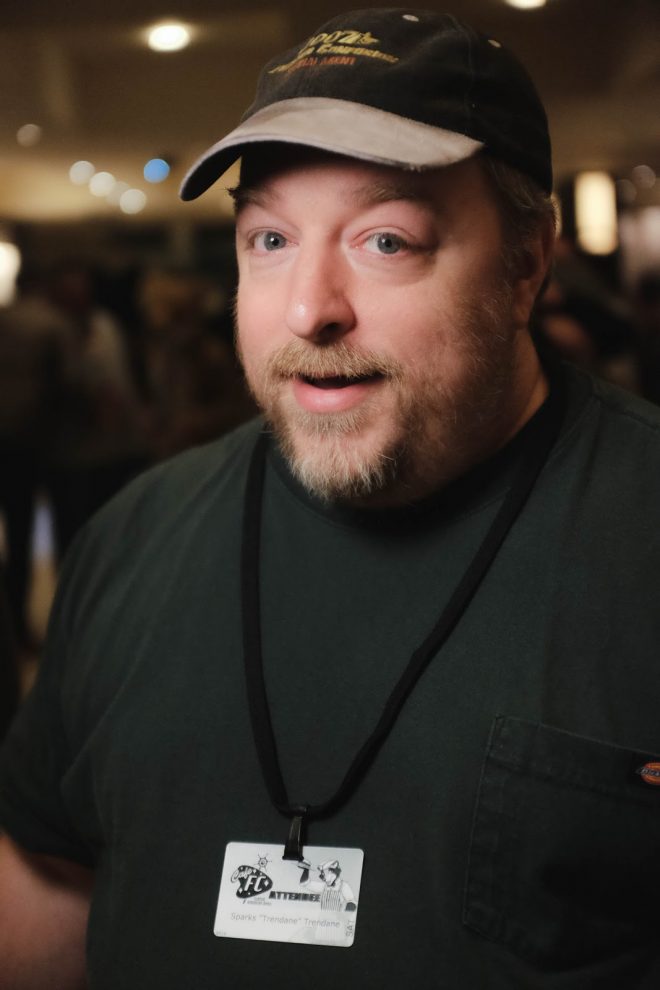 As a mascot performer, one is often seen and not heard. As a voice actor, one is often heard and not seen. At some point, the universe will balance out. Living in the San Francisco Bay Area, Tren usually records at night when things are the most quiet and edits during the day. You can imagine what that does to one’s sleep schedule! But, BattleTech and Shadowrun audiobooks aren’t going to narrate themselves…yet. 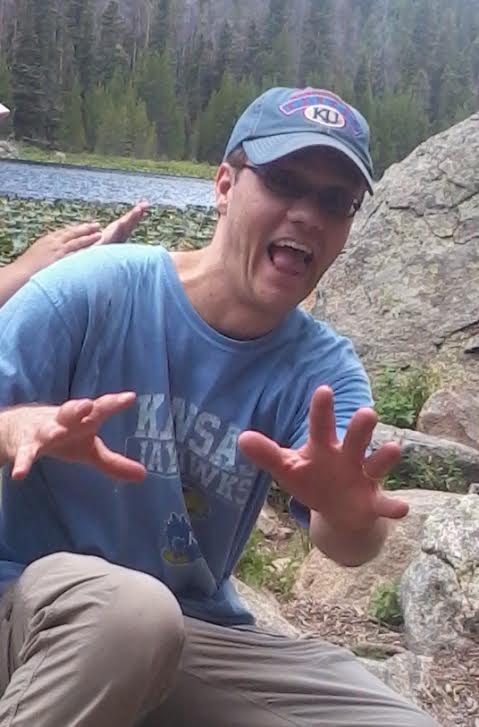 Adam Pracht lives in Kansas, but asks that you not hold that against him.

His full-time day job is as Marketing and Volume Purchasing Program Coordinator for Smoky Hill Education Service Center in Salina, continuing his career of putting his talents to work in support of education.

He was the 2002 college recipient of the Robert F. Kennedy award for writing about the disadvantaged and has published a disappointingly slim volume of short stories called “Frame Story: Seven Stories of Sci-Fi & Fantasy, Horror & Humor” which is available from Amazon as an e-Book or in paperback. He’s been working on his second volume – “Schrödinger’s Zombie: Seven Weird and Wonderful Tales of the Undead” – since 2012 and successfully finished the first story. He hopes to complete it before he’s cremated and takes up permanent residence in an urn.

You can also hear his narration and audio production work on two mediocre Audible audiobooks, and as a regular producer and occasional narrator for The Drabblecast.