Sparg had difficulty making pancakes, but he was trying.

In the empty apartment, he clutched the silver bowl with one tentacle to hold it steady. With another, he attempted the far trickier business of whipping the batter as he’d seen his owners do many, many times. The bowl was bigger than him. The counter was sticky with flour, egg, and ink.

From his cage, he had watched them conduct this peculiar ritual enough times to understand it was how they prepared their food. More elaborate than the brown fish-pellets they gave him. When his food dish was empty, they usually noticed as they shuffled in from the bedroom each morning. If they didn’t, Sparg would gently thump his tentacles against the bars until they came over to see what was the bother. Then strange sounds would issue from their red mouths:

“Sparg’s food dish is empty. Can you get the bag?”

And Sparg would thump his tentacles merrily, knowing that food was coming and that his owners would likely pet him when they refilled his dish, and he liked that. Sometimes he gently wrapped his tentacles around their hands as they did, and he would squeeze his eyes shut and enjoy their warmth and smell and reassuring touch.

The pancake batter reeked. Atop the kitchen counter, Sparg gave the mixture another few stirs. Then he flung the whisk into the kitchen sink, taking small delight in watching the tool float through the air and clatter into the shiny basin.

His owners never had trouble moving the pancake batter from the counter to the stove. That was because they were tall, magnificent beings, striding from room to room on graceful legs. Sparg gripped the bowl with three tentacles and held it aloft as he crawled down the counter, leaving little sucker prints in the dust.

He was not allowed on the kitchen counter or stove. This was a rule he understood. His owners flew into frightful antics when they saw him there. In the beginning, they react mildly enough: lifting him off the counter and returning him to the floor, petting him and issuing stern words. One day, the deepvoiced owner was drinking coffee at the counter when Sparg crawled up to sit near him. Deepvoice yelled and slapped him off, sending him into a low-gravity spin across the room. Sparg had been shocked by the assault, but then he heard Deepvoice laughing and he realized this must be some sort of game.

He returned to the counter at once, to take part in the amusement. When Deepvoice slapped him off a second time, the blow was more painful.

“What are you doing?” asked the high-voiced owner.

“Stupid thing. This is why we should have gotten a dog.”

“Dogs and cats don’t adjust to the gravity here. Don’t hit it again!”

“It keeps coming back here! I thought they were supposed to be smart!”

Highvoice intercepted Sparg as he was limping towards the counter a third time, and she put him in Littlevoice’s bedroom. The pain set in when he was alone. Sparg didn’t like being alone. He resolved to never go to the counter again.

He reached the floor successfully, the pancake batter wobbling in his desperate grip. The floor glistened from past spills. Sparg scuttled to the stove and began the challenging ascent. The batter sloshed around in the silver bowl as he pulled himself up, one careful inch at a time. At last, he flopped onto the stovetop, fumbled amid pots and pans, dials and spatulas. Then he paused, trying to remember the rest of morning ritual.

Owners awoke and refilled his food dish. Owners went to the kitchen and made breakfast – usually pancakes. Owners…

Sparg pulled himself up the stove, crawled across its reflective surface, and stared up at the overhanging cabinets.

It was time to make Littlevoice’s school lunch.

Each morning, the smallest member of the human trio would receive a brown paper bag filled with fruit, crackers, a juicebox, and sandwich. Sparg tapped the stovetop anxiously, considering the problem’s magnitude.

Crackers were still plentiful in the apartment, and there were still several juiceboxes in the fridge. He had no trouble constructing a sandwich, and rather enjoyed prying the peanut butter can open, wielding a butter knife to spread its creamy contents onto two slices of bread, then wrapping the sandwich carefully to lower like a gift into the paper bag. The problem was the fruit. It didn’t look like fruit anymore. Sparg didn’t know what had happened. The bananas and apples and pears had changed into a putrid brown jelly, fuzzy and gray with moss. They smelled terrible, too.

More carefully than he had handled the eggs, Sparg eased a sagging, lopsided pear from the bowl and – hardly daring to breathe – he gingerly set it into the bottom of the paper bag. Then, breathing again, he scuttled down the stove with the bag in tow to deposit by the apartment door. He hesitated there, thumping all his suckered limbs, trying to think.

“Come on everyone! Breakfast!”

Breakfast! Sparg hopped up and down, recalling the clink and clatter of plates. He moved steadily along the floor, grabbed a smooth table leg, and ascended onto the kitchen table. The plates, glasses, and silverware were exactly as he had set them weeks ago. Still, Sparg squinted carefully at each place-setting. Sometimes things became askew as he went about his day; he might nudge a glass out of place by accident, disrupting the careful symmetry that was obviously a part of the very important morning arrangements. Satisfied, he threw himself to the floor, drifting in the low-gravity and remembering old amusements.

He went to the wallscreen. This too was part of the ritual. Deepvoice was typically the first one to awaken each morning, and after coffee he –

Filter, water, coffee, pot, mug! Sparg worked feverishly, swelling with pride that he had figured out the strange contraption. It had never been visible from his cage, and all he knew of its presence was the unpleasant hissing, popping, and trickling noises it exuded. Once the coffee was bubbling with those familiar sounds, Sparg leapt back into the low gravity and pressed the wallscreen to life.

“–second squadrons attempted to break the blockade. The North American continent has… firing of the defense satellite… in retaliation to the… will seek peaceful resolution if…”

The screen warbled and froze.

Sparg felt small as he sat on the rug before the wall of pixelating images. He didn’t understand the bright wheeling colors and disembodied heads. But he cast a hopeful glance towards the front door.

Then he saw the football. His color flushed to a dark cobalt.

He used to fight with it, wrapping his tentacles over its toughened skin and trying to crush it. When that failed, he industriously worked to pry it apart at the laces. He wasn’t sure how the animosity had begun. It might have been that it reminded him of himself in a curious way: both the same size and similar color. Or perhaps it was the way Deepvoice would cradle and hold it as he watched the wallscreen. When Sparg was alone, he would often stare at the football through his cage bars and seethe.

He stalked the football now. It was nestled against the couch, unaware of him. Sparg flattened his body into a pancake of his own, approaching in an oblique line of predatory flanking…

The air smelled of smoke.

In truth, something had been wrong for a long time. Sparg had known it the moment his three owners rushed into the kitchen one morning, bags in their arms.

“The last of the shuttles takes off in two hours! Now hurry!”

“Daddy! Why are we leaving!”

“I told you! Everyone’s leaving! We have to get to the shuttleport while it still has transports!” Deepvoice sounded worried. That never happened, and it made Sparg worry.

Something was very wrong.

A pause. Sparg understood the sound of his name. He thumped the cage bars anxiously.

Deepvoice approached the cage. He peered at Sparg for perhaps half a minute. Then he unlatched the lock.

“But he’ll die without us!”

“Goddamn it, it’s just a stupid animal!” A hesitation. “Leave the bag of food open.”

“Will we be coming back, Daddy?”

Another pause, longer and graver than the last. “Yes. It’s only a war, and all wars end. We’ll be back and then you can be with Sparg again.”

And then they were rushing towards the apartment door. Sparg fled his cage and scampered after their heels, but they quickly passed through the doorway into the mysterious corridor beyond, and then the door slammed in his face.

And hadn’t opened since.

Something was wrong. Sparg smelled the pancakes burning.

Smoke gushed from the stovetop and slithered over the ceiling with black fingers. Sparg’s panic exploded, and he left a trail of ink as he pushed off for the stove. He was halfway into his climb when the overhead alarm went off.

This had happened once before. Highvoice had been cooking and had received a phone call. She was in the other room while the food burned, and then suddenly the alarm lights flashed and water poured out of the ceiling.

Sparg had liked the water. Liked the feel of it on his skin. While Highvoice shrieked and waved her arms to dispel the smoke, Sparg had splashed merrily around the kitchen floor.

But now, the water brought no joy. Sparg reached the stovetop, wrenched the pan from the red burner, and wielded the spatula to flip the reeking, charred mess. The sprinklers drenched the kitchen, leaving greasy puddles everywhere, dripping down the stove and cabinets and tables and chairs. The lights flashed for a while, and then went dead.

Sparg sat atop the kitchen table with the blackened pancakes in each plate. He barely moved. The smoke had given the apartment a greasy patina and now he waited, glancing dubiously at his only other companion: the football, strapped into the old highchair, with a plate of burnt pancake and a cup of juice.

Then he heard the voices in the corridor.

Sparg shivered in anticipation too great to be constrained. He gave the table one last, hasty inspection. Then he leapt off, spinning, all tentacles extended in joy. He hit the wet floor and slid, scrabbling madly towards the door, and waited.

From the corridor came the muted voice:

And then the door opened in his imagination.

His owners rushed in. Deepvoice and Highvoice and Littlevoice had returned! They saw the table and the food and they grinned. They saw little Sparg waiting for them, and they reached down to pet him, and he wrapped his tentacles around their hands in happiness…

But the fantasy faded. The door remained an immovable, vertical slab.

When evening fell, he kept vigil as long as he could. At last he curled up against the door. When he awoke, he crept through the house to see if they had returned while he slept, and when he saw the empty rooms he stared for many minutes, trying to understand what he had done wrong.

Slowly, feeling his loneliness harden into renewed determination, he returned to the counter and began again. 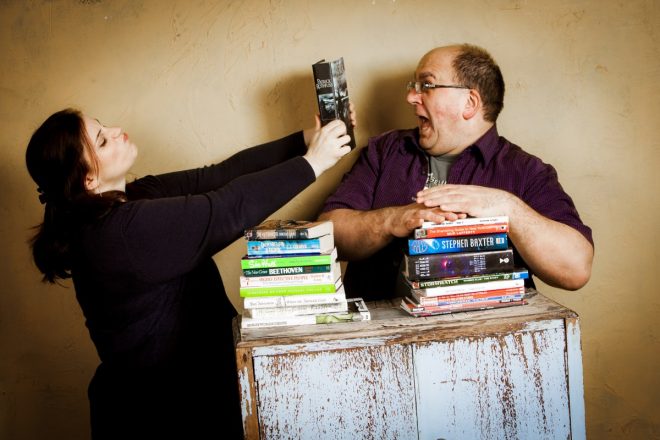 Alasdair Stuart was briefly employed as a circus geek until an unfortunate mix-up involving a prize-winning fighting cock. Its owner had ties not only to the carnival, but also to the Russian mob, so now he writes supplements for role playing games, where he exercises his superpower to make you appreciate the Sixth Doctor. He has played for the national rugby team after defeating the monstrous four-horned sheep across his home island. He is the Supreme Mugwump, Keeper of the Big Red Button, a regular contributor to Tor.com, and he owns a bunch of awesome podcasts.