The following review contains spoilers for Kick-Ass. It also contains adult language, due to the name of one of the characters. Reader discretion is advised.

In my reviews of movies here on the site, one thing I always try to mention is the film’s soundtrack. Much as some people writing about Firefly say that the ship is a character, so too is the music in any TV show or film. And sometimes movies that get little or no play can have great soundtracks.

Kick-Ass 2 is one such film.

Last week, I decided to try out my new HBOGO subscription by watching a film I’d meant to see back when it was in theaters. See, I love a good superhero movie, and while the original wasn’t the best superhero movie I’d ever seen, it still had a lot to recommend it: humor, likable (and dislikable) characters, action, violence, and one hell of a great score. In fact, to this day the “Flying Home” music from the original Kick-Ass is my ringtone, having replaced “Enterprising Young Men” from Star Trek (2009).

So when I saw that the sequel was available as part of my subscription, I figured I might as well kill a couple of hours watching it.

At the end of Kick-Ass, Dave (Aaron Taylor-Johnson) and Mindy (Chloe Grace Moretz) had defeated the main bad guy, leaving his son Chris (Christopher Mintz-Plasse) to drop his mantle of Red Mist and become the Motherfucker. The film opens on Mindy cutting class to continue her training and also working with Dave to strengthen him. Dave suggests that Hit-Girl (Mindy’s alter-ego) join up with Kick-Ass (Dave’s alter-ego) in the style of Batman and Robin — and, amusingly, Dave suggests that he is Robin. (Amusingly to the audience; we all know that Mindy is a much better superhero than Dave.)

But Mindy’s new guardian, Marcus (Morris Chestnut, playing Marcus, Mindy’s late father’s partner on the police force before her father became superhero Big Daddy), just wants Mindy to become a normal teenage girl and even gets her in with the popular girls. Dave, meanwhile, takes up the mantle of Kick-Ass once more and meets Dr. Gravity (Donald Faison), who gets Dave into Justice Forever:

The film gives a nice nod to actual real-life superheroes, such as Phoenix Jones, who spend a lot of time helping the homeless and doing other types of community service, but Justice Forever eventually takes on an actual criminal mastermind, Jimmy Kim, who imports underage girls and turns them into prostitutes. That night, while team members Remembering Tommy are off seeing Book of Mormon, Justice Forever lays the smack-down on Kim and his men.

And that’s when the Motherfucker and his gang* go on the rampage. Joined by Mother Russia (Olga Kurkulina), Black Death (Daniel Kaluuya), The Tumor (Andy Nyman), and Genghis Carnage (Tom Wu), the Motherfucker puts Night Bitch in the hospital, takes out eight police officers, and hatches a plan to destroy the city… and kill Kick-Ass.

Kick-Ass 2 is by far more violent and ridiculous than the first movie. It definitely hits the comic-book angle hard, and Jeff Wadlow’s direction (he also wrote the screenplay, basing it on the comic-book series by Mark Millar and John Romita Jr.) includes a lot of comic-book bits that are simply too difficult to believe. In the original film, it was vaguely believable that Big Daddy and Hit-Girl could be superheroes in the real world, but in this movie the sheer amount of violence perpetrated by normal people, as well as the acrobatics in the post-funeral car chase scene, require a much greater suspension of disbelief. That aside, I found the direction and editing pretty sharp, and if there was more blood, barf, and poop than humanly possible, at least it was done well.

But the real reason I wanted to write this review was because of the soundtrack. Composed by Henry Jackman and Matthew Margeson, this film absolutely builds on the Kick-Ass theme from the previous movie’s soundtrack (composed by Jackman, Marius De Vries, John Murphy, and Stardust‘s Ilan Eshkeri), adding substantial cues for Hit-Girl and the Motherfucker, as well as becoming another character in the film. It’s almost impossible not to notice the musical themes woven through this film, which Jackman and Margeson do almost as well as Patrick Doyle did in Harry Potter and the Goblet of Fire. It’s rare that I actually stop a movie to buy a soundtrack, but I did it with Stardust and I did it with Kick-Ass 2. It’s that good.

I do need to bring up one scene in the film that may trigger some individuals, although going into an ultra-violent movie about real-life superheroes and supervillains comes with its own set of warnings. In the sequence when Night Bitch is menaced by the Motherfucker and the Tumor, it’s with the intent for the Motherfucker to rape her. However, he is unable to get it up and the scene is played for laughs before the Motherfucker orders the Tumor to “hurt her. Badly.” In the comic, if I’m remembering correctly, the Motherfucker actually is able to go through with his intended attack. This scene may affect some viewers more strongly than others. 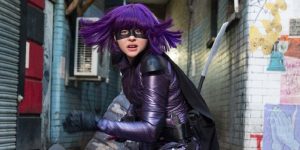 I also want to mention the work done by the editor and writer/director in the melee scene at the end — all the named characters get a chance to kick ass, and the battle between Hit-Girl and Mother Russia is truly brutal and bleak — think Ivan Drago against Apollo, although without the same ending to that fight. And, finally, I want to make note of the fact that all of these characters do get hurt — Kick-Ass, Hit-Girl, and the Motherfucker, especially. You see the effect of their injuries, and you see them healing. It’s one thing that really endeared me to the first film, and it’s nice that it’s maintained in the second.

Look, let’s be honest here: Kick-Ass 2 is not high art. It’s not going to make cinema history. But it’s an enjoyable movie (with some corners cut, plot-wise) and it has a good ending, and the soundtrack is phenomenal, no two ways about it. If you saw the first one, you’ll want to see this one as well — as I said, it’s on HBOGO and you can also get it on Amazon.

* I would be remiss if I didn’t mention John Leguizamo’s appearance in this film as Chris’s butler/bodyguard/friend Javier, who — spoiler alert — is killed unexpectedly. At least, I didn’t expect it to happen when it did.