This is the fifth article in a ten-part retrospective of the Harry Potter soundtracks. You may wish to refer to the previous entries in the series for more information.

After John Williams’s work on the first three Harry Potter films, who would the studio get to step up and take on the mantle of the fourth, and longest, and biggest-in-scope: Harry Potter and the Goblet of Fire?

Well, I for one had never heard of Patrick Doyle — though apparently he had done films I’d seen, including Dead Again, Exit to Eden, and Gosford Park. Most recently, he’s scored Kenneth Brannagh’s Thor and the new Rise of the Planet of the Apes. Apparently the guy had the chops to be considered.

And he pulled off what I think is the best of the eight Potter soundtracks. 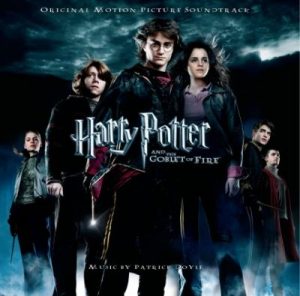 From the very beginning — “The Story Continues” — we’re told that this film is going to be darker and scarier than any of the others, despite what we know to be several action sequences and Harry’s first foray into romance. Astute listeners who are also fans of Family Guy will hear that the main “sinister” theme of the film sounds a lot like the phrase in the show opening that goes “lucky there’s a Fam-i-ly Guy…” It’s also heard again very prominently in horn form in “The Dark Mark”, which incorporates it along with some cues that sound very similar to ones heard in Star Trek: Nemesis.

I’m going to go ahead and call it the “Family Guy” theme from here on out.

“Rita Skeeter” kind of harkened back to the John Williams days in its leading-you-by-the-nose orchestration of “yes, this character is mean, but she’s also the comic relief, and she’s not really evil”, which to me made it a weaker track. “Sirius Fire” went a bit too heavy on the mood music, especially with the violins around 1:30. But the compositions themselves are good. And, for a 9:40 cut that’s supposed to underscore the graveyard fight with the Final Boss, “Voldemort” comes off pretty uninspired for the first few minutes — it fits with the theme and mood of the rest of the soundtrack, but coming right on the heels of “The Maze”, it was almost like there was too much mood, as if Doyle was trying to hammer into your head that “HOLY CRAP VOLDEMORT!!!!!!!!!!!!!” was about to occur. (At 4:20, there’s a nice musical phrase that I enjoyed based off the “Family Guy” theme, but by far the best part is about 8:00 in, when Priori Incantatem occurs and we hit the sad-triumphant theme which I found to be really well-done.)

Doyle’s strength with this soundtrack was to create a series of cues and themes — the “Family Guy” theme, the music and mood he used for the Voldemort sequences, the waltzes and love themes — that feels, for the first time, like a complete piece of art. He also “teases” upcoming tracks, such as the shift from “Harry Sees Dragons” to “Golden Egg”, which I find to be a really cool technique — basically priming you to hear more of what you just heard without thinking “oh, hey, here’s a new gigantic bombastic piece of music you’re totally unprepared for”. It happens again with “Neville’s Waltz” and the repeated themes from it heard in “Harry Potter’s Love” — a wonderful love theme and one that I occasionally find myself humming when I’m not paying attention. And then they both come together for “Potter Waltz”.

Though there are a few songs peppered in here and there that I personally didn’t care for, for the first time in the series, we’ve got a start-to-finish soundtrack that I can sit back and enjoy without occasionally asking myself what just happened. I was extremely disappointed that Doyle wasn’t brought back to score more of the films, but I’ve yet to be disappointed by any of his work, and this soundtrack is part of what makes Harry Potter and the Goblet of Fire such a great film.

In addition to the orchestrated part of the soundtrack, a band was created to perform three songs under the name “Weird Sisters”. It featured members of Pulp, Radiohead, All Seeing I, and Add N to (X), and was fronted by Jarvis Cocker. The three songs they performed, including the one that ran during the credits, are at the end of the soundtrack. I’m not going to review them, except to say… they’re okay. Nothing good or bad to say about any of them.