In this age of smartphones, tablets, personal electronic devices, and connected TV, it’s nice to see children reading a book or two every now and then. Maybe the book is on an electronic device, but at least it’s a book, right?

My daughter is six. She’s very bright. I determined that she was old enough for me to read her one of my very favorite books growing up, The Phantom Tollbooth by Norton Juster. We finally finished it last week. 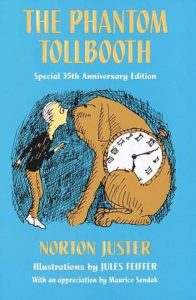 The Phantom Tollbooth is a children’s fantasy novel about a boy named Milo who, despite having all the time in the world, just can’t figure out what to do with himself. He’s got a room full of toys and books, but he’s bored and full of ennui. Luckily, one day a giant box in his bedroom arrives to change all that. Milo opens the box to find a tollbooth, which he sets up and drives through (using the small electric car that is apparently much more awesome than the ones you can buy your kids these days).

And into the land of Expectations.

Milo’s journey takes him through the Doldrums, into Dictionopolis and its dungeon, through the Valley of Sound and the Forest of Sight, down to Digitopolis’s number mine, and finally to the Mountains of Ignorance and the Castle in the Air. Along the way he meets a watchdog named Tock, the ever-present Humbug, and several other denizens of the kingdom (including my daughter’s favorite, Alec Bings, who sees through things).

Why does Milo undertake this journey? Ostensibly it’s to free the Princesses of Sweet Rhyme and Pure Reason from their prison in the Castle in the Air, but the real lesson of the story is that there’s a lot to see, hear, smell, touch, taste, and do, if only you stop to think about what’s around you.

As someone who’s always loved words — even as a kid — the wordplay in the novel was by far my favorite part. It still is. I’m not sure a six-year-old can get the full impact of that, but as an adult the wordplay is still pretty funny, and for adult readers without children, that’s the best selling point for the book. For kids, though, the adventures are perilous without being too frightening, and although Milo gets into trouble (usually by taking shortcuts), he often finds his own way out via hard work and determination.

Norton Juster, who also wrote The Dot and the Line, first saw his novel in print in 1961. It became a film in 1969, and I reviewed the film. (My daughter watched the film last week, by the way, and she really enjoyed it.) The illustrations in the book are by Jules Feiffer, and they’re actually quite scary for such a pleasant book. The Humbug looks like a giant beetle with no cartoonish features whatsoever; some of the demons are rather frightening; and when Milo meets the Which in the dungeon, despite the fact that the text indicates she’s a good which, my daughter actually asked me to turn my tablet away from her so she wouldn’t have to see. Just something to keep in mind for younger readers.

At twenty chapters, The Phantom Tollbooth isn’t a terribly long novel for an adult to read. If you haven’t read it, I recommend it; if you have, I recommend re-reading it. I have a copy that’s very well-read and well-used, down in a box somewhere, but now that I have a digital version I don’t have to dig it up. I’m sure I also have the marked-up version we read from in fifth grade, because I never throw anything away.

Note to Parents: Other than the somewhat-scary drawings, this book contains nothing objectionable and can be read by anyone. Of course, you should use your own best judgment when it comes to your children.