I’m sure many readers remember the kids’ novel The Phantom Tollbooth by Norton Juster. I read it several dozen times, including in fifth grade when we had to do it for class (even though I’d read it before at least twice). It’s a great book, and I’ll be writing a review of it after my daughter and I finish reading it aloud.

However, there was also a filmed version released in 1969 from MGM. I went looking for it recently so that I could show it to my daughter when we finished the book, but it wasn’t on Netflix. I found a copy, though, and watched it. Just for nostalgia’s sake.

And it held up. 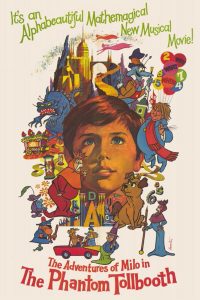 The Phantom Tollbooth is the story of Milo, a boy who is going through life on automatic. Nothing affects him, nothing interests him, nothing makes him care. As the film opens, he gets out of school and walks home through what I believe is San Francisco. When he gets there, his friend Ralph calls him on the phone and the two of them bemoan the fact that they have nothing to do.

Until Milo sees a huge box in his bedroom and asks Ralph to hold on.

Now, here’s where the film diverges from the book, because the tollbooth assembles itself, gives Milo a little car to drive, and urges him to go through it. Milo is suspect, but agrees…

…and finds himself in an animated world. Which he knows is animated. The scene where he figures out is pretty nicely composited, too, for a time when digital effects weren’t so prevalent.

Anyway, Milo drives his car into the Land of Expectations, where he meets a strange cast of characters. He’s joined by Tock the Watchdog as he makes his way to Dictionopolis, and the Humbug (Insectius Humbugius, if he may use the Latin) is added to the party. Milo’s journey continues toward his ultimate goal, The Castle In The Air, where he aims to save the Princesses of Sweet Rhyme and Pure Reason so they can bring peace and common sense back to the land of Expectations.

The film’s main stars are Butch Patrick (Eddie Munster from The Munsters) as Milo and Shep Menken (Garfield and Friends) as Tock. Voice acting greats Mel Blanc, Daws Butler, Les Tremayne, and June Foray also lend their talents to the animated portion of the film. I kind of wonder if Patrick was in the same room as Blanc et al when they were doing their recordings, and if he appreciated it at that age.

As with many kids’ films from that era, there were several songs, most of which have stuck in my head for the past 25 years — Tock’s song about “Time” being the most prevalent. Dean Elliott, who composed music for many, many animated shows, did the incidental stuff in a late-60s-early-70s disco style. I was bopping along; not gonna lie.

The animated sequences were directed by Chuck Jones and Abe Levitow, and it’s really obvious that it’s the traditional Jones style — especially in the way Tock moves and speaks. The world is psychedelic to no end, in a way that no live-action film of the day could ever have replicated from the book, and it’s in fact even crazier than what the literary version of Milo has to deal with. I’d love to see it on a big screen after a remaster, just to get an idea of how awesome it would be; watching it on my TV in 4×3 just isn’t the same.

I would recommend the filmed version of The Phantom Tollbooth to anyone who’s read the book. It’s a different interpretation, to be sure, and it’s much less scary (for example, the illustration of the Which in the original text scared my daughter, but the Which in the film is a kindly woman rather like one of Cinderella’s fairy godmothers). The message also is a good one: even if you have nothing to do, there’s still a whole wide world out there for you to explore and experience.

Plus, the movie’s only an hour and a half. Even Tock would approve of that expenditure of time.

Note to Parents: This film is intended for children. There’s no adult language, adult content, or inappropriate violence. There are some scary moments at the end — some of the creatures on the mountain are creepy looking or just plain frightening — but overall it should be fine for most kids who can handle a film like Ice Age or Ponyo. Still, you should use your own best judgment when it comes to your children.