I first started reading Star Trek tie-in novels when I was about eight. My dad hurt his foot and was in the hospital, and my mom brought me to a bookstore before we went to visit him. I found three Star Trek novels — My Enemy, My Ally by Diane Duane, Dreams of the Raven by Carmen Carter, and How Much For Just The Planet? by John M. Ford — and haven’t looked back. When TNG tie-ins started appearing, I bought them all, saving my allowance and gift certificates until I could afford them.

Unfortunately, while many were great, some… well, some were big-time stinkers. So here’s my opinion on the 10 worst TNG tie-in novels.

A couple of caveats: I stopped reading the tie-ins quite so religiously in the late 90s, so I might have missed a few. Also, this list will not cover the relaunch novels because they’re getting their own article.

The Plot: A gigantic creature is attacking ships in some far-off spacelanes. The Enterprise and a couple other starships meet with a race of traders to try and stop it.

Why It Sucked: I really wanted to like this book. I did. I’d been waiting for more than three dozen books for Diane Duane, one of my favorite TOS authors, to jump into TNG. Unfortunately, Duane didn’t cover any new ground here — this felt like an amalgam of Duane’s other ideas (especially all the Starfleet ships meeting up), and the main villain didn’t work for me either. It’s too bad, because, as I said, Duane has written some really amazing TOS fiction. Which you should read.

The Plot: Hey, remember in “The Big Goodbye” when Captain Picard had to greet the Jarada in their own language? Yeah, let’s go meet them and let them turn against us and capture the away team.

Why It Sucked: Another book I wanted to like. I’ve enjoyed other works by Mitchell, but this one didn’t do it for me. The concept of going back to the Jarada was a good one, but the book didn’t hold my interest at all and I didn’t feel invested in the story or the peril at all.

The Plot: The Enterprise gets an infection of some sort and is probably going to disintegrate into nothingness. As a result, the entire crew has to get off the ship and go to new assignments… unless Captain Picard has something to say about it.

Why It Sucked: This is the kind of high-concept Trek novel I generally enjoy. Unfortunately, the main problem with them is that we know that, by the end, everything is going to be okay. I think that’s why I prefer the relaunch novels and the non-canon stories (like New Frontier and Titan) — when stuff goes horribly wrong, there’s a chance not everyone gets to live through the end of the book. And, I mean, it was the Enterprise that was at risk of destruction, and we all knew that wasn’t going to happen. Plus, I think the virus was a sand monster or something. Not threatening.

7. The Battle of Betazed, by Charlotte Douglas and Susan Kearney, published April 2002

The Plot: Remember during DS9 when it was mentioned that Betazed was attacked by the Dominion and taken over? This book explores that event and what it means — Cardassians building a space station in orbit, the Enterprise trying to fight off the Dominion, and Mrs. Troi as a commando. Right.

Why It Sucked: The picture on the cover worried me from the start: Deanna in a commando uniform with a phaser rifle. Not that I don’t think Deanna’s perfectly capable of kicking ass and shooting Jem’Hadar, but the cover was just so incongruous that I didn’t know how we’d get to that point and I honestly didn’t think I’d believe it. Spoiler alert: I totally didn’t. I enjoyed the mental image of Mrs. Troi kicking ass, but the rest of the book wasn’t up to standard Trek fare — although, in the authors’ defense, the Dominion War tetralogy wasn’t either.

The Plot: Apparently there’s this “Dragon Empire” somewhere in the vicinity of the Federation and the Enterprise has been sent to make contact with them*. The thing is, the Dragon Empire’s enemies are ready to destroy them unless Picard manages to successfully broker a peace treaty.

Why It Sucked: This book brought us nothing new in the TNG tie-in universe. That was disappointing. I’d seen the Asian culture thing done better in Interesting Times by Terry Pratchett, and I couldn’t stop myself from making comparisons. Johnson and Cox have both written things I like — and Johnson is fairly well-known for her original sci-fi and fantasy — but this book didn’t work at all for me in any way.

5. The Captains’ Honor, by David and Daniel Dvorkin, published September 1989

The Plot: Remember those Roman guys from TOS? Someone gave them their own ship — an old Constitution-class one — and now they’re out there doing Starfleet stuff. Their ship and the Enterprise are trying to save the planet Tenara from the evil M’Dok Empire, but Captain Sejanus (the Roman dude) really wants to do bad stuff to Picard.

Why It Sucked: Given the Roman-style (almost Klingon-style) Magna Roman culture, how did Starfleet even give these guys a ship? I was eleven years old when I read this book and it didn’t make sense to me even then. I knew pretty much from page 50 or so who the real bad guys were going to be. And, of course, when Ensign Jenny showed up, it was fairly clear that she’d fall in love with someone evil. David Dvorkin wrote the fairly-decent Timetrap, but some TOS authors just couldn’t make the jump, and he was one.

The Plot: The Devil’s Heart, an artifact believed to bestow great power on the holder, is the main subject of this novel. Many try to get their hands on it, Picard does, and then bad things happen to him.

Why It Sucked: Given how much I loved Carmen Carter’s first TNG novel, I went into this one expecting to love it as well. Unfortunately, I think it may have suffered from my high expectations. This was a pretty generic chase-the-artifact story with a veneer of Star Trek laid over it, and I was disappointed.

The Plot: Data, Troi, and Wesley are captured while surveying a planet. Picard must negotiate for their release. I seem to remember something about a race of intelligent colored lights somewhere in there too.

Why It Sucked: I think more than anything I was let down by the ending of this book. I don’t remember much of it, except that the good guys won and the bad guys lost, but what I do remember is that I didn’t feel much closure at the end. No matter how great a story is (this one was about average for Weinstein), a bad ending can spoil the entire thing. And I’m not talking about a bad ending where the wrong people win — I write those all the time. I mean, this story’s ending just made no sense to me, and I felt like I missed something no matter how many times I read the book.

The Plot: The Enterprise is sent to deliver aid to the planet Thiopa, with which they are allied. Unfortunately, Thiopa is very much a have-and-have-not, most-people-are-downtrodden sort of place. Riker is captured by people the government say are bad guys, but it turns out there’s more to it than that.

Why It Sucked: I get the feeling that Weinstein wrote this novel to make a point, and it does do that. Unfortunately, it’s a bit heavy-handed (Trek is often light on subtlety), and at that age I wasn’t really equipped to understand it. I just didn’t care about the plight of the Thiopans, and I didn’t care about Riker being kidnapped, and I didn’t care that these guys were an important ally. And, by the way, what is it about the Federation that they keep picking bad allies? Were there really no worlds in that sector of space that they could’ve thrown a base on? 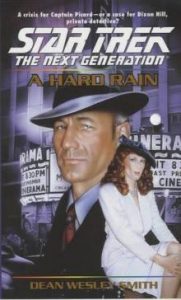 The Plot: The Enterprise is out of control, and the only people who can fix it are trapped in the holodeck, acting out a Dixon Hill scenario… and they have no idea they’re doing it.

Why It Sucked: What…? Just… I mean… what? What happened? There was stream-of-consciousness… and a red crystal/ball thingy… and people being other people… and… uh… yeah. Yeah. This book happened. I had no idea what was going on for most of it, which I can handle in small doses, but the Dixon Hill world isn’t enough to support an entire book and anyway we’ve already done a “Picard stuck in a Dixon Hill scenario on the holodeck” story — which won a Peabody Award, by the way. No, this book was a complete waste of paper. I honestly didn’t like almost any of Smith’s Trek work, and I can’t think of any of his original fiction that I’ve read — probably for that reason. His wife, Kristine Kathryn Rusch, is a fairly well-regarded SF writer, but I don’t know if Smith is really to my taste. Especially after reading A Hard Rain.

What tie-in novels do you regret reading? Tell us in the comments or the forum.

* This happens a lot in the tie-in novels. An editor really ought to do something about that.