Every time I read a YA novel, I wonder why all novels don’t move at the same pace. I’m not missing anything in the YA genre — the characters are just as developed, the action is just as action-y, and the story is just as engrossing. I just don’t have to slog through hundreds of extra pages of tangential plotlines and lovingly-rendered character descriptions to get to the good stuff.

And I think that adequately describes Allen Steele’s new YA sci-fi adventure, Apollo’s Outcasts, which will be published this November by Prometheus Books: for the most part, everything extraneous has been trimmed away, leaving a tightly-written, fast-paced novel that I quite enjoyed. 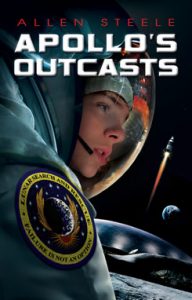 The story of Apollo’s Outcasts is told by Jamey (James) Barlowe, a young man who lives in Maryland and is confined to a wheelchair — he was born on the Moon, and his body is incapable of moving around in Earth’s gravity. Now he lives with his dad and his two older sisters, Jan (who has assumed all the “mom” duties) and Melissa (the stereotypically-vapid teenage girl). But late one night Jamey’s dad hustles the four of them into the family van and they end up at the nearby spaceport, where Jamey is to be sent back to the Moon to escape a political uprising just next door in Washington, D.C.

Once on the Moon, Jamey’s disability is no longer a problem, and he quickly finds himself trying to become part of this small, tight-knit community. Along with his sister and five others — including a girl named Hannah who takes an interest in him — Jamey learns how to live on the Moon. But when the new President of the United States threatens to send military forces to Apollo — one of the two colonies on the Moon (the other being run by the Chinese and their allies) — in response to a trade embargo, Jamey finds himself wanting to do more. Luckily, as a part of the Lunar Search and Rescue group, he can. But, perhaps exactly as unluckily, that means he’s going to be on the front lines when U.S. troops land.

I spent about two-and-a-half hours reading this novel — the first 90 minutes all in one go, late one night. I was quite shocked at just how quickly the story moved along. This isn’t a short book — my e-reader clocked it at 300 pages — and here I was halfway done and perfectly ready to keep going. But it was almost 2am, and I had to go to sleep. I ended up finishing the third part of the book while my daughter was at the dentist* and the fourth that night in bed. Now, I know I’ve said at some point in the past that I read the final Harry Potter book in under five hours (not to brag, just to give you a baseline for my reading speed), but on the other hand it took me substantially longer to finish Wrayth, which didn’t have as many pages. I think that, in that regard, Steele has definitely written a successful novel: it not only kept me reading, but it also made me want to read more, and faster, so I could consume more story and see what happened.

The book is also quite scientific in nature. Steele includes a diagram of the Apollo base at the beginning and a couple of pages of citations, disguised as acknowledgments, at the end. I’m no scientist, only a sci-fi fan, but the various technologies he describes in the book seem pretty plausible and it’s clear that he knows an awful lot about this particular topic. I completely bought into every aspect of life on the Moon (with the exception of the average age of a LSR ranger), and as with a lot of these types of books, as we grow closer to the ability** to really do all the things we see in sci-fi, fiction about it becomes more realistic and more believable.

I do wonder a bit about authors who make the shift from adult fiction to YA, though, because with YA the bad guys are much more clearly-defined and there’s often — but not always — far less intrigue. What I mean is, while the political message of Apollo’s Outcasts is clear and while it’s obvious that the President is the bad guy, there’s still a villain on the Moon, and it’s quite evident by the end of Part Two not only who that villain is but what s/he is going to do. I wonder how these authors feel about… I don’t want to use the term “dumbing down” because that’s not what happens… so let’s say “simplifying”… the motivations of villains in their books. I’ve read a fair bit of YA in the past couple of years — The Hunger Games, Ship Breaker, Railsea — and in all three of those books the motivation of the villains was clear and present to me. Today’s YA reader, I think, is a lot more sophisticated than I was at that age***, and if we’re addressing more complex problems like governmental uprisings, physical relationships, and hard science, then I think we can afford to let our villains be more subtle. It’s not a criticism of Apollo’s Outcasts per se, just an observation on the field at large.

On the whole, Apollo’s Outcasts is a good book, a fast read, and a story that is accessible not only to the YA audience but to an adult one as well. Allen Steele has been writing for a long time, and he knows the craft of this sort of story — anyone who’s read his Coyote series is well aware of that, and if you like this book, you should move on to that one next. But even if you don’t want to do that, you’ll still be satisfied with this book; it’s a strong sci-fi adventure novel with a lot of good science that doesn’t get bogged down in the detailed explanations — and, honestly, even the infodumps are interesting because, unlike fantasy novels that focus on magic, most of the stuff in Apollo’s Outcasts is not only plausible but also within our reach.

Hopefully, at some point in the near future, we’ll bother to grasp it.

Note to Parents: This novel contains violence, including violence committed by children and violence committed against children. It also contains scenes of bullying and one area of mature — but not explicit — content. Anyone who can handle the later Harry Potter novels (Goblet of Fire and beyond) will be able to handle the content of this novel. Of course, you should use your own best judgment when it comes to your children.

Special thanks to the novel’s publisher, Prometheus Books, for providing a review copy.

* For those of you without kids: a standard well-child checkup at a pediatric dentist takes about half an hour.

** If not the impetus. Don’t get me started on the space program and its massive failure to get us anywhere near Heinlein’s predictions.

*** I say that as someone who started reading adult-level sci-fi around age nine or ten. However, YA SF in the 90s wasn’t nearly as grown-up as it is now. For starters, the characters in the Planet Builders series definitely didn’t have sex or even come close to it, but in Little Brother the main character not only has it but — and this is key — nothing bad happens as a result. See, Joss Whedon? Sex doesn’t have to ruin lives.