The following contains spoilers for Geist and Spectyr, the first two books in the series.

I tried several different thematic ways to approach this review, but I had a lot of difficulty doing that. There’s a lot going on in this book, and I couldn’t really find any singular thing to tie it together because, the moment I thought I was on that path, things changed. 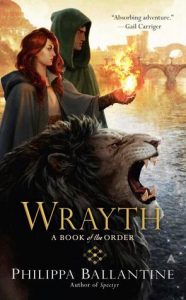 Wrayth is the third Book of the Order. It begins a few weeks after its predecessor, Spectyr, with the main character Deacon Sorcha Faris trapped inside her own body, unable to move and barely able to communicate. She’s being tended by her estranged husband, Kolya, which doesn’t exactly please her partner, Deacon Merrick Chambers. But Merrick has found intrigue of his own, and he’s concerned that a relative newcomer to the Emperor’s court, del Rue, is exerting an undue influence. He goes to see* the Emperor’s sister and is later taken prisoner, only to be held in a room with the power to completely shut down his magical abilities. But he’s not the only one; Zofiya (the sister) is kidnapped specifically to give the Emperor a reason to go after the Deacons, setting in motion a sinister plan to destroy those with the power to protect the world from geists — left-behind echoes of the dead with the ability to harm the living.

Meanwhile, while all of this is happening, Raed Rossin, the Young Pretender — and possibly the true heir to the Emperor’s throne — is on a quest of his own: his sister is missing, and he needs to rescue her. To do so, he makes a deal with the geistlord** that lives inside him — the Rossin (its name) will warn Raed when it wants to come out, and Raed will in turn let it do what it will.

I think it’s safe to say without worrying about spoilers that eventually the three main characters (Sorcha, Merrick, and Raed) end up in the same place at the same time, only to find that del Rue and the Emperor are up to far more than just a little bit of intrigue, and if they succeed, the world may soon belong to the geists… or worse.

I really liked Geist, the first book in this story. I enjoyed Spectyr as well. Wrayth has all of the hallmarks of Ballantine’s previous Order novels: fast pacing, strong characterization, clever use of tropes, and there’s not an overabundance of exposition. I still maintain that a lot of doorstop-fantasy writers could take lessons from Ballantine in that last regard — it isn’t necessary to write a book that could be used to hammer a railroad spike just because the author can. In fewer than 1000 pages, Ballantine has set up a major showdown, given us characters we can root for and characters we can despise, shown us a massive fantasy world, and created a magic system that is both complex and easy to understand. And those 1000 pages — three novels, not just one massive tome.

But I also think this book suffers in some ways from being the series’s Empire Strikes Back. Geist was more a stand-alone novel, and Spectyr set up what’s going on in Wrayth. But Wrayth is clearly a ramp-up to the showdown with the true Big Bad (who, by the way, I was most emphatically not expecting when s/he was revealed), and once I realized that, I think in some ways it negatively impacted my enjoyment of the story. At the end of the first two books, Sorcha and Merrick clearly defeated the bad guys and even though Sorcha was severly incapacitated I still had a feeling of closure — much in the same way that, at the end of A New Hope, the Death Star was destroyed but the rest of the Empire still existed. I didn’t get that feeling of closure with Wrayth, and while it wasn’t as much a cliffhanger ending as Hunter and Fox, it was still clear that nothing had really been resolved (with the exception of one plotline that was really more tangential to the main one than the others).

That… was a bit annoying.

So was the thing I’m about to put here in cyphertext — it is a major, major spoiler, so be warned before you go to ROT13 to decipher it.

Also, the sex scene at the end didn’t feel terribly organic (or necessary), but I can forgive that.

Overall, Wrayth has all the hallmarks of a good fantasy novel, and I did enjoy most of it. There were just a few things in it — unfortunately, one of them very large — that detracted from my enjoyment of the story. The ending is suitable for a second-in-the-trilogy*** tale, and I really am looking forward to the final book (which Ballantine has already written, according to her Twitter updates) — if for no other reason than to see how the Big Bad is going to enact his plan and how Our Heroes are going to stop that from happening.

Or, possibly, die trying. Hey, y’know, it could happen. I guess we’ll find out soon enough.

Note to Parents: This novel contains violence, nudity, adult situations, and sexual situations. I would rate the book a hard R, if it was a movie. It’s not really intended for teens of any age, but anyone who could handle, say, Total Recall (the Arnold one, not the Farrell one) should be okay with it. Of course, you should use your own best judgment when it comes to your kids.

Special thanks to Ace, the novel’s publisher, for providing a review copy.

** An extremely-powerful geist with abilities to match even the most powerful Deacons.

*** I realize this is actually the third of four books, but as I said the first one was more a stand-alone novel and the second began the more unified “trilogy” portion of the story.