The term “doorstop novel” applies to any book that is so large you could use it as a doorstop as well as reading material. They’re enormous, take forever to read, and often leave readers with more a sense of accomplishment (“I can’t believe I ate the whole thing”) than satisfaction*. In books like that, the author feels the need to explain every single detail, every relationship, every physical feature, every magic spell… everything.

Of course, you can go in the other direction, and explain too little. Books like that have their own problems.

But in Geist, by Philippa Ballantine, I think there’s just the right balance of explanation and action. Think late-90s genre novels — Mercedes Lackey, Melissa Scott, and their ilk. That’s the feeling I got while reading, at any rate, and for me, that’s a good thing. 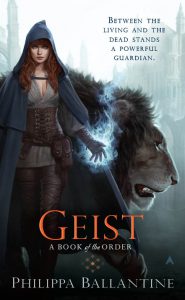 In Geist, Deacons Sorcha Faris and Merrick Chambers — field agents of a religious order dedicated to protecting people from geists (creatures from the Otherside) — are sent to a faraway outpost to find out what’s causing geist attacks on the townspeople. When they get there, they find there’s — naturally — more to it than meets the eye, and their unexpectedly-strong Bond leads them to reveal a conspiracy that could destroy the home of the Order itself.

Geist is the first book I’ve read in dead-tree form in a while, and it was refreshing to actually turn pages for once. And the book is definitely a page-turner — after a slow beginning, the story moves along at a fair clip. It really heats up at the end, with a lot happening in a relatively-small number of pages. In that way, it really does follow the slow-build-to-frenetic-climax of many of the “early” fantasy novels I read. I definitely enjoyed the reading.

But that’s not to say the book is without its… well, I don’t want to call them flaws, because they’re really not, so I’m going to call them points of discussion instead.

Let’s start with the main characters — though they are unique in their own way, I felt as though they were a little too slavish to the Big Book of Fantasy Tropes. Sorcha, the main character, is a cross between Mel Gibson in Lethal Weapon, Hannibal Smith from The A-Team, and Anita Blake from the novels by Laurell K. Hamilton. She kicks ass, takes crap from no one, smokes cigars, and has a nagging internal voice that, sometimes, needs to shut up and let the story progress.

Now, before you worry that Sorcha’s going to start sleeping with everything that moves (and changes shape), or gaining a new power every week, I will clarify my Anita Blake comment and say that what I saw in Sorcha was more “early Anita”. But I also think that the author is so connected to her audience via social networks and conventions that, if she started doing power-of-the-week books or making Sorcha into a Mary Sue, the audience would be able to talk her down. Although if Sorcha starts saying “alright” or “me, either” (both sic), you might want to start to worry**.

The rest of the cast includes Sorcha’s partner, a young, just-minted deacon named Merrick Chambers, and he is powerful, humble, unafraid of Sorcha’s prickliness, and prone to a white knight complex. And then there’s Raed Rossin, Pretender to the throne of Vermillion, who is everything a prince-turned-pirate-captain should be… and a werelion.

Oh, and if anyone reading the book didn’t look at Nynnia and say “well, now, her appearance certainly is significant and convenient,” then they weren’t reading very carefully. Another thing right out of the 90s, right there with the long journey, the remote outpost, the three-good-guys-against-the-other-good-guys, the secret passageways, and the evil plot that felt a little too “stock” to me.

There’s also sex — because, hey, it’s Philippa Ballantine, and if you don’t know she runs a very successful erotica podcast, you’ll find out when you get to that chapter that she’s great at writing sex. That too felt like the sex scenes of 90s genre novels — and given that I was in my late teens and early 20s around that time, you can imagine that I enjoyed the nostalgia it brought on.

Without spoiling the ending, I will say that I felt like too much happened too quickly, and I had issues with the Boss Fight. But outside of that, the rest of the issues I mentioned above, I can pretty much ignore. See, I’m not reading this book because I want it to be the next great Kiwi*** novel. I’m reading it because I think it’ll be an enjoyable book. And it is. It has action, humor, sex, and intrigue; the characters are fully-developed and well-rounded****, and they change as the book progresses. The world is built enough for me to know what’s going on and to understand the story without being overwritten, and the same with the magic system.

In short, Geist combines the best of what I like in 1990s fantasy fiction with the scope of a doorstop novel… and then pares out all the extraneous crap that makes a fantasy novel into a doorstop. What’s left is 300 pages that make up an enjoyable book to read, even if it’s got a few too many tropes that we’ve all read before.

And if you really, really need to keep a door open, I guess you could wedge it in there. But then Sorcha might call up pyet and burn your door to ash, so… you know… your choice.

Special thanks to Ace, the novel’s publisher, for providing a review copy.

Note to Parents: With the exception of one scene of semi-explicit sex, nothing in the novel should be unpalatable to anyone who can watch a PG-13 action film and not have nightmares. Of course, you should use your own discretion when it comes to your children.

* Neal Stephenson excepted. And I know some people really like Wheel of Time but I never got into it.

** As you can see, I have issues with the Anita Blake novels. I’m reading Hit List right now, and when I do the review of that, you’ll see exactly why I’ve made some of these points.

*** Though she now lives in the U.S., Ballantine is from New Zealand.

**** Seriously, Sorcha’s hair being red/copper is mentioned so often that, if this was a movie, it would get a mention in the ending credits.