I’ve only seen a few episodes of Sliders, and it’s been a while, but as far as I can remember the premise of the show was quasi-similar to Quantum Leap: a team of scientists slides sideways into an alternate version of Earth, does something that can be resolved in a 42-minute episode, and slides on. A quick check of Wikipedia tells me that I’m more or less on the money there.

And that kind of explains to me why parts of The Long Earth, by Terry Pratchett and Stephen Baxter, felt vaguely familiar. 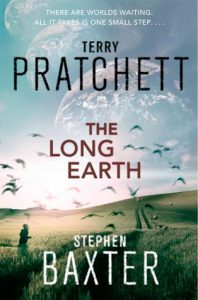 The Long Earth is a story of stepping. Not this kind, though. The kind where, if you have a Stepper Box and a potato to power it, you can move into a parallel Earth simply by taking a step to the east or west. Stepping opens up an infinite number of new worlds for humanity to colonize, so long as they don’t bring anything iron or iron-based with them — it gets left behind — and as long as they can handle the side-effects of the procedure — usually nausea and disorientation. Building a Stepper Box is easy; it just takes a few cheap parts from Radio Shack and, as mentioned before, a potato*.

The book itself primarily follows Joshua Valiente, who begins the story as an orphan living in a rather-unorthodox home run by rather-unorthodox nuns. On Step Day, as it’s called, Joshua figures out that he’s pretty good at stepping — so good that he doesn’t even need a box to do it — and decides that the Datum (the original Earth, where you and I are right now) just isn’t for him. Some time later, he returns to the Datum and comes to the attention of transEarth, which is really just a front for a Tibetan motorcycle repairman who has since become an artificial intelligence. Since this novel was partly written by Terry Pratchett, of course the character’s name is Lobsang. Joshua and Lobsang go on a journey westward, through countless Earths, exploring.

The story is interspersed with other, smaller tales, similar to Greg Bear’s Slant. We have Monica Jansson, a police officer in Madison, Wisconsin (where Joshua is from), who becomes the de facto expert on step-based law enforcement. We have the Green family, who migrates to one of the worlds west of 100,000, and that story gives us a pretty good look at the resurgence of the American pioneer spirit. We also we have the obligatory glances at government, politics, religion, and isolationism peppered throughout.

The main bulk of the story, though, is Lobsang and Joshua traveling westward and discovering the various life-forms that have developed in the Long Earth. As they go, they discover that something is upsetting the higher-order creatures, forcing them eastward (toward the Datum), and take it upon themselves to figure out exactly what’s causing it and if they can stop it.

I went into The Long Earth expecting something more Pratchett-like — more humorous, more clever, and more satirical. In other words, more like Good Omens, Pratchett’s collaboration with Neil Gaiman. But Baxter isn’t Gaiman — not making a value judgment here, just a statement of fact — and also Pratchett is older and is dealing with health issues, as I’ve noted in previous reviews of Pratchett’s books. I’m not how Baxter and Pratchett collaborated on this book, and how much either author wrote, although overall I didn’t see a ton of Pratchett’s signature style shining through. It was present, sure, but not as much as I’d hoped.

Which isn’t to say that I didn’t enjoy the novel, because I did. It was an interesting concept, and once I got past chapter five or so and the story really hit its stride, I was quite interested in finding out what was going to happen. Joshua and Lobsang’s journey was by far the most compelling part of the story, and the interplay between the two of them was well-written and dynamic while also retaining some of that Data-and-Geordi feel we all loved in Star Trek: TNG. The fauna developed throughout the novel was suitably weird, and there was one “joker” world that, while somewhat unexplored in the text, led to even wider-spanning discussions between the main characters.

Unfortunately, even though I liked most of the book, I wasn’t terribly pleased with the way that it ended. Here be spoilers; go to ROT13.com to decode them:

I think the only other place the book fell down was that there was virtually no exploration — or even discussion — of the worlds east of the Datum. Early on it’s revealed that Americans tend to go west while Asians tend to go east, but that was about it.

I’m not unhappy to have read The Long Earth. I’ll gladly read anything Terry Pratchett puts out that I can get my hands on (without spending too much money), because he’s written so many books that I do like. I just think this book doesn’t quite live up to the expectations I have of a Pratchett novel. I know that a good portion of it was written by Stephen Baxter, but since I’ve never read anything by him, I can’t make an informed statement as to whether or not I’d like his books too. I probably would, but I just don’t know.

And, really, that’s the problem with collaborations: either they work really well, or they don’t work well and one side or the other gets blamed. Just like being back in school.

I’d say that, if you haven’t read The Long Earth yet, wait until it’s in mass-market paperback. The Kindle edition is currently $13 USD, which is a little steep for a book you’re not sure you’re going to enjoy, but when the MMPB comes out I expect the Kindle edition (and corresponding Nook and iBooks editions) to drop in price somewhat. Unless you’re a huge fan of Pratchett or Baxter, I’d wait until then to pick this one up. It’s an interesting world, but it’s not Discworld, and I think that, really, that’s what Pratchett fans are looking for.

Note to Parents: While this book does contain terrorism and violence, it’s not very explicit. There’s not much bad language and almost no adult situations. A YA audience can handle this book, as long as they can get through the confusing (and slightly boring) bits in the beginning. Of course, you should use your own best judgment when it comes to your children.

* Plus, if you get stuck somewhere, you can always eat the potato. Nourishing, that is.