For the first few seasons of Star Trek: Deep Space Nine*, many critics said it was boring because they had no starship and couldn’t go anywhere. Though there were glimmers of greatness, the show didn’t get really good until after Worf and the Defiant arrived.

That’s kind of how I felt about Pirates, Nobilis Reed’s follow-up to Scouts.

WARNING: Pirates is a novel for adults, and as a result the review contains discussions of explicit sex. Reader discretion is advised. Also, this review contains spoilers for Scouts. 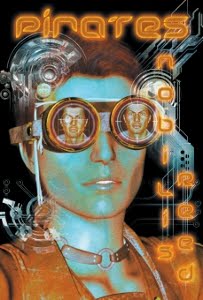 When we last saw Challers Dizen and Valka Parl, they had escaped the clutches of the Scouts and found sanctuary on Port, the home station of the Pirates. Valka had been genetically resequenced into an Ovor, a human offshoot with four breasts and the ability to give birth to several eggs in one go. Challers had also learned that the Scouts are using crisis orgone** from Ovor eggs to power extremely destructive missiles which they plan to use against the Pirates.

Once they’re on Port, Challers and Valka must figure out where they go from here — they know what the Scouts really are, and what they’re doing to the Ovor eggs, but how can they stop them while they’re basically confined to quarters? The answer: they must become Worthies, Port’s equivalent of reality television stars. Part Real World, part futuristic-Renaissance-faire, becoming a Worthy means having your every move recorded and broadcast — and that means having sex as well as having duels. But to Challers it also means he’ll gain enough standing with the Pirates to join a raiding ship and take on the Scouts.

Unfortunately, the process of becoming a Worthy and gaining that respect is not the most exciting part of the book. It’s mostly a lot of talking, a lot of duels, a bit of training, and a hell of a lot of sex. The reasoning for some of the duels reveals Challers’s youth, and some of the antics the Pirates get up to seem pointless, but I think the author may have been trying to make a point about the culture of reality television and social media. In that respect, it does work, although it didn’t really work for me as a plot device.

As for the sex, it’s definitely up to the author’s previous standard, although some of it I felt was more like “what else can I put in here that I haven’t already done?” I find that to be a dilemma I’ve faced in some of my own writing — I’ve already had my characters do X, but now they’ve grown and changed and I need to make the action more interesting or sexy, so let me add Y and Z. To that end, Challers does a very interesting thing with his hand, as well as making the discovery that Valka is a bit of a sub who likes to be spanked***. He also overcomes one of his greatest fears by “screaming at the void”, a rather novel sex act.

While all of this is happening, we’re also introduced to Renedy Jawmet, a contemporary of Challers and Valka who still lives on Stakroya Station. After they left, Renedy was assigned to the communication center as an apprentice. When her supervisor sexually harasses her, she turns him in and manages to earn herself the top post in that department. To get help, she recruits her close friend Starholder “Star” Massey**** and begins training him, even though she herself is still learning the ropes.

And that’s when Renedy realizes there’s a lot more going on at Stakroya Station than anyone could have expected. The captain institutes new policies that basically require everyone to marry and have children, and orders Renedy and Star to install spy devices in every cabin. Star, being Renedy’s friend, offers to marry her — they like each other, after all — and, as a precursor to that, they book a private room to have sex.

The problem is that, for Renedy and Star, they haven’t quite found exactly what they’re looking for.

Despite seeming completely disparate at the beginning, the two plots do knit together nicely, and there’s a pretty good Boss Fight as well as the return of a character against whom Challers holds quite a grudge.

The things I really liked in Scouts are back in Pirates — worldbuilding, characterization, and wry humor, including a few things that made me chuckle out loud. However, I didn’t feel the sense of discovery with Pirates that I had with the previous book; mostly I found myself reading the first parts of the book and realizing that there wasn’t enough happening. As I said in my Scouts review, that book felt like sex was being used in places where, had the book not been for adults, there might have been action. I had the same feeling here, although without the newness of Scouts it was more difficult for me to really enjoy what was going on because I wanted the plot to be advanced, as well as the characters’ interpersonal relationships — there’s a lot of that latter bit, and the author is very good at creating realistic relationships between his characters.

When the action finally started picking up, and the sex took a backseat to it*****, that’s when I really started enjoying the story. Challers is an intelligent young man, and he uses the abilities he learned with the Scouts in some truly innovative ways, including what may be these people’s first experience with the Star Trek-style transporter. And, in the end, all the work he put into becoming a Worthy pays off — I’d tell you how, but that would spoil the ending.

The book itself contains Hunters on the “also by this author” page, which means that there’s going to be a third novel. The main sequel hook is set at the very end, and it’ll be interesting to see how Challers and Valka deal with it — and also to see what happens next.

Reed is a good writer — as I said, he really gets into his characters’ heads, which is all the more difficult when the story is told via first-person-limited perspective. I just felt that the first 50-60 percent of the book didn’t have enough plot advancement for me to enjoy it as much as I should have. I think that, in Hunters, if Challers spends more time on the ship and out doing stuff, and less time on Port dealing with Worthy politics and reality television-type things, I’ll like it more than I liked Pirates. Ultimately, it’s hard to mix sex and relationships with action-packed space opera, and this book tips a little too much toward the former for me.

Special thanks to Logical Lust, the novel’s publisher, for providing a review copy.

Note to Parents: As I said at the beginning, Pirates is a novel for adults. It should not be read by anyone under the age of majority in their community.

* And, really, couldn’t they have come up with a better name for the station than that?

** “Orgone” is the energy source used for weapons, propulsion, and life support. There are three types, the main two being: crisis, generated by fear and stress, and transcendent, generated by sex.

*** Not totally unknown to sci-fi; at least one of Robert Heinlein’s characters has admitted she liked it when the MC threatened her with it.

***** I’d like to make an ass-related pun right about now, but there isn’t content to support it. So make your own, in your head. I’ll wait.