Warp drive. Hyperspeed. Folding space. Immersion. The Infinite Improbability Drive. Read five different pieces of science fiction and you’re guaranteed to find five different propulsion methods with five different names. But one thing I can guarantee* is that you’ve never seen a starship being powered the way Nobilis Reed does it in Scouts.

WARNING: Scouts is a novel for adults, and as a result the review contains discussions of explicit sex. Reader discretion is advised. 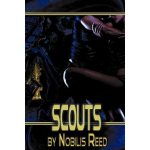 In the far future, when no one knows exactly where humanity came from, humans live in stations spread across the known galaxy. These stations must place tight controls on their population, or else their resources could run out and people could die. So, when a station goes overpop, the extra people are shipped off to the Marines, the Merchants, or, if they’re very lucky, the Scouts.

Challers Dizen and Valka Parl, two young people who want to control their fate, figure out how to get into the Scouts, and just in time — right as the Marines are attempting to press-gang Challers, he and Valka are met by Captain Shirley Smith and her associate, Masters Pale, and it seems like they’ve got exactly what it takes to join this elite group. They’ve heard of the Scouts, and they know they take the best and brightest, but they aren’t sure why Scouts are only recruited if they’re virgins.

It’s because, as the author so eloquently puts it**, they have to watch Shirley and Masters “fucking them across the stars”.

It actually makes sense, too — there are different types of “orgone” energy, and one of them is sexual (“transcendent orgone”). There’s also “crisis orgone”, which is generated by anger or fear — this is important later — but the Scouts hold themselves apart because they use the transcendent kind.

The bulk of the novel is taken up by a rather standard-for-the-genre (the sci-fi genre, not the erotica genre) “raw recruits go to the academy” story, except that there’s a whole lot more sex. In addition to history, mathematics, hand-to-hand combat, and astronavigation training, Challers (Valka fades a bit into the background at this point) must learn the best ways to please a partner, and also for the partner to please him. The more pleasure that’s generated, the more powerful the Scout ship is, because higher pleasure generates more orgone.

But after a while, Challers starts to become disillusioned with his training — despite an interlude with a Scout named Grecca who is nothing like Shirley, Challers’s mentor — and he also figures out that there’s more to the Scouts than meets the eye. He meets a disgruntled cadet whose body was genetically reprogrammed in hopes that she would be a better Scout. He learns about the newgens, humans who were genetically changed centuries ago to better adapt to their environment. And he discovers that not everything is as it seems on the Scouts’ home station.

The author creates a very interesting world in Scouts — the orgone drive, the way the human diaspora has changed — and his characters are certainly well-rounded. It’s a little hard at first to figure out why Challers is so opposed to violence and so willing to discuss things into the ground, and I think that makes him somewhat unsympathetic at times even after we learn why this is the case. I also wasn’t really thrilled with the way Valka reacted to some of Challers’s actions in the early days at the academy. It felt as if the author had a specific path he wanted to follow to teach Challers the lessons he needed to learn, and Valka had to react a certain way. Similar things happen later with Shirley, especially after Grecca departs the station.

Because this is a novel for adults, I think some of the areas where I might have expected an action sequence — simulated space battle, fight between cadets — are replaced by sex scenes. And not just traditional-human-on-traditional-human. Challers experiences sex with several newgens, and as both a man and a woman. Through these scenes we learn not only his likes and dislikes, but also how he is able to overcome his fears and discomforts. Other than a little repetitiveness relating to how Challers feels about things, I thought the sex was well-done, enjoyable to read, and remarkably egalitarian. Some of the word usage seemed a bit anachronistic in context, but then, the audience is humans living in the 21st century, even if the characters are not.

I did have some issues with the end of the novel — it felt like things happened very quickly, and some big-time truths about Valka’s past were delivered and then left behind (perhaps for exploration in a sequel). The final battle delivers a not-unexpected twist and introduces us to the real villains of the story (the reader kind of figures it out based upon Challers’s experiences), and the ending shoehorns a whole lot of pre-exposition for the sequel into a very small space, including some details that seemed to me to really slow down the pacing.

I was first introduced to Scouts on the author’s podcast, and that may have influenced the way I experienced the novel. Readers coming to it fresh won’t have the insight I did when I read it for review purposes. I definitely enjoyed the story, and those of you who’ve read my reviews before know I love good characterization and world-building, which Scouts certainly has. And, while the author is definitely good at writing sex (for more on that you should certainly check out his podcast), I don’t see this book as the kind of literature you would take to bed as a sexual or masturbatory aid. Unlike what I personally call “traditional” erotica, Scouts is a sci-fi novel for adults which includes explicit sex scenes***, and said scenes absolutely take full advantage of the genre itself. Seriously, the one with Challers, Shirley, and the newgen will stick with me for a while. I do think the sex is less female-centric than much of the erotica I’ve read in the past — written by men or women — although that isn’t to its detriment.

There isn’t a lot of sci-fi erotica that isn’t either derivative or Mary-Sue in nature. Scouts is most definitely not one of those; like the Scouts in the novel, I think it has started scouting out a trail which will hopefully be well-traveled one day — where sci-fi authors can write their characters having sex in logical situations and not have to censor it for a mass-market audience. There’s still a few places on the trail that Scouts may not have fully tamped down, but I certainly enjoyed the book and am looking forward to the sequel.

Special thanks to Logical Lust, the novel’s publisher, for providing a review copy.

Note to Parents: As I said at the beginning, Scouts is a novel for adults. It should not be read by anyone under the age of majority in their community.

* For certain values of “guarantee”. I had never heard of it before, and I’ve read a lot of sci-fi in my time.

** Seriously, it’s a really well-delivered line in the novel.