Hello 2011! I hope everyone had a happy and safe holiday and are ready for a kick-ass year… wait, it’s halfway through January already? Oh boy. But hey, this year is an odd number, and a prime one at that. That’s got to be a good sign. Right? Right.

My last post about superhero prose fiction seemed to generate a few comments, not only here but also over at io9 who were kind enough to reblog it. I made a lot of omissions, some glaring, and I knew I would. I’ll return to the subject of superhero prose fiction later on where we can talk properly about examples of the genre. In that post I missed a lot of titles (Playing for Keeps, Brave Men Run, George RR Martin’s Wild Cards, Union Dues, In Hero Years, I’m Dead, to name just a few), but only because I don’t think these are (or were) signs particularly of a forthcoming movement towards superhero prose fiction. As I said last time, superhero prose fiction has been around almost as long as superhero comic fiction has been, possibly starting with The Adventures of Superman by George Lowther from 1942 (the plot of which, involving ghost ships and Nazis, sounds awesome). While it’s probably impossible (and foolish) to try and generate a comprehensive list of superhero prose fiction, we can at least take a gander at some prime examples of the genre a bit later. As it happens, my prediction might have been right up the wazoo anyway, as it looks like the YA dystopia is shaping up to be the Next Big Thing. I might be wrong but it seems to me that the vampire/werewolf trend originated in YA books too, before influencing more adult-oriented works. Although I’m not quite sure where the fashion for zombie originated – is there a YA zombie series that I don’t know about?

Anyway, I wanted to touch on superheros again for a moment as there is something that has been bugging me recently. NBC’s new superhero TV series The Cape has started, as has the Cartoon Network’s latest DC universe animated series, Young Justice. The fact that they both debuted at more or less the same time is just coincidence and not particularly relevant, but it does serve to illustrate a little problem I – a comics fan and superhero write –  have with the genre.

Uh-uh. Hold the hate mail and move the mouse away from the comment button. Let me explain.

The Cape is attempt – one of the first, I think – at creating an original, made-for-television costumed superhero. Costumed is the key here, although it’s probably unfair to single out this one particular issue with The Cape given that it really is the least of the show’s problems (which, off the top of my head, include the title, the premise, the cast, the characters, the plot and the writing… but other than that it’s pretty great, no?), but it does illustrate my point. Vince Faraday, aka The Cape, looks immensely silly when dressed up as the superhero. Okay, the suit is assembled from bits and bobs from the Carnival of Crime (yes, the Carnival of Crime) and based on a comic book character beloved by his son (although not a comic book written like I have ever read, although I suppose Vince was adding in the exposition and description himself when he read an issue to his son in the first episode). But… no. It’s impractical and is looks silly.

So what’s new? This is comic book stuff, right?

Actually, yes it is. The Cape would work fine as a comic book, assuming it was written by someone who knew what a comic book was (unlike the writer of the TV series it seems). The bits we see of the actual (fictional) comic in the TV show looks okay. And superheroes in cloaks and hoods are a dime-a-dozen, and there’s plenty of scope for dramatic flowing fabrics. 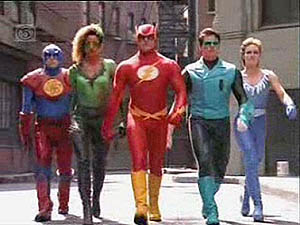 It’s perhaps telling that other, more successful television superhero shows have neatly avoided the problem of silly costumes by not featuring them at all. Everyone in Heroes was in civvies. The other currently screening superhero TV series, No Ordinary Family, likewise has avoided comic book cliche, visually at least, even if the central premise of the story is as old as the hills. Misfits, that UK subversion of televisual superheroics clad our anti-heroes in the orange jumpsuits required by their community service, and even cracked a joke about traditional superhero costumes in one memorable scene from the second series. Notably, when a costumed superhero does appear, things start to get creaky, because it’s a guy in a silly suit (although they didn’t do that bad a job). Looking at earlier examples, The Flash was stuck in a bizarre muscle suit in 1990, and the less said about the 1997 attempt at a live-action Justice League of America, the better. 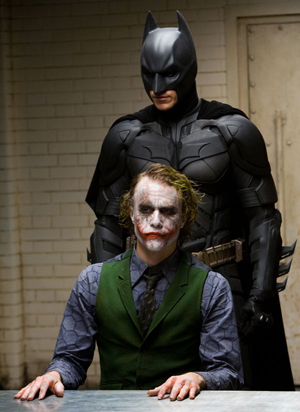 The prime example is The Dark Knight. I’m a Batman fan and I love this film… but Batman himself is a bit silly. When he sticks to the shadows like he should, no problem. But there is one surprising scene where he terrorises The Joker in a police interview room. A brightly lit police interview room. The Joker here looks amazing, as tailor-made purple suit aside, he is just wearing clothes. But in the glare of the fluorescent strips, Batman looks very, very silly. An interesting experiment in creating a more comic book-like Batman is the fan film Batman: Dead End, which features a Batman in grey spandex fighting… erm, aliens (as in Aliens aliens). Okay, so the story is a little odd, but Batman looks pretty good. However, sticking an actor in skintight lycra causes all sorts of problems with movement, result in the need for careful choreography to avoid unsightly creases and bulges. The forthcoming Green Lantern film is avoiding this by using an entirely CG costume, but from the trailer it looks a bit peculiar (although it would help if the eyes of the mask were whited out, like in the comic).

Of course, I’m generalising. There are exceptions. Marvel seem to be doing a better job. Iron Man looks amazing, by virtue of the fact that the suit is hard, metallic, robotic. The best example of successful live-action superhero costuming might be seen in the X-Men films. Here, brightly coloured spandex is swapped for dark leather which looks great and, importantly, moves well, despite Logan’s initial dismissal of the rack of jumpsuits. Spider-man likewise is pretty slick, if a little CG-friendly. Back in DC land, Watchmen too manages it admirably, with the current crop of heroes looking pretty cool while their predecessors, very cleverly, were clad in rather more home-spun costumes. Jonah Hex might have been a train wreck of a film but it looked pretty good, but then Hollywood has a long and glorious history of Westerns and, like the Joker in Batman and everyone in Heroes, the people in Jonah’s world just wear normal, if customised, clothes.

But what’s this got to do with The Cape and Young Justice? Well, Young Justice is better than The Cape in all respects, and is shaping up to be one of the best DC animated series in a long while. But visually, it is just so much better than The Cape. Superheroes just work in animation, which is perhaps not surprising given the ease of transition from static comic book pages to moving animated scenes. The inhabitants of the DCU, at least, have never looked better than in Justice League/Justice League Unlimited. Any impracticalities or craziness in superhero costume design that just fail in the real world fit perfectly into animation, just as they do on the comic book page. It’s the same when you’re reading prose superhero fiction – as a reader you’re in control of the action, and everything looks just tickety-boo. 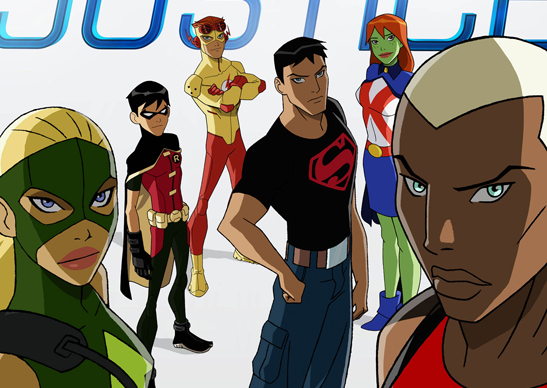 Unfortunately/fortunately (delete as applicable) I’d say The Cape is set for cancellation before the season is out. Hopefully Young Justice will settle in for a long run, but on the basis of the double-length pilot episode, its well deserved. Looks aren’t everything – far from it, in fact – but certainly The Cape is not a great example of live-action superhero design.

Now if NBC were looking for a circus-themed superhero, why didn’t they just commission a live-action series of Deadman?