Advertising at the End of the World

Excerpt:
Five years after her husband died, two years after she moved to a cabin in Montana, and six months after the world ended, Marie opened her curtains to discover her front garden overrun with roving, stumbling advertisements. Marie hadn’t seen one since she’d sold her condo and moved out to her isolated cabin. She shuddered.

There were at least twenty of the ads, and for all it seemed they were doing their damndest to step lightly, her red and yellow tulips were completely trampled. Marie had stubbornly continued to cultivate those flowers despite the certainty that she ought to be using the gardening space, and the captured rainwater, to grow food. Not that it mattered what she’d been growing there. It was all mud now.

The ad nearest her window looked quite a bit like a tall, lanky teenager. It moved like one as well, and might have fooled her except that its forehead was stuck in price scrolling mode. Faintly glowing red letters crawled across its forehead from right to left. 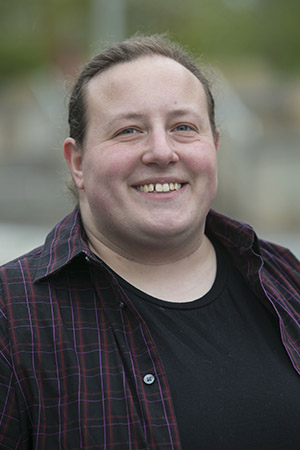 Keffy R. M. Kehrli is a speculative fiction writer who currently lives on Long Island, where he’s working on a PhD in Genetics. He attended Clarion UCSD in 2008 and since then, his fiction has appeared in magazines such as Lightspeed, Apex, and Uncanny. In 2015, he launched GlitterShip, a podcast featuring LGBTQ short fiction.

He is also a former editor of Shimmer Magazine.

Dani Cutler has been part of the podcasting community since 2006, hosting and producing her own podcast through 2013. She currently works for KWSS independent radio in Phoenix as their midday announcer, and also organizes a technology conference each year for Phoenix residents to connect with others in the podcast, video, and online community.