When We Went to See the End of the World

Mike offered Nick some pot. “That’s really something,” he said. “To have gone to the end of the world. Hey, Ruby, maybe we’ll talk to the travel agent about it.”

Nick took a deep drag and passed the joint to Jane. He felt pleased with himself about the way he had told the story. They had all been very impressed. That swollen red sun, that scuttling crab. The trip had cost more than a month in Japan, but it had been a good investment. He and Jane were the first in the neighborhood who had gone. That was important. 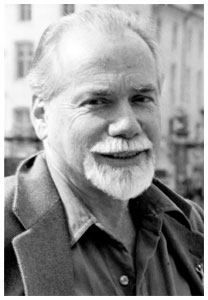 Robert Silverberg (born January 15, 1935) is an American author and editor, best known for writing science fiction. He is a multiple winner of both Hugo and Nebula Awards, a member of the Science Fiction and Fantasy Hall of Fame, and a Grand Master of SF. He is noted for having attended every Hugo Awards ceremony since the inaugural event in 1953.

J.C. began his career as a new media novelist, using strategies such as podcasting, social media and crowdsourcing to create and distribute his acclaimed 7th Son thriller novels. The years-long endeavor was successful: 7th Son: Descent was later published by St. Martin’s Press.