At exactly nine in the morning, Karen tapped the green box on her tablet screen and said, “Hello, my name is Karen. I’m listening.”

After a pause, a young woman said, “I’ve never done this before.”

“Okay,” said the young woman. “I uh…my landlord’s raising my rent again. And…I have two kids and I work two jobs and their father…he’s just never around, y’know?

There was another pause, and Karen knew the young woman was trying not to cry. Still, the tears came. “And I don’t know what to do about it. I usually ask my mother for help but she’s not doing so good herself…”

Karen leaned back in her chair and settled in for the call. Her cubicle was small, but comfortable. A small desk held her tablet on a stand that was connected to the wireless headset she wore every day. The floor she worked on was a sea of identical cubicles. Every morning, Karen would enter the lobby of the unmarked corporate high-rise with the rest of her co-workers at the Listening offices. No one stood out. No pink hair or hipster beards, no sexy dresses or flashy ties. The plainness of the employees’ appearance matched their demeanor. There were no wishes of good mornings or smiles of greeting. END_OF_DOCUMENT_TOKEN_TO_BE_REPLACED

I’m off my bunk and into my jodhpurs, knee-high leather boots and flight jacket the moment the long range air attack klaxons seep into my nightly dream about Caracara.

Muscle memory and Secret Service training kick in; I’m on auto-pilot (no pun intended) and a good ways down the hall buttoning up both sides of my leather jacket to the shoulder a full thirty seconds before I’m awake.

And just so you know, the ever so slight tremble in my hands and fingers is not fear. It’s adrenaline. I’m cranked and ready to put my foot all up in it.

A door to the right opens and Pierre-Alexandre falls in on my right flank, his steps brisk like mine. Our boots echo down the long hallway as we make our way from the underground bunker at Soldier Field to the bunker at Meigs Field.

What you think we got? he asks.

And yeah, I know. I’m going to hell for that.

END_OF_DOCUMENT_TOKEN_TO_BE_REPLACED

I’m off my bunk and into my jodhpurs, knee-high leather boots and flight jacket the moment the long range air attack klaxons seep into my nightly dream about Caracara.

Muscle memory and Secret Service training kick in; I’m on auto-pilot (no pun intended) and a good ways down the hall buttoning up both sides of my leather jacket to the shoulder a full thirty seconds before I’m awake.

And just so you know, the ever so slight tremble in my hands and fingers is not fear. It’s adrenaline. I’m cranked and ready to put my foot all up in it.

A door to the right opens and Pierre-Alexandre falls in on my right flank, his steps brisk like mine. Our boots echo down the long hallway as we make our way from the underground bunker at Soldier Field to the bunker at Meigs Field.

What you think we got? he asks.

And yeah, I know. I’m going to hell for that.

END_OF_DOCUMENT_TOKEN_TO_BE_REPLACED

Warning: the following book review contains explicit language, which is quoted directly from the novel. Reader discretion is advised.

I find most near-future-world-gone-mad stories hit-or-miss. Either they try too hard, or the characters are too flat, or the ideas are just too far out there (or not far out there enough). But occasionally I’ll find one that has the perfect mix of stuff I like.

With Super Sad True Love Story by Gary Shteyngart, I got lucky. 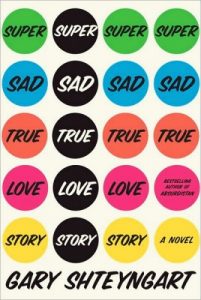 Super Sad True Love Story is a hilariously-scary near-future love story about a 39-year-old man named Lenny Abramov, clearly based at least in part on Shteyngart himself. The son of Jewish Russian immigrants who moved to New York before he was born, Lenny grew up with all the Russian pessimism, Jewish guilt, and immigrant pride that those folks were wont to do. Now he works for a multinational corporation’s Post Human Services division, selling life extensions to HNWIs (high net worth individuals). Our story begins with him finishing up a year in Italy, trying to make sales and failing spectacularly, living in a way considered dangerous by his coworkers (eating too many carbs, drinking too much wine), going to parties, and trying to figure out how he’s going to explain to his boss and close friend Joshie why he hasn’t hooked any clients.

At a party, Lenny runs into Eunice Park, spending time in Italy between her graduation from college and her entry into law school. Eunice, the daughter of Korean immigrants living in New Jersey, is very thin, very pretty, and very much a product of her environment. Lenny falls in love with her instantly, and through a strange confluence of circumstances manages to take her to bed.

Using first-person accounts from Lenny’s diary and Eunice’s GlobalTeens account (more on that shortly), the book then follows Lenny and Eunice as they separate and get back together, return to New York, and try to build a relationship.

From a science-fictional perspective, Super Sad True Love Story is the standard “America loses power while Europe and China grow in strength, America falls, America is rebuilt” story I’ve read in various short-stories and novels over the years. But where the novel shines is in the author’s uncanny predictions of the near future*. Here are some:

Money: The dollar is as devalued as the currency in current third-world nations, but most upper- or middle-class Americans use yuan, or “yuan-pegged dollars”, which are worth more. Right now, if I’m reading the news right, the dollar isn’t as well-respected globally as it used to be. Also, in the book, several nations are run by their largest companies — StatOil in Norway, HSBC in the UK (which is now called HSBC-London), Stability in Canada, and Petro in Russia. Mergers are rampant, too; Eunice’s bank is AlliedWasteCVSCitigroup, and LandOLakes also apparently has a financial wing.

Technology: Phones have been replaced by an umlaut-laden version of the word apparatus, “apparat”. People rarely speak (or “verbal”) to each other, preferring to use apparati to instantly find out about others. This is already happening; people on dates, trying to build relationships, would rather sit and stare at their phones than actually speak to each other. Apparati are also getting smaller and smaller, and are able to bring in more and more information; while cell phones have actually gotten slightly larger, the other half is already happening. (The book also has a very clever dig against iPhones in it.) Oh, and the sheer amount of information Lenny can get about Eunice as he flies back from Italy is staggering and scary — credit information, friends, photos, addresses, shopping trends…

Social Networking: Today, everyone and everything is on Facebook, and Facebook can suck in all your different social networks — Twitter, Foursquare, GetGlue, etc. In Super Sad True Love Story, everyone — adults, kids, professionals — uses a social network called GlobalTeens. Eunice happens to write long letters to her best friend Jenny, who lives in California (where Eunice used to live), and GlobalTeens keeps telling her that people don’t read anymore, that she should send image messages or video streams instead.

TV News: There are apparently only two 24-hour news channels, FoxLiberty-Prime and FoxLiberty-Ultra. Lenny’s parents watch these. Everyone else gets their news from media streams, which can come from anywhere, including Lenny’s friend Noah (who does a political stream) and Noah’s girlfriend Amy (who, despite being in perfect shape, runs the “Muffintop Hour”). This is sort of a riff on Current, and others who have YouTube or UStream shows.

Rating Everything: Walking through New York City, Lenny passes credit poles, which display his high rating (1520). Apparati can rank everyone in the room to see who the most desirable men and women are. Personality and fuckability are measured on a scale of 0 to 800. At Lenny’s office (a converted synagogue — actually kind of a cool image), an arrivals/departures train board shows what kind of mood everyone is in.

American Patriotism: In the novel, America is very much in decline. Poorly-spelled signs from the American Restoration Authority claim “Together We’ll Go Far” (the Wells Fargo slogan; I knew it sounded familiar) and various other vaguely-positive messages about change. Anti-immigrant sentiment is strong, and people who don’t look like “‘Murricans” (in the Fox News sense of the word) are grouped by metaphor or stereotype — Chinese people save, Latinos spend or have bad credit, and so on. As things get worse, roadblocks are set up throughout New York, plastered with signs saying that, by reading the sign, citizens deny the existence of the checkpoint while implying their consent to let the ARA do whatever it needs to do. And while the use of apparati is permitted on airplanes, the closest Lenny can get to JFK to meet Eunice’s plane is somewhere on the Van Wyck Expressway, at an ARA checkpoint patrolled by National Guardsmen with automatic weapons.

The novel is full of clever wordplay, prescient references, hilarious-while-being-vaguely-uncomfortable interactions between characters, and a scenario about the end of America that will frighten the hell out of you because it’s completely plausible. It’s also vaguely reminiscent of the way Muggle Britain was unaware of the war between Voldemort and the Order during HP6 and HP7. I really enjoyed reading it, and I got through it quickly — it’s an easy read, and I’ve always found humor to go faster than tragedy. I’d call this a satire more than anything else, but I think it also fits into sci-fi in the same way as films like Gattaca and Code 46**, and its exaggeration of what’s happening now echoes the “Would You Like To Know More” moments of Paul Verhoeven’s adaptation of Starship Troopers. I definitely recommend Super Sad True Love Story.

** A quick rant about “Code 46” — I really liked the film, and thought it was beautifully-shot with great sets and locations. It doesn’t have any cursing, and there’s no explicit violence, but it’s rated R. Why? Because in one scene, actress Samantha Morton is shown from the front with her bottom half completely uncovered. Meanwhile, films suffused with violence like “The Dark Knight” and “Batman Begins” are PG-13. What does it say about us as a culture that we’re more afraid of a one-second shot of the place that babies come from than our tweens and teens seeing a pencil jammed through a guy’s eye and the aforementioned guy stumbling around in pain for at least five times that long?