Artemis Rising returns to Escape Pod for its third year! This month-long event highlights science fiction by women and non-binary authors. We have five original stories this year that range in topics from biotech to far-flung A.I, virtual reality, and nanotech. 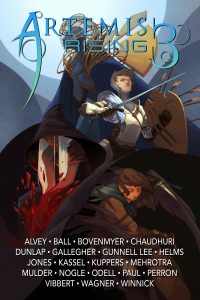 Dr. Mbalu and the Butcher’s Daughter

With a raspy pop, the cell sprayer in Rebecca’s hand sputtered one last drop of fur progenitor cells. Ignoring her stiff back, she leaned over the culture vat and daubed the cells onto the pink, gel-sculpted contours of a cheetah’s back muscles. The gel rippled; Rebecca held her breath as the reflexive shiver splashed the surrounding nutrient broth.

“Go in,” Rebecca whispered, her eyes hot and dry behind her goggles. Please, she prayed, conscious of the crucifix’s weight at her neck. Another reflex rippled the gel, as if the nerve matrix suddenly sensed the truth: It grew inside an old Gates Foundation lab trailer on the cheapest hook-up in Little Nairobi, rather than in the hide of an adult cheetah.

But the droplet disappeared slowly, the cells sinking into the gelatinous stew of serum and growth factors that—God willing—would ripen them into a furred skin.

END_OF_DOCUMENT_TOKEN_TO_BE_REPLACED

Dr. Thaddeus Begay had been expecting a dying child in the exam room, but no one had said anything about a woman half-dead from starvation. He stepped inside and muscled the door shut—like the rest of the clinic, it was made from metal reclaimed from the original dropship, and like everything else in the colony, it didn’t quite fit right.

“Hello there,” the woman said. Her tone was probably meant to be cheerful, but to Thad, it sounded like it took significant effort.

Thad frowned. His nurse must have made a mistake. A woman had burst into the clinic without an appointment, the nurse had said, demanding help for her sick child.

But the woman sitting on the examination table with her child was thin to the point of starvation. Cheeks deeply sunken; the outline of her ribs and collarbone sharp through her tank top. Her hair, like her shirt, was thin and plastered against her flesh with sweat. On her lap sat a little boy of about a year and a half, had jet-black hair and deep brown eyes, and cheeks that were flushed with a painful crimson rash. Still, he looked healthier than his mother.

Thad dragged a stool over to her. It squealed across the faint outlines of the struts and tie-downs and internal dividing walls that had once honeycombed the massive storage container that now served as the colony’s clinic.

He glanced back at the chart—her name was Suzanne Buenaventura. He glanced at her vitals, and nearly gagged when he saw her records from the colony ship. She’d been more than 215 pounds when the dropships had landed. Sitting on the exam table, she didn’t look like she’d top 110. “And what seems to be the problem this morning, Mrs. Buenaventura?”