Y’know, Halloween has always felt like the perfect time for storytelling. Whether it is ghost stories by the campfire, or Hammer horror from the comfort of your own living room (my personal preference), its just the perfectly obvious season for the supernatural and scarifying. While it has ever been thus for people like you and me, it seems to be catching on in the mainstream too. AMC’s zombie TV series The Walking Dead, based on the Eisner award-winning comic book series from Image, premiered to their biggest debut audience ever at 5.3 million viewers. Seasonal television is an American staple (perhaps less so here in the UK), with even series like the surreal college sitcom Community playing quite brilliantly with the zombie genre just a couple of days before.

Halloween also saw the launch of a new, free online podcast magazine and website, showcasing the best in genre short fiction. Dark Fiction Magazine is the brainchild of Sharon Ring and Del Lakin-Smith, two names familiar to the UK genre scene. Their stated aim is to produce a monthly short fiction podcast magazine, featuring at least four short stories in each issue focussed around a distinct theme.

In the spirit of ‘a rising tide lifts all boats’ (thanks for that, Mur!), we spoke to Sharon and Del about their new project and what people can expect. 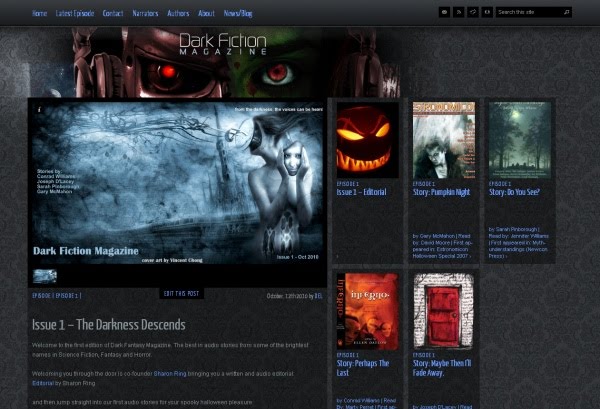 Escape Pod: Thanks for joining us! Let’s start with yourselves – what are your respective backgrounds, and what gave you the idea of starting Dark Fiction Magazine?

Del: I have been working in IT for over 15 years in one form or another and have either run or helped out on numerous websites, so I have my feet firmly in the cloud, so to speak. I’m also obsessed with music, audio engineering and genre.

I launched a podcast in February of last year called WordPunk which covers all sorts of geeky stuff like tech, genre, movies, etc. I had been looking for ways to expand it or cross pollinate with other non-audio based blogs. Sharon ran the idea of Dark Fiction Magazine by me and I was hooked.

Sharon: I got into book blogging a couple of years ago with Dark Fiction Review. From there I moved into working as a freelance editor, mostly on horror novels and short stories. Dark Fiction Magazine was an idea I’d had rattling around my head all summer. Turned out, talking to Del, he’d been thinking along the same lines. And that was it: the coolest partnership in podcasting history was born.

What made you want to make Dark Fiction Magazine a podcast instead of a regular, text-based website?

Podcasts have been around since late 1998, but it was not until 2005 that Apple included native support in iTunes, increasing their popularity massively. These days most people will listen to a podcast in some form, be that a BBC iPlayer Listen Again, an audio book or an internet radio station. So to us, this is the perfect growth medium to launch a short fiction site on. There are many text based short story magazines, and a few audio based ones too, but we saw an opportunity in the market to bring a curated monthly magazine offering high quality genre audio fiction to the masses.

How do you see Dark Fiction Magazine fitting into current landscape of podcasts and free audio fiction? Hugo-winners aside, the UK seems to be lagging a little in the area, with podcasting still dominated by US shows. In particular, free audio fiction in podcast form has been produced Stateside for a long while now – Escape Pod being just one example!

This is a very good question. Both in fandom and publishing, it is a very close knit community. And there are many passionate, selfless people all working together (and apart) to strengthen the community and industry.

When we looked at the current market, we felt that we could add value to the guys and gals already bringing fantastic audio fiction to us. We are UK-centric, certainly, more from circumstance than deliberation, which lets us offer something different and focus more on our audience. We still see ourselves as a global service bringing out stories from authors all over the world.

The liberating thing about being a free service is that the rules of competition and engagement are different. We are not stealing customers from others, as there are more than enough to go round and our service is similar enough to others that any new listener we get is also a potential listener for them. So we are trying to strike that difficult balance of differentiation enough to be intriguing, but not too much where we have nothing to compare ourselves to and align with.

What are your mid- and long-term goals for Dark Fiction Magazine?

To be honest we have been blown away by the positive responses we have had since launch and we are really pleased with how it is going. As for plans going forward, we aim to keep growing our range of stories, authors, narrators and artists while creating a valuable medium for new talent to launch themselves from.

We are also keen to partner with disability charities to ensure their customers get the best access to our free audio stories as possible and we are playing with the idea of expanding the platform into more cutting edge digital experiments. We are all about accessibility, so if there is a way to get great fiction out there, we hope to embrace it.

So, who exactly is Dark Fiction Magazine aimed at? As well as current fiction, will there be readings of old classics? And are you open to submissions or contributions?

Dark Fiction Magazine is for absolutely everyone who loves genre fiction. We’re not tied to one genre or sub-genre, so we’re able to podcast lots of content with broad appeal. Our target audience is anyone and everyone. We hope to get sci-fi readers tuning in to horror episodes; fantasy readers listening in to sci-fi. Too often people stick within their own little reading and listening niches. We’re after a wider audience than that. Good genre fiction knows no boundaries, and neither does Dark Fiction Magazine.

We’re interested in submissions from new and established writers but we would ask people to check out our submissions policy first to see whether their material is eligible for submission.

There may be some classic stories read in time. You’ll have to keep an ear out for future episodes to see which of your own favourites make an appearance!

Del and Sharon, thank-you very much!