Mur, Ben, and I are super pleased to say that Premee Mohamed is taking on a bigger role at the Pod: Co-Assistant Editor with Ben! Premee embodies the kind of fun science fiction that we love, and we know she’s going to do amazing in this new role.

Premee Mohamed is an Indo-Caribbean scientist and speculative fiction author based in Edmonton, Alberta.
She 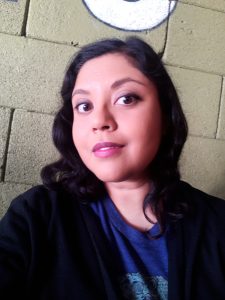 was a Capital City Press Featured Writer for 2019/2020 with the Edmonton Public Library. Her guest editing positions include novellas with Interstellar Flight Press and short fiction with Apparition Lit.

Her debut novel, ‘Beneath the Rising’ was a finalist for the Crawford Award, the Aurora Award, the British Fantasy Award, and the Locus Award. Her other published books include novel ‘A Broken Darkness’ and novellas ‘These Lifeless Things,’ ‘And What Can We Offer You Tonight,’ and ‘The Annual Migration of Clouds.’ Her next novel, ‘The Void Ascendant,’ is the final book in the Beneath the Rising trilogy and is due out in March 2022.

Her short fiction has appeared in print and audio venues including Analog, Escape Pod, Augur, Nightmare Magazine, Shoreline of Infinity, and PodCastle. Solicited appearances include The Deadlands, A Secret Guide to Fighting Elder Gods, and Jo Walton’s New Decameron. In 2017 she was nominated for the Pushcart Prize for her story ‘Willing’ (Third Flatiron Press).