They sent me to blow up the ship, which is a pretty dramatic way to inform an employee that her services are no longer required. On the other hand, it’s sort of my own fault because it didn’t occur to me to say no until after the interview at the recruiting station. Which makes me a good cautionary tale about not sleepwalking through your life, especially when your life involves being a deep-space ecological terrorist.

I suppose in my defense I could argue that I just sort of fell into sabotaging mining vessels and planting IEDs in the offices of PRE (Planetary Resource Extraction) Ltd.’s CEOs, in much the same way another person might fall into a career in accounting, or dressing up like a clown for kid’s parties. I knew a guy who knew a guy who knew a guy and, well, the whole story is pretty long and boring and mostly about networking. But it does kind of emphasize the whole ‘don’t sleepwalk through your life’ moral of this little Aesopian piece.

I have no idea when the words ‘Undercover Operative’ were stamped in my personnel file. I never even had a chance to lodge a complaint with my cell leader. It was just Snip! Snip! (The sound of my dreads being cut off) and in a matter of hours I was standing outside the recruitment station on moon A-OR-39625 of planet XZ9-5, trying and failing to psych myself up for my mission.

“Intergalactic whaling fleet,” I muttered to myself, “See the galaxy, meet interesting mythical creatures, and… save them.”

The concrete face of the recruiting station loomed over me and glowered. I gulped and clutched my ‘personal’ effects tighter.

Inside the recruiting office was an equally blocky, foreboding woman who loomed over me and never smiled once as she asked the questions necessary to join the deepspace equivalent of the now-defunct terrestrial French Foreign Legion.

“You kill anyone?” she demanded toward the end of the interview.

“Okay.” She made a sharp slash on the form she was filling out—recycled plasti-paper— and poked halfheartedly at the computer embedded in her desk.

“Jealous husband, wife, or other paramour?”

I shook my head. She narrowed her eyes at me.

“Skipping out on child support?”

She folded her sausage-sized fingers together.

“Well then, Satni Gleff, you seem to be just the sort of individual we’re looking for in our fleet. I have some forms for you to sign, but first let me extend to you my heartiest congratulations.” She extended a massive paw to me as well, and as she crushed the hell out of my hand with her iron grip, I smiled and smiled and smiled.

That was three decades ago (standard earth orbit measure) and since then I’d been mostly alone on a godforsaken ship in the godforsaken depths of the void, with nary a word of comfort or even contact from my cell leaders.

The stars made for very poor company, and deep space is a lot emptier than the human mind is really equipped to handle. The fleet was enormous, but against the immensity of the void, its size was a statistical error, and could be safely ignored. Our mission was to find and ‘harpoon’ the mythical space whale, but given how much of space is empty and that reports of the creatures were about as credible as ancient sailor’s tales of mermaids, our chances of success were vanishingly small.

It was a scientific expedition, of course. Wink wink, etcetera.

I hadn’t bothered with blowing up the ship up until this point in the story because, well, a) I was still on it, and b) it was so empty out there that I spent most of my time in coldsleep, and my ‘waking’ hours zoned out on the so-called ecstasy of the void or whatever.

It’s less thrilling than it sounds.

The five-hundred-seventy-ninth time I came up from coldsleep, rubbing my eyes with one hand and clutching my space-coffee with the other, the front of the ship took a hit that rocked it so violently I thought maybe I’d decided to blow it up after all and then forgot about it.

Coffee went everywhere, mostly all over me, and I hit the floor with enough force to white out my vision. Claxons sounded immediately, lights blared on in places that had sat in shadows for thirty years, and space cockroaches scrambled wildly for darker corners. I ignored them. Emergency instructions boomed from the speakers. I understood about one in five.

The captain came tearing up onto the deck, coldsleep falling from his shoulders like frost. The rest of the skeleton crew must have still been below, unconscious. Only the captain and myself, the official maintenance tech, had the ability to wake them.

I jabbed at the control panel as the captain staggered across the listing deck. With a clunk and whirr the viewscreen came online, a thin wash of shapes and light like an impressionist watercolor fading into view.

As the image resolved—mostly black—the captain leaned heavily on the control panel and stared up at the curving neo-glass.

It was the ship’s fault, of course. The navigation system had been designed and programmed to search the enormous emptiness for some sign, some evidence, of the mythical so-called space whale, and aim in the direction of the most statistically likely quadrant to contain something that fit the possible characteristics of the thing, the whatever-it-was.

But the whole “space whale” concept was a silly bit of self-delusion, a completely mythical and absurd fantasy with almost no possible basis in fact, just statistically improbable tales from spacefaring crewpeople who had spent way too much time in deep space.

It wasn’t supposed to actually exist.

The captain was gently pawing at his stubbly face with one hand, eyes wide and locked on the viewscreen. Frantically, I scrabbled at the gleaming panel, trying to make sense out of the images the ship’s sensors were throwing at us. I zoomed out.

Then I zoomed out some more.

There was a curve, on the viewscreen. A gentle curve, almost flat. And it was translucent. Glossy like glass, real glass, the kind our ancestors made with sand and fire, on ancient Earth.

Then the thing shifted, and it was solid, an immense plane stretching away from us, an endless surface blotting out stars, and wreaking havoc with our sensors and gravity generators, and moving holy shit it was moving.

The captain made a high pitched noise that in anyone else I would have classified as a whimper.

There was an eye.

It was the size of a planet. It was flat and glossy black, but inside was a spark, a light looking back. An intelligence? An engine of consciousness, burning like the heart of a star?

It was looking at us.

Space is, after all, pretty big. Fairly large, one might say. Immense, even. Vast. Catastrophically gigantic. Really goddamn huge. And it stood to reason, didn’t it, that any lifeform that might have evolved somehow in that incomprehensible void might, itself, be also really, really big.

“I think… we may have miscalculated slightly,” the captain whispered.

The…thing, the whale, the cosmic monstrosity that the faithful ship’s computer had searched for and located and steered us unerringly toward, had the gravity well of a planet. It was probably big enough to eat planets. It didn’t just dwarf our fleet, it rendered it irrelevant by sheer virtue of its existence.

Then it rolled again, and its opacity changed, as if it were flickering in and out of reality. The computer flashed urgent readings at us about dimensional shifts and the derangement of the fabric of spacetime, which was crumpling like a wire scaffolding in an earthquake.

It surged, down and down, below us, and I could see stars on the other side, I could see a vast plain, I saw sheets of black volcanic glass that must have been eyes, I saw thin layers of membranes like pages fluttering in a breeze, I saw myriad tessellations surging, I watched planes pass through themselves, I saw darkness become soft and light become cold and I was overwhelmed by the taste of salt and the memory of my bones shuddering outside of my body. And the wind in the trees.

The ship rocked in the gravitational backwash. I fell over. The captain fell over. Alarms blared, but strangely I felt no fear. A great sense of calm inexplicably overwhelmed me.

It was as if an enormous weight I hadn’t realized I was carrying was lifted from me, in that moment.

I didn’t have to blow up the ship.

We couldn’t possibly kill that thing.

It seemed as if we watched it for days. Maybe longer. Perhaps we did. Perhaps years went by, or centuries. But we survived, somehow. If it had wanted to, that thing could have destroyed us.

And afterward, we were left alone, blinking in the artificial light, in the black gulf and the silence.

The captain and I stared, blankly, at the empty viewscreen for a long while. Finally, I got to my feet.

The captain did not turn. Distantly, he said, “What?”

I waffled, then, waiting for his brain to come back online. Waiting for him to look at me, bark an order, demand that I stay, explain myself, etcetera.

He didn’t though. Just went on staring. I edged toward the corridor, crabwise, expecting every moment to hear his voice, ordering me back.

I had one foot over the threshold before he said anything, and when he did it was in a faint voice, not commanding but thready, and a little wistful.

“What are you going to do?” he asked, and honestly I have no idea to this day if he was even talking to me.
I said, “Find another line of work.”

“Okay,” I muttered under my breath.

I found the escape pods, and went home.

I had a lot to think about on the way there.

It’s a big universe, after all. And I had a lot of lost time to make up for.

Miranda Ciccone writes weird stuff, and jokes. Her short stories have appeared in The Harrow, The Three-Lobed Burning Eye, and Defenestration, among other publications. She lives in Columbus, Ohio. 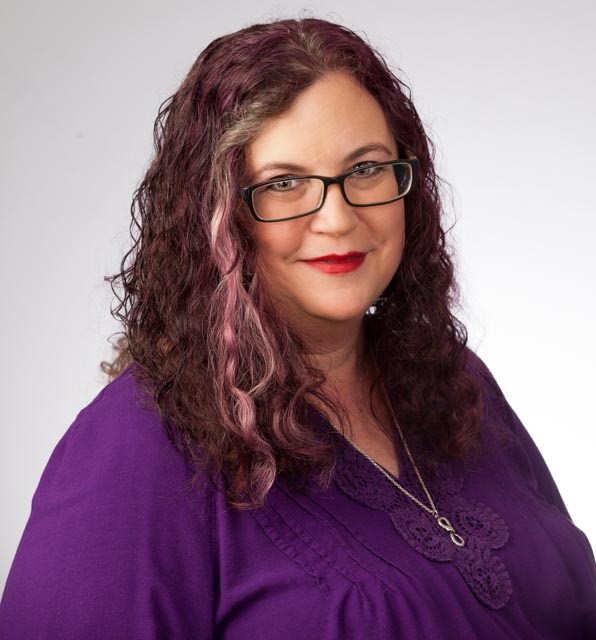 S. Kay Nash is a writer, editor, and occasional narrator. Raised by a cabal of university professors, anthropologists, and irritated librarians, she holds two degrees as magical wards to protect her from being hauled back into the ivory tower. Her short fiction has appeared in several anthologies including Road Kill: Texas Horror by Texas writers, volume 2.

She lives in Texas with a Mad Scientist and a peaceful contingent of cats and dogs. You can find her on Twitter @Gnashchick.