A Most Elegant Solution

I can’t even tell the others apart now. I know that inside those vaguely undulating metal cocoons are the bodies of the rest of my team—Marshall, Cherie, Gem and Abdul. Which squirming ovoid contains whom—there’s no way to tell.

And I’m about to join them. The swarm has already engulfed my legs. I can’t feel anything below the knee, which is a kind of relief. Devoured by my own creations is a terrible enough way to die—at least it probably won’t hurt.

I know I should be mourning the others, or desperately trying to save myself, but I don’t feel anything like that now. Maybe this is a side effect of the paralysis, maybe it’s not just a physical but an emotional anesthesia. Because all I can think about is how I got here. How we all got to be here, lying on the floor of our brand new habitation buildings, smothered by tiny robots.

Abdul joked about grey goo, right from the beginning. We’d been living and working together in the lab on Earth for a year before we left, one of several teams preparing for the trip. None of us knew which team would be chosen to be the first, so we all prepared. Working with the bots was a core competency for everyone, since they were the lynchpin of the plan to make Mars habitable. But everyone knew that they were really mine. Betsy’s bots, they called them. Except, of course, when Abdul was imagining them taking over the universe.

“That’s not funny,” Gem said. We were all scientists, so none of us were superstitious, exactly, but Gem never liked to hear talk of things going wrong. They always turned the conversation back to how to prevent disaster, instead of how to react to it.

Gem was a glass half full kind of person.

“That’s where you’re wrong,” Abdul said, winking at Gem. They’d been flirting since day one and we all knew they’d probably end up a couple, whether it was on Earth or on Mars. “It’s hilarious.”

When the tiny bio-engineered bots had barely filled a Petri dish and were sprouting adorable models of habitation, sanitation and manufacturing facilities, it was kind of funny.

When we’d been on Mars for two months, living and working in the full-size versions of their creations, but they kept on replicating regardless of our programming, it stopped being amusing.

It’s not as if none of us could have predicted the bots swarming and developing a plan of their own. We all thought about it, Abdul’s jokes were just the most obvious way to describe the concern. Everything is a trade-off, and at the time it seemed like a reasonable risk in return for the things they could do for us.

Now, as they make their way up my legs, I think I honestly couldn’t have done anything differently to prevent this outcome. But I do wonder if we should have spent more time planning for the worst-case scenario. I wonder if Gem, in their shimmering living coffin, had thought about that in the end.

Marshall visibly shuddered as I let the bots crawl over my hand. They didn’t really behave like insects and they definitely didn’t feel like insects. They were silky, almost warm, especially after a long stint in the desert in my suit. Thermoregulation in a suit is never right.

“It feels nice,” I said, holding my hand out to him. He made a face and disappeared into his hydroponics lab. Marshall was always happier dealing with things that grew rather than things we built. He said he’d take evolution over engineering any day.

I chuckled and watched as a small cluster of bots gathered in my palm for a fraction of a second, then splintered off like a flock of birds disbursing. It was oddly beautiful.

We were still in our prefab shelter then, the modular building serving all our needs, albeit barely. I was just about finished with the final programming to let our bots loose, to let them begin building us a permanent home, using the elements already extant on Mars to create a form of protection from those selfsame elements. It was an elegant solution to an ugly problem, and I couldn’t wait to see what they would devise.

I admit that I anthropomorphized them. Not individually, of course. I didn’t come up with thousands of names or anything, but I thought of them as alive. Like working animals, maybe.

When I thought I was alone, I talked to them. After a while, I didn’t care if I was alone or not.

It bothered Cherie. She took me aside one night after we’d all kicked back with a movie and asked if I was okay.

“Are you asking me as a friend or as my boss?” The five of us were a proper team, hashing out issues collectively, but there had to be someone with whom the buck stopped. A mission lead who, when the shit starts hitting the fan, could make a decision and know that we’d all carry it out, no questions asked. That was Cherie.

A shadow crossed her face as if my question hurt her or maybe I was just imagining that. Projecting.

I couldn’t help but smile.

“Yeah, I’m okay,” I said. “It’s mostly rubber ducking. Look, I don’t really believe they understand me or anything.” I laughed. “They’re way too small for verbal language processors.”

She nodded, but I could tell she was still concerned. Rightly so, probably.

I’m not talking to them now.

I’ve never been claustrophobic—none of us could be in this job—but I think it’s instinctual to be terrified of being smothered, buried alive. And yet…

They’ve got my hands now and the only thing I can still move is my head. I ought to be screaming, out of my mind in fear. But I’ve got a deep-down body calm instead. The bots are highly adaptable, able to fabricate all manner of compounds. The part of me that still feels things is inordinately proud that they have figured out how to control our bodies and minds as they do whatever it is they are doing. Breaking us down for constituent elements, I presume.

Amazingly, even that thought doesn’t repulse me. They have done an excellent job.

The first habitation they built was impressive, though more for the proof of concept than for the structure itself: It had four walls and a roof, with airlocks and shielding in all the right places, but that was about it. It was functional.

“It sure beats the prefab, though,” Gem said, stretching their arms high above their head and utterly failing to reach the ceiling.

I couldn’t keep the grin off my face. “It sure as shit beats the prefab,” I said, not bothering to conceal the pride in my voice, “and that prefab wasn’t the designer’s first try out of the gate. This is.” I ran my hands over the smooth walls, extruded by my bots after their own design. “And the next one will be even better.”

“How do you know?” Cherie asked.

The next buildings they fashioned were better, and one ones after that better still. It was becoming almost comfortable on Mars. Not really, of course, we still needed airlocks and suits and we were drinking recycled urine, but it was better.

It wasn’t just the buildings though. They were better. The bots themselves.

Adaptation. It’s a survival mechanism in organic life, a result of the drive to continue being. Of course, it never occurred to me that it could work in reverse—that the programmed nature of my bots to adapt would lead to them possessing a drive to survive. I can only assume that’s what’s happened. I programmed them to do whatever they had to in order to make a habitable environment for us humans, but I guess the purpose got lost, mutated by the very adaptability that made them useful to us in the first place.

Maybe it’s only fair that we are now becoming useful to them.

My sarcophagus encloses me completely now. I can see nothing, feel very little on my skin. Even my breathing and my heart rate seem to be slowing, but there’s still no panic, none of that survival instinct left in me.

But my only wish is that I could live to see what my children will become.

The voice comes to me as if from a long distance, and it’s familiar and comforting, even though I can’t identify it.

“She’s coming around; give her some space.”

There’s a rustling and I become aware of light. I can see, though I can’t seem to open my eyes. The light becomes stronger and shapes coalesce in my vision and I realize that what I can’t do is close my eyes. I can’t blink.

The strangest part is that it feels completely normal.

I try to take a deep breath but there’s no fullness in my lungs, no weight to the air, only the incongruous taste of seltzer in my mouth. I don’t even feel my chest expanding. I guess I’m not breathing anymore, either. Am I dead, yet somehow still aware? That doesn’t seem plausible.

The shapes around me firm up and I recognize Cherie. Only, I don’t recognize her at all. Her long hair is gone—not cut short but completely absent—and her skin is a covered in a black, scaly coating.

“Betsy,” she says, her voice the only thing that seems close to my memory of her, “how do you feel?”

I think about the question. I remember the bots engulfing me, suffocating me, devouring me. But I haven’t been deconstructed for my useful components after all.

Quite the opposite. I’m whole. More than whole — I am more. I can see infrared, taste radiation. I’ve been augmented. Improved.

Something like a smile appears on Cherie’s face and she helps me up. We are still in the main habitation building, where I’d found the others being swarmed by the bots. The airlock opens—no, it’s not an airlock anymore. It’s a door. An Earth-style single door, through which Abdul enters. He’s not wearing a suit. He’s not wearing anything. Looking down at my own body, I see that the black scales are part of us. A kind of permanent suit, I suppose.

“Betsy—I’m glad to see you finally decided to join us.”

“The… others?” I ask, still unsure how to work my new voice.

“Everyone is awake, we are all fine,” Abdul says, then his obsidian face slips into a grin. “Better than fine. Though, I have to say, this is going be awfully hard to explain to NASA.”

“You did a good job, Betsy. Too good, maybe. You programmed your bots to do whatever it took to make Mars a feasible place for us to live. And they did. They found a most elegant solution. They didn’t change Mars to suit us. They changed us to suit Mars.” 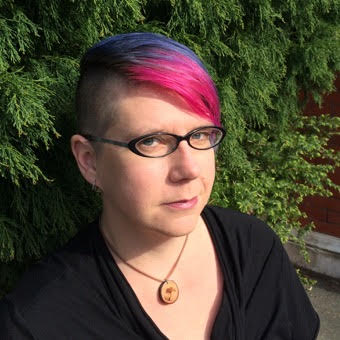 M. Darusha Wehm is the Nebula Award-nominated and Sir Julius Vogel Award winning author of the interactive fiction game The Martian Job, as well as thirteen novels, several poems, and many short stories. Originally from Canada, Darusha lives in Wellington, New Zealand after spending several years sailing the Pacific. They tweet @darusha and their website is darusha.ca. 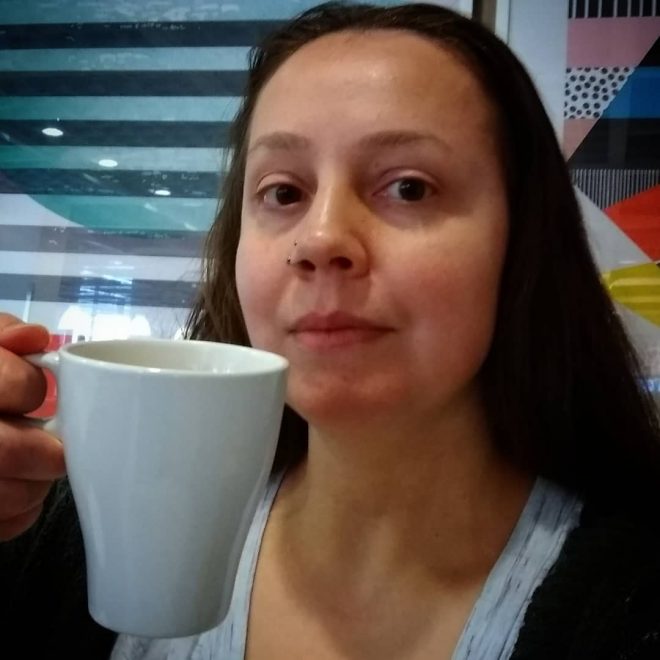 Abra Staffin-Wiebe loves optimistic science fiction, cheerful horror, and dark fantasy. Dozens of her short stories have appeared at publications including Tor.com, F&SF, Escape Pod, and Odyssey Magazine. She lives in Minneapolis, where she wrangles her children, pets, and the mad scientist she keeps in the attic. When not writing or wrangling, she collects folk tales and photographs whatever stands still long enough to allow it. Her most recent book, The Unkindness of Ravens, is an epic fantasy coming-of-age novella about trickster gods and favors owed. Enjoy an excerpt here: http://www.aswiebe.com/moreunkindness.html