Christopher L. Bennett has written some great Star Trek tie-in novels — Orion’s Hounds and Over a Torrent Sea in the Titan series, and The Buried Age, a pre-TNG book. Even Ex Machina was pretty good, if a little clunky in places. But I figured, okay, I liked those books, so I’ll probably like his first non-tie-in novel, right?

Well, I did. Mostly. 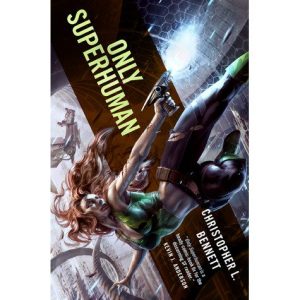 Only Superhuman, Bennett’s first original novel, is a near-future story — it’s set in the early 2100s — about “modified” humans (either by technology or genetics) that have become a group of superheroes, protecting the spaceways from lawbreakers and rescuing people in need. This group, the Troubleshooters, is led by Sensei Villareal, and includes the book’s main character, Emerald Blair, aka the Green Blaze.

Now let me stop right here and tell you that Emerald — Emry, as she goes by — has a very curvy figure. Like, exceedingly. She’s strong and fast and intelligent, but the book spends an awful lot of time focused on her body, as well as her sexual exploits. I’m no prude, and yes, I understand the point Bennett was trying to make — that in the 2100s our puritanical American sexual mores will be a thing of the distant past — but it was distracting. There were shower scenes, sex scenes, and even a scene where Emry has to escape the bad guys while wearing only her panties.

The book clearly is influenced by comics and graphic novels; there’s monologuing, long soliloquies delivered in such a way that you might read a bunch of text boxes on a full-page panel, action and adventure, and funny moments, as well as asides where we enter the POV of different characters who aren’t Emry. There are even flashbacks — origin stories — for Emry and some of her friends, including the period when Emry was a bad guy, and her formative years. So I get it: in a lot of superhero comics and graphic novels, the female characters are curvaceous and dressed in revealing clothing. Not all of them, but I’ve read my share. I’m pretty sure Bennett was trying to hang a lampshade on that aspect of comics, but it didn’t quite work out the way I think he hoped. At least, not in my eyes.

Getting back to the story at hand: the main antagonist to the Troubleshooters is the Vanguard colony, led by Eliot Thorne, who once tried to create superhumans but it didn’t quite go as planned. When a corporation takes over the Troubleshooters from Sensei Villareal, its figurehead, Greg Tai, sends Emry to infiltrate the Vanguardians, to stop them from uniting the modified people of the solar system and going up against the unmodified people of Earth (who aren’t huge fans of modified people they can’t control). Emry does as ordered, only to find that the Vanguardians aren’t quite what Tai said they were.

Along the way, Emry also falls in love, has a fair amount of sex, gets into fights, quips with her spaceship/sidekick via encrypted subvocalized tightbeam, and eventually discovers the true villain of the piece. There’s the expected battle sequence (which was a little confusing to follow), and then a denouement.

Let me say this up-front: this book was mostly fun to read, once you get past the long-paragraph infodumps. Emry is a likeable character, and the villains are sufficiently nuanced also. The supporting characters are an eclectic, multicultural bunch, and unlike a lot of superhero teams I’ve seen, they include several Indian characters, as well as a woman in a full hijab. The reader is kept just a couple of steps ahead of Emry, so that we know what’s coming but not so soon that we think Emry’s an idiot for not seeing it, and even the sex scenes that I was complaining about before aren’t gratuitous — they fit Emry’s motivations and characterization.

Did I like the book? For the most part, yes. Would I have done it differently? Maybe a little. But it’s not my superhero novel; it’s Bennett’s. If you like his style of writing, or you like superhero stories that don’t spend an inordinate amount of time on origins, or you like books with action in them, then you’d probably like this one. But you might have to skim past the infodumps and the descriptions of Emry’s appearance, at least in the beginning, or else you could find yourself wondering why you started the book in the first place. It’s not Kushiel’s Dart-level of infodumpage, but there’s a fair bit that the reader needs to understand Emry’s world.

Or, I mean, if you’ve read Leviathan Wakes you probably already have a general idea. Either way.

Note to Parents: This book is rated R for sexual content. There’s some violence, but it’s not graphic. I think older teens could handle it, if they’re mature enough to not giggle and blush every time they see someone having sex, but otherwise I’d send them elsewhere. Of course, you should use your own best judgment when it comes to your kids.

About the Reviewer: Josh Roseman (not the trombonist; the other one) lives in Georgia and makes internets for a living. He has been published in Asimov’s, Escape Pod, and the Crossed Genres anthology Fat Girl in a Strange Land, among others, and in 2015 he released his first short fiction collection, The Clockwork Russian and Other Stories. When not writing, he mostly complains that he’s not writing. Find him online at roseplusman.com, or on Twitter @listener42.