Here’s another one: “it was pretty good.” 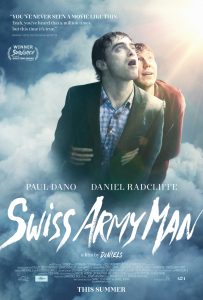 At its core, Swiss Army Man is a buddy comedy. Paul Dano plays Hank, a guy who is lonely and can’t seem to connect with anyone, so he charters a boat — which then sinks in a storm, stranding him on a tiny island in the Pacific Ocean. Daniel Radcliffe plays Manny, a corpse that washes up on the beach of said island. Except that Manny’s corpse has super-powers that Hank can use to help them both reach civilization once again. Meanwhile, Mary Elizabeth Winstead plays Sarah, a girl Hank and Manny both have a crush on.

If you can stick with this film past the first fifteen minutes, which are pretty much all fart jokes, it becomes almost something else entirely as Manny’s corpse begins to develop its abilities. He starts simply with his fart powers (and through the movie there are several shots of Radcliffe’s butt), but eventually gains the ability to use the other three elements: fire (he makes sparks), water (he collects rainwater and regurgitates it), and earth (he can break things). He also has other abilities which the viewer discovers later on, some of which haven’t been spoiled by the trailers.

And as Manny develops his powers, he becomes more “alive”, learning about the world and his feelings even as he and Hank make their way through the forest and back to the civilized world. Hank, not knowing what to do with this information, creates elaborate life-sized dioramas (it’s the only way I can think of to describe them) to help Manny understand the things he’s experiencing and feeling.

Here’s the thing about movies like this, though: you never know if it’s really happening, or if it’s all in the character’s head, because it’s just Hank and Manny. Some of what Hank pulls off stretches the limits of belief, no matter how cool it looks. I won’t tell you if it’s all in Hank’s head or not, but I will tell you that the film makes it very clear what the answer is by the time you reach the end.

I can’t figure out how much the movie cost to make, but it seems like a very small film, scope-wise. Paul Dano and Daniel Radcliffe performed most of the music in the film (including several renditions of “Cotton Eye Joe”), and Radcliffe refused to use a dummy version of Manny except where it was too dangerous for him to actually perform a stunt. The film premiered at Sundance, where it was nominated for the Grand Jury Prize and won the directing award in the “dramatic” category. The directors themselves (collectively known as “Daniels”) started out doing music videos (they’re best known for the video for “Turn Down for What”), so they come from a world where you have to make every shot count because you only have a few minutes to tell an entire story.

The film itself was pretty divisive even at Sundance — according to Variety, people kept getting up and walking out. I understand that — it’s hard to make high art out of farts, erections, and masturbation discussions, and when you do, people who are used to more highfalutin ideas can’t deal with things that don’t conform to their standards. But here’s the thing: the movie is hilarious in places, depressing in others, and if you just accept the fact that it’s only an hour and a half long, by the time you get to the climactic fart joke you’ll have forgotten why you had any objections to the film in the first place.

I saw this film with a friend of mine who I’ve known for 32 years, and when it was over we both didn’t really know what to say about it. I mean, I kept thinking about it, but what was there to talk about? There was only one real mystery left by the time the movie ended, and the solution to it ultimately didn’t even matter. Sure, I’m curious, but it’s not that important in the grand scheme of things. What is important is that, in the end, Hank — standing in for the depressed, lonely members of the audience — shows us that even the smallest gestures can have the biggest impact. Even if that impact is on a corpse.

I liked this movie.

Josh Roseman (not the trombonist; the other one) lives in Georgia and makes internets for a living. He has been published in — among others — Asimov’s, Escape Pod, and Evil Girlfriend Media, and is forthcoming (or has been released) in 2016 from Abstract Jam, Stupefying Stories, and The Overcast. In 2015, he released his first collection, The Clockwork Russian and Other Stories. When not writing, he mostly complains that he’s not writing. Find him online at roseplusman.com, or on Twitter @listener42.