Marietta (the one in Georgia) isn’t a small town. Not anymore. In fact, if you live in an unincorporated part of northeastern Cobb county, you pretty much live in Marietta, even if you’re not paying city taxes or using city services. It’s become part of the sprawl that is Atlanta; it’s the next city northwest as you head up the highway.

The thing is, it wasn’t always like that. Fifty years ago, Marietta really was a small town, and the thing about small towns is that you can hide a lot of big secrets there. Marvin Hill has been hiding a huge one: for more than fifty years, Marvin’s been “cleaning up” his town, one vagrant and hoodlum at a time. 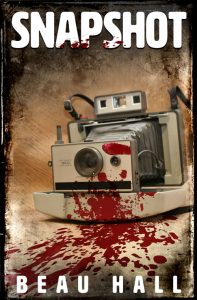 Another longtime resident of Marietta, Mary Frances, discovered some years ago that Marvin was killing people and made a deal: if she could take photographs of the murders, she wouldn’t turn him in to the police. Mary, a skilled photographer, made art out of daily life, distilling it down into snapshot-style photos taken around Marietta for decades. She would do a series on vagrants asking for money, on people arguing, even on shoppers walking down the street. And every now and then, she’d do a series on Marvin, killing someone he thought was undesirable.

Until she got a taste of the murder bug and made him start killing people she had a problem with.

One summer day in Marietta, Marvin’s granddaughter Kate happens by his house on the way to work, just as he’s finishing burying yet another body in his yard. That’s the final straw for Marvin, who confronts Mary, telling her that he’s had enough, that he’s not doing this anymore. Mary, though, has her own troubles: she’s being evicted from her senior living center, she can’t afford to pay the upkeep on her storage unit (where all the murder photos are kept), and, perhaps worst of all, she has plenty more people she wants Marvin to kill for her.

Marvin has another idea to solve his problems, though: he can just kill Mary and be done with her. Or so he thinks, because almost immediately after he does the deed, her ghost joins the others following him around, and hers is much more powerful than any ghost he’s faced to this day. All she wants is recognition for her work, and all Marvin wants is to stop killing.

But it’s never that simple.

I’ve been a part of the workshop process for this novel, taking it from true-crime to horror, from print to graphic novel and back again, and through at least three iterations prior to this publication. In all of them, the thing that shone out most was Hall’s talent for giving gruesome, gory details without seeming like he’s doing it gratuitously. That ability extends further, into the telling of the story; it’s full of graphic, vivid descriptive imagery, both of the setting and the characters’ emotional states — all of which are messed up in one way or another. Also, as a lifelong Atlanta resident, Hall has captured the small-town-stuck-in-a-big-town feel of downtown Marietta: the square, the houses nearby, and even the weather. I’ve walked past The Camera Shoppe before (that’s not it’s real name); I’ve seen houses like Marvin’s and condo buildings like the one where Marvin’s son and granddaughter live. I know people like Ron (Kate’s boss) and Jeremy (who runs the storage facility), and I certainly know people like Kate, Ron’s granddaughter: big-world people stuck in a small town after having a taste of the cosmopolitan life. Hall brings all of this to the reader without slowing the pacing or making it boring.

While the mystery — and the accompanying ghosts — unfold neatly, the story seems to wrap up a little quickly, and the second-to-last confrontation is pretty well mapped-out before the reader even gets there (although the characterization of the person facing Marvin in it is excellent — he thinks he’s smarter than the killer because he’s watched a lot of cop shows). I wasn’t quite expecting the resolution, but the Chekhov’s gun was made very clear several times in the story. I might have appreciated one more chapter between the climax and the resolution — something that would’ve shown us how the surviving characters start to move on before we see how they did it in the final chapter. For a book that takes place in the south, I only counted two non-white characters with speaking roles, but I am pretty sure the book passes the Bechdel test, if only by a small margin. Finally, there are a few areas that dragged for me — most notably the part with the cops, although that’s offset by the almost-cartoonish-but-still-realistic reactions from Ron and the creeping dread from Kate, which are peppered in enough to keep me from getting bored.

This book reads fast; my e-reader says only two-and-a-half hours. It’s hard to keep a small-town book moving quickly because of the normal pace of such places, but when you plunk the small town down in the middle of the big city, it naturally moves a little quicker. There’s humor to string you along when the plot needs time to develop, and the descriptions are always worth savoring. As far as the ghost angle goes: the supernatural angle is consistent, and that’s probably the most important part. 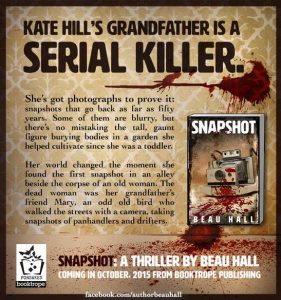 It’s really cool to see a book come together, from idea (in the writing group we used to be a part of, Hall explained how he came up with the story) to outline, from draft to draft, and into a book that people can actually purchase and read. Fans of horror will like this one, and fans of small-town stories who can handle the gorier aspects will appreciate the telling of the tale.

Snapshot is available at Amazon. We received a review copy in advance of publication. Images are from the author’s Facebook page. Also, in the spirit of full disclosure, the novelist and the author of this review are friends.

Note to Parents: This is a ghost story and murder mystery. There is adult language and explicit violence. The book should not be read by minors. Of course, you should use your own best judgment when it comes to your children.