Tim Russ is probably best known for his role as Tuvok on Star Trek: Voyager. However, since the end of that series, he’s devoted his time to producing fan films that extend the story of Star Trek independent of both the reboot and novel universes. His first foray, Of Gods and Men, shows us what might have happened in the Mirror Universe after Kirk Prime tried to convince Mirror Spock to change things for the better.

His second, Star Trek: Renegades, is intended to be a pilot for a new fan series about a crew of… well… renegades.

I just wish it had lived up to my expectations. 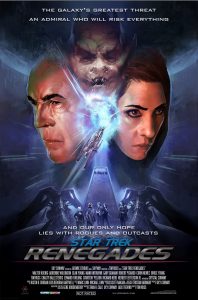 In 2388, a new threat to the Federation — the Syphon — is destroying dilithium-producing planets, and it seems like nothing can stop them. A male-dominated militaristic society similar to the Klingons, no one knows what they’re after, other than causing chaos and disorder — and also messing up the Federation’s fuel sources. Admiral Pavel Chekov, in command of Starfleet Security, tasks Commander Tuvok (the new head of Section 31) to find and stop the Syphon threat.

Tuvok, always resourceful, has a crew of renegades at his disposal. Their captain, Lexxa Singh, is in prison, but he breaks her out and reunites her with her team before sending her on her way. Meanwhile, back on Earth, Chekov brings in his own rogue agents to pin down the source of the Syphon threat itself.

Renegades stars Adrienne Wilkinson (Xena) as Lexxa Singh, the leader of the renegade starship, the Icarus. Her history is muddled — she’s some sort of augment, and her mother was wanted by the Federation, and she has additional strength and speed similar to the Khan-style genotype. While good in the fight scenes, Wilkinson looks tired most of the time, not sharp and hard, although this is the first episode, so she has as much room to improve as any other.

The other main star is Walter Koenig, and he needs no introduction. And of course Tim Russ reprises his role as Tuvok.

The rest of the cast is comprised of big names, Trek veterans, and relative newcomers. The Icarus crew includes Sean Young (Ace Ventura), Edward Furlong (Terminator 2), and Gary Graham (Soval on Enterprise). Manu Intiraymi reprises his Voyager role of Icheb, and is joined by Chasty Ballesteros (The Newsroom) and new crewmembers portrayed by Larissa Gomes (Saw 6) and Courtney Peldon (Harry and the Hendersons the series). Back on Earth, we have Herbert Jefferson Jr (Battlestar Galactica) in a brief cameo, as well as Grant Imahara (Mythbusters) in yet another Trek fan production. There’s also the crew of the Archer, a ship in pursuit of the Icarus, led by Corin Nemec (SG-1) as Captain Alvarez, and there’s Robert Picardo (Voyager) as Lewis Zimmerman. And then there’s Bruce Young (The Sentinel) as the Syphon leader Borrada.

What do I think of the cast? I think they’re okay. Sean Young’s Doc Lucien probably has the biggest chunk of story outside of Lexxa herself, but her voice is somewhat whiny and not strong enough to support the character. I didn’t recognize Furlong as the engineer “Fixer”, but if the show continues I think he’ll be interesting. Ballesteros’s Ronara has some potential, but I was prejudiced against both her and Icheb because of the clunky exposition they were treated to in the first act. Russ and Koenig are good, as usual, although Russ is starting to show his age, as is Richard Herd, reprising his role as Admiral Paris.

Overall I really didn’t think the writing on this show was as good as Russ’s previous production. The writers (Ethan Calk, Sky Conway, and Jack Trevino) are the same, so I’m not sure what happened. The story hit all the necessary beats, but none of them were really a surprise, except for a few of the deaths that were somewhat unexpected, and the little coda between Chekov and Tuvok. The problem was that we had to extend our brains past the end of Voyager, meet all these new characters, and somehow care about all of them. And there are a lot. I guess I could care about Singh, given time, but her motivations aren’t anything I haven’t seen (or written myself) before. Shree’s hacking scenes were pretty blah, and the villains’ speeches and actions (both the Syphon and the mastermind behind them) weren’t new either. Oh, and why would the Syphon put the Highlander 2 shield around Earth instead of just destroying it, since they clearly have the power to do the latter? Too much narrative convenience for me.

Russ is a capable director, but the production design I feel limited him in ways I didn’t see in his previous productions — or even in much lower-budget fan productions, such as the Hidden Frontier series. It was especially evident in the bridge scenes (on both the Icarus and the Archer), as well as the Syphon planetary sequences — both when the crew is sneaking around and when some of them get captured. Everything felt small to me, and there’s only so much a director can do with handheld camera work (of which there was a lot).

As per usual in Trek fan films, the special effects and props were very good. I especially enjoyed the logical progression of Federation technology and Icheb’s Borg implants, and (other than the stupid skull-and-crossbones) the design of the Icarus. I had mixed feelings on the updated uniforms, which seemed a little too much of an attempt to call back to the original series. The music, by Justin R. Durban, was passable, though not spectacular. I didn’t catch a theme running through it — that was left to the poem “Invictus”, which is what drives Lexxa. I could totally buy a future opening sequence with her voice-over of the last few lines of the poem, but I need some sort of theme. Every other fan presentation I’ve seen has had a theme, and that’s definitely missing.

So… on balance, this was cool, but I wanted more. I wanted better. If a bunch of amateurs (no offense, Rob Caves and team) can pull off more than ten years of fan films with nothing but green screens and their own money, and if we can have two great continuations of the original series, then I think someone with the talent of Tim Russ should be able to give us something at least that all-around good. I’ll watch Renegades if it becomes a series, because I think it has the potential to be better, but if this was just a film and there wasn’t going to be anything more, I’d be more disappointed.

Star Trek: Renegades can be viewed for free on YouTube.

Note to Parents: This film contains violence (both physical and sci-fi), mild language, one almost-sexy scene, and at least two references to non-consensual sex. I’d probably still only rate it PG based upon what’s rated PG these days. Of course, you should use your own best judgment when it comes to your children.