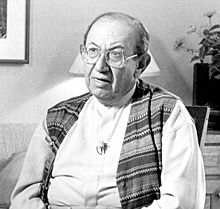 Daniel Keyes (August 9, 1927 – June 15, 2014) was an American writer who wrote the novel Flowers for Algernon. Keyes was given the Author Emeritus honor by the Science Fiction and Fantasy Writers of America in 2000.[1]

Flowers for Algernon is a science fiction short story and subsequent novel written by Daniel Keyes. The short story, written in 1958 and first published in the April 1959 issue of The Magazine of Fantasy & Science Fiction, won the Hugo Award for Best Short Story in 1960. The novel was published in 1966 and was joint winner of that year’s Nebula Award for Best Novel (with Babel-17).

Dave Thompson aka the Easter Werewolf aka the California King is still uncomfortable with the notion of pumpkin beer, but don’t hold that against him. He lives outside Los Angeles with his wife and three children. Together with co-editor Anna Schwind, he ran PodCastle for five years, stepping down to focus on his own writing in 2015. You can find two of his audiobook narrations on Amazon: Norse Code by Greg Van Eekhout and Briarpatch by Tim Pratt. Dave is an Escape Artists’ Worldwalker and Storyteller, having been published in, and narrated for, all four EA podcasts.