There are three thousand people in the world, and we are all the same.

I don’t mean equal, for The Book makes clear we are not in any way equal. Some of us are blessed, others unblessed, as some live in the temple and others live on the charred black surface. And I do not mean we are similar, like sheep – the term once used, I believe, for a world of people with different genetic coding but the same ideas. No, we are not “sheep.” We are the same, from our hair to our DNA.

The Book tells us that once there was The First, long ago, before the war. It tells us that She was not strong but lucky. Hospitalized for a broken leg before the bombs were released, all at once, across the world, or so The Book proclaims. The hospital was underground, hidden from the fallout’s worst. Most of the building caved in with the force of incessant blasts, everything destroyed but one wing: Hers. Our temple.

Inside the room with Her, Her sister Marna had been visiting. Sister Marna, a scientist skilled in genetic replication, was older than The First, who had seen only twenty years. Sister Marna nursed The First back to health in that room, mended Her wounded bones. They ate Jello from sealed plastic containers and cans of beans and the petals of roses left by loved ones they learned to forget. They did not know they were the last.

But they knew they should not leave the hospital wing, for the one time Sister Marna pushed open the door to the surface, she found the way blocked by rubble, saw a hazy light falling from the cracked concrete above. She and The First remained inside until the food ran out.

They waited three days, our three Days of Fast, while Sister Marna searched for an exit, and on the third day, the Day of Sustenance, Sister Marna found another door, unblocked.

When she returned, her skin gray with soot, she had removed her shirt and fashioned a bag by tying the sleeves together and plugging the neck hole with a bulk can of baked beans. Though her sister’s shirt was missing, The First could not tell that her upper half was naked, for Sister Marna’s breasts were black and brown as well, the coat of grime thick as a sweater. She had filled the makeshift bag with Jello and applesauce, beans, corn, chili, a bag of fortified cereal.

They lived this way for five months. The First’s leg healed, but still Sister Marna did not let her leave the room. At the end of those five months, Sister Marna took The First by the hand. Together they waded through chunks of concrete and steel. Sister Marna led Her to a lab, which she had painstakingly cleared. The lab was large and white and filled with enough genetic replication chambers to create armies which had once been used to grow bodies from which to harvest replacement parts.

“We are the last,” said Sister Marna. “I have gone to the surface, and we are the only humans left for all the miles I could walk.”

“You went to the surface?” said The First. “But isn’t that dangerous, my sister? Are you okay?”

“I will be okay when we are no longer the last.”

Sister Marna had already readied the lab. She nicked a slice of The First’s fingers with a scalpel and, using a pair of tweezers, placed it in the solution pod connected to the machines by a network of clear tubing. The windpowered generators she had located in an empty room of the hospital contained enough power to incubate ten chambers at once. Sister Marna switched them on, and the whir echoed through the lab like a replica of its sound.

“What about you?” asked The First.

Each time they made more of us, Sister Marna said the same: “Later.” Never did her turn come; her muscles weakened, her hair fell out. Her skin reddened like a terrible burn, and our sisters were told not to touch her, for blisters covered her skin. Three years after the first of us stepped from the chamber, trembling and cold, Sister Marna’s body rotted from radiation.

The First continued the work; always She wore bandages over all ten of her fingers. We helped. We worked the machines. We recorded it all, the stories, the numbers, which is how I know this today. Upstairs in the world we cultivated new lives for ourselves, made homes of the ruins. For a while we ate prepackaged pastry cakes and dehydrated fruit, the same as our creators: beans, Jello. In ten years we were able to make green grow, and we grew our own trees, our own potatoes.

The First did not love us as Sister Marna had loved us. On Her deathbed, bitter, She refused to see us, lay all day with Her hands pressed together at her heart, speaking into the air with Her eyes closed, asking the ceiling to forgive her. The blight, we suspect, seeped into Her, corrupted Her mind. This sick had crept upon us like the daylight returned.

We must not let the blight take us, but it spreads now like fire. After all we are replicas, susceptible to Her ailments. We burn any caught speaking to the sky, to the dark of an empty room; after all, what could this be but the first sign of mental deterioration, the first sign of blight? But still we grow sicker and sicker, hack and shiver as the day we came to be. It is for this that we write our final chapter, in case.

But we are hopeful still. Using instructions left for us, we make more. The Book says it must be so. 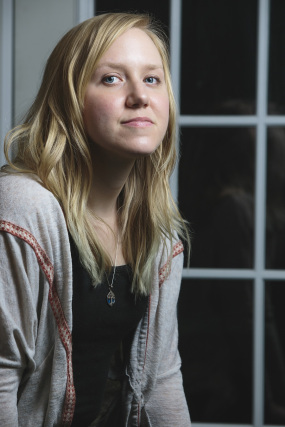 Bonnie Jo Stufflebeam’s fiction has appeared in over 50 publications such as Clarkesworld, Fantasy & Science Fiction, and Year’s Best Dark Fantasy and Horror as well as in six languages. Her work has been featured on LeVar Burton’s podcast LeVar Burton Reads. She has been a finalist for the Nebula Award and won the Grand Prize in the SyFy Channel’s Battle the Beast contest; Syfy turned her story set in the world of the Magicians into an animated short. She also curates the annual Art & Words Show in Fort Worth.

Christiana Ellis is an award-winning writer and podcaster, currently living in Cambridge, Massachusetts. Her podcast novel, Nina Kimberly the Merciless was both an inaugural nominee for the 2006 Parsec Award for Best Speculative Fiction: Long Form, as well as a finalist for a 2006 Podcast Peer Award. Nina Kimberly the Merciless is available in print from Dragon Moon Press. Christiana is also the writer, producer and star of Space Casey, a 10-part audiodrama miniseries which won the Gold Mark Time Award for Best Science Fiction Audio Production by the American Society for Science Fiction Audio and the 2008 Parsec Award for Best Science Fiction Audio Drama. In between major projects, Christiana is also the creator and talent of many other podcast productions including Talking About Survivor, Hey, Want to Watch a Movie? and Christiana’s Shallow Thoughts.