Nostalgia is a weird genre. It can be hard to hit a large audience because not everyone is nostalgic about the same things. But it’s safe to say that most people who’ve played video games are nostalgic about the games they played as kids — and that’s the sweet spot where we find Brent Black, a.k.a. brentalfloss, and his third album, Flossophy.

brentalfloss’s idea is pretty simple and I’m sure he’s not the only one who had it: take your favorite video game musical numbers and add lyrics to them. Then make YouTube videos featuring gameplay and other amusing imagery. Simple, right?

Not so much. In fact, in his Lyrics 101 series exists specifically to help aspiring songwriters learn how to write successful lyrics. I’ve written a few songs myself and most of them suck, despite the fact that I’ve had success writing fiction; brentalfloss, meanwhile, has written both parody and original music in the humor genre, as well as for the stage. And now he makes his living doing what he loves… and isn’t that what we all want, when we get right down to it? 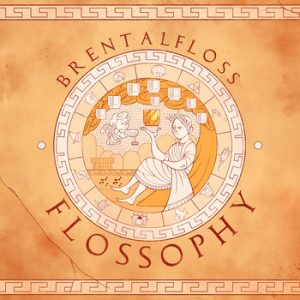 So, Flossophy. What was interesting to me when I downloaded this album was that I haven’t actually played most of the games on it. The first two albums covered a lot of my favorites — Super Mario Bros, Mega Man, Zelda, and so on — but this one features, among others, Earthbound, Mario Paint, Final Fantasy IX, and Bioshock, as well as a few original tunes.

As with Bits of Me, this album starts out with a self-referential tune introducing itself, and then jumps right into what might be the best song on the track list, “Earthbound With Lyrics”. I literally only know that the game itself is about a kid named Ness who wears a hat, but with the power of lyrics and orchestration brentalfloss told me the entire story of the game, made me laugh, and got me into a good mood despite the fact that I was sitting in traffic on the way to work. And, really, what more can one ask for?

Other favorite tracks on the album include:

Some of the songs didn’t hit for me, and I’m sure I’m not the only one — “The Team Fortress 2 Song” is short but requires listeners to understand the mechanics of the game; “Zelda: A Link To The Past With Lyrics” was funny but I’ve never played the game so I don’t get a lot of the jokes; “The Bioshock Song” is a riff on a game I never played that’s also in the style of first-half-of-the-twentieth-century music, which is two strikes against it for me personally.

I won’t lie — while I’m certainly impressed with brentalfloss’s musical and writing talent, I didn’t love his second album, Bits of Me, as much as I’d hoped to. Whatever came after that was going to impress me, but I wasn’t expecting something on the level of his first album, What If This CD… Had Lyrics?. Flossophy delivers on almost every level: musically, lyrically, and humorously. I highly recommend it to anyone who loves video games, funny music, and, yes, the occasional fart joke.

Flossophy is available on Bandcamp, but if you’re not sure you’ll like it, check some of the links in this review, because brentalfloss posts a lot of his songs as YouTube videos before releasing them on an album.

Note to Parents: This album contains adult language, as well as crude and sexual humor. It’s nothing worse than in your average PG-13 film, though I’d listen to it before letting your kids listen to it. That way, you can use your own best judgment in deciding what you expose them to. Also, if you’re interested, brentalfloss has a G-rated version of his first album as well as several kid-friendly songs on his YouTube channel, including “Little Nemo With Lyrics”, featuring his young nephew.