This review contains strong language, as well as moderate spoilers for the film.

And you thought Primer was confusing… 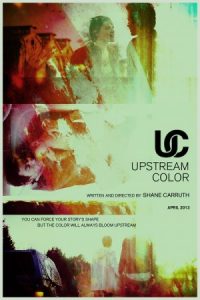 Look, I’m not going to lie to you: I had no fucking clue what was going on for most of the first half of Upstream Color, the second feature film from director Shane Carruth. But I’ll try to explain as best I can.

Kris (Amy Seimetz) is tasered and drugged at a club. The drug puts her into a hypnotic state and her attacker ruins her life. A year later, she’s just getting her shit together when she meets Jeff (Carruth), a guy who has secrets of her own. Kris and Jeff fall in love, but they then discover that they both have fallen victim to the same drug and their memories begin melding together. Interspersed in this is a weird-looking guy who keeps taking audio samples and who also helps to save Kris’s life at one point. In the end, Jeff and Kris join forces with others victimized by the drug and work to save animals that the audio sampling guy probably would’ve killed.

Yeah. I didn’t get it either.

Still, Upstream Color was highly-regarded, positively-reviewed, and multiply-awarded, so I figured it was worth a shot. And as long as you go into it not expecting to understand what’s going on, you’ll probably enjoy it. Amy Seimetz does a fabulous job with her facial expressions and body movements, and Carruth does pretty much everything else — writer, actor, director, composer, editor, and more. The chemistry between them grows with time, and they are believable as a couple, although I think a lot of that is due to the cinematic techniques Carruth uses — especially the way he cuts and edits scenes together.

As for me, I’m going to continue swimming upstream. Maybe there’ll be something more suited to me there.

Note to Parents: This film contains adult language, violence toward animals, and some truly squicky gross-out moments. I would say that younger teens shouldn’t see this one, although you should use your own best judgment when it comes to your children. And honestly this film is often so incomprehensible that I doubt your kids would be able to sit through it anyway.