In addition to Apollo 18, another recent found-footage sci-fi film has made its way to Netflix. This one had similar elements to Apollo 18, but the difference was in the nature of the monster.

This film is called Europa Report. 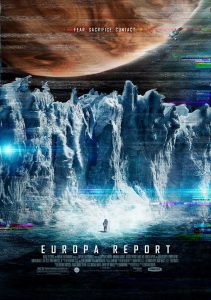 Europa Report combines reality television with space exploration similar to Virtuality (a TV pilot that didn’t get a series order). In the film, six explorers from around the world embark on the first manned mission to Europa, a moon of Jupiter. Astute viewers may recall there’s been some furor over the possibility of life on that satellite. Well, in this future, the Europa mission is intended to learn once and for all if life exists there. To help fund the mission, cameras are placed around the spacecraft and images are beamed back to Earth to be shown on television.

After an accident claims one of the crew, the remaining explorers must journey on to Europa… but another accident, and some mysterious happenings, put the entire mission in jeopardy.

Europa Report is told in a somewhat non-linear fashion, with the pilot, Rosa Dasque (Anamaria Marinca, “Asylum of the Daleks”), narrating the events of the film. Joining her are two Russians — scientist Katya Petrovna (Karolina Wydra, House’s wife on House) and engineer Andrei Blok (Michael Nyqvist, the original Dragon Tattoo trilogy), their Chinese pilot William Xu (Daniel Wu, Warcraft, coming in 2016), scientist Daniel Luxembourg (Christian Camargo, The Hurt Locker), and engineer James Corrigan (Sharlto Copley, District 9). Embeth Davidtz (Mad Men) narrates a portion of the film as well, as the CEO of Europa Ventures, who financed the entire mission. The acting was about what one would expect from a found-footage film, and director Sebastián Cordero used different camera effects and angles to make the best of things. By far the best work was turned in by Nyqvist, although I might be biased because I enjoyed his previous work so much.

The problem with found footage suspense films, as I mentioned in my piece on Apollo 18, is that there’s really only one way for the story to go: everyone is happy, someone dies, we get a “shit just got real” moment, and then people start getting picked off one by one until the remaining survivors do something ridiculously heroic and some or all of them end up dead. If you watch Europa Report, you won’t see anything new plot-wise. But what you will see is a well-designed, well-shot film with plausible, realistic science and enough suspense to keep you interested.

Because, unlike a straight-up horror film, you can actually see a version of Europa Report coming true someday, and we can only hope that the real Europa mission doesn’t end like the fictional one did.

Note to Parents: This film contains mild violence — mostly of the space adventure type — as well as adult language and some frightening moments. You will see one or more accidental death, although it will not be perpetrated by human-on-human violence. The film is probably okay for most teens, although you should use your own best judgment when it comes to your children.