The author’s story about the story: http://reasie.livejournal.com/663241.html

Crunches–one and a very near half.

Push-ups–none unless counting getting off floor

Calories–lost count, but all from alcohol, so okay

One year ago today I vowed I would not spend another year working on this stupid cruise ship.  One year ago my life was exactly as it is now, with exception of having a girlfriend.

Trying to have a good sulk about lack of gf, but general suckatude of life winning.  Have spent all adult years–five of them–treading the same tract of “unexplored” space with end trip to rings of Neptune tacked on by tourist company as apology for boringness of unexplored space.  Have also set lighting and sound cues for thousand ungrateful musicians with combined talent of medium-sized shrub.

(Is supposedly new tract of space each time, but how can anyone–especially easily-duped passengers who think cruise ship bands are good–tell the difference?)

Current misery doubled by working with now-ex gf.  Attempts to avoid said ex at New Year’s party largely consisted of going back to punch bowl repeatedly.  May have sung love ballad composed in throes of self-pity at end of night. Memory foggy.  Hope everyone else’s is, too.

Suspecting ship regulation against alcohol v. wise after all.  Hope they don’t read our logs.

Humiliation of “Love Ballad” finally wearing down due to co-workers not having infinite time to devote to re-watching video clip recorded by jerk supervisor.  Wish someone else would hurry up and do something embarrassing to capture Lido Deck attention.

Have decided to shave beard and do 400 crunches every day.

Fifty is an acceptable number of crunches to do in one day.  Anything higher uncivilized and leads to back injury which prevents both successful completion of job and ability to impress Cyndee.

Not too concerned about diet as have abs of steel–if steel is made of flabby pain.

Still no notice from Cyndee R, who has more talent than entire history of cruise ship performers and eyes that catch number five cerulean light beautifully.

Performances cancelled due to unforeseen Actual Interesting Sight in unexplored space.  (May be first ever.)  Passengers crowded into observation decks.  Staff scientists ecstatic at possibility of earning paychecks.  Lido Lounge empty.  Down side: Cyndee hanging out with passengers, where performers but not technicians are allowed. Plus side: no contact with ex who is likely just as miserable as me because serving staff also supposed to be invisible off-duty.

First contact is wonderful!  Quarantine and mysterious goings-on result in unthinkable: conversation between me and the gorgeous Cyndee.  Cyndee v. well-read in science fiction and possessed of astounding array of theories about culture and eating habits of aliens based on brief glimpses of floaty neon-colored things.

Rested my head against her arm while she talked. Can still smell her coconut shampoo.  Bliss!

Calories–a million.  Completely consumed store of Christmas candies, which had planned to last all year.

Cyndee less magical when not distracted by sultry voice under appropriate gel-tint.  She asked about origin of “DeShaun”.  Told her proud heritage, minus stupid apostrophe.  She felt ancestors couldn’t spell.  Made unfortunate remark about double-e ending of name properly spelled “Cindy” and annoyance of constant spell-checker alerts.

Apparently this is a sore spot.  Also tits are very likely fake.

Am doomed to dateless misery in sealed cruise ship without even amusement of doing stupid job.

Snooping aliens have apparently been in all personal logs to learn about humanity.  Have broadcast interesting segments, asking clarification.  Naturally chose comment about tits.  Tenuous truce with xgf / all hope with current not-gf doomed forever by over-sharing!

Would throw self overboard if had authority to open air locks.

Worst of all, having drunk stash, no booze to wallow in.

DO NOT HAVE BOOZE.  That was a joke.  No shipboard rules violated. (Snooping aliens.)

Have resolved to grow fat on leftover buffet pudding.  Butterscotch is the new whiskey.

Am reduced to writing long, self-pitying letter home to Dad, which I can’t send, anyway.

Apparently am most consistent logger on ship crew.  Co-workers lazier than ever expected.  Seems impossible.

(Tourists big loggers, but aliens uninterested in descriptions of selves, unexplored space.  Do not blame them, tourists all blend together pretty fast.)

Have special meeting with aliens to discuss “patterns of diction”.  Am trying to crawl out of puddle of self-pity to be honored, but would be better if had any say in this  Also would be better to have whisky, or delete key on life.  Neither, alas, in the immediate forecast.

Miraculously not dead from embarrassment.  Suspect that fair universe would allow death by embarrassment, so that we would not know how far down embarrassment can really go.  Universe not fair.

Aliens mostly look like clouds of talcum smoke lit by stage gels. Like staging for Cyndee’s solo, only more volumetric.  (Have ideas to replicate effect.)  Aliens speak through artificial synthesizer much like early twenty-first century pop stars, but musical.

Aliens say my minimal diction has simplified their understanding of English grammar.  Am personal author of Rosetta Stone!  Am not expecting any kind of pay bonus.  (Suspect Ptolemy V was also cheapskate.)

Good news: Aliens say Cyndee tits definitely real, and personal log mentions studly but aloof sound technician, which cannot be Tim as Tim is about as aloof as mosquito.

May have future job as alien ambassador!

Do not have job as alien ambassador.

Musicians no longer take my advice on gel colors and xgf is hooking up with unfairly muscular drummer.

Have more meetings with aliens.  Dull and yet headache-inducing. Sadly becoming highlight of day.  Am curiosity to them–everything I say is interesting.  Waiting for aliens to learn enough to know am complete incompetent and discard self for more charismatic cruise-ship employee, possibly xgf.

More teal-ish alien may have been flirting with me.  Uncertain as has all the expressive range of robot on phone-cam.  Mentioned “emotional vulnerability” and “sexy but doomed quest for self-improvement”.

(Flattered, but kissing cloud not as thrilling an idea as hot-chick-shaped aliens in movies.)

Teal alien flirting?  Gets more turbulent when I enter room.  Other aliens swoosh out to walls, may be laughing.

Resolution one: Get New Job.  Am no longer working for horrible cruise ship.  Am hired by aliens to be human ambassador!  Pay still unclear, fear may consist of interesting smells and tinkling sounds, but def. something Dad can brag about more readily than cruise ship sound engineer.

Second resolution: Teal Alien is def. not cocktail waitress.  Third resolution: possibly getting by on technicality.  Alien genderless, but open to being referred to as gf.

Will forgive self fourth resolution.  Daily logging clearly not necessary–sporadic updates have done their duty.  Also abs may not be strong, but have universal appeal, so can close this log content in job well done. 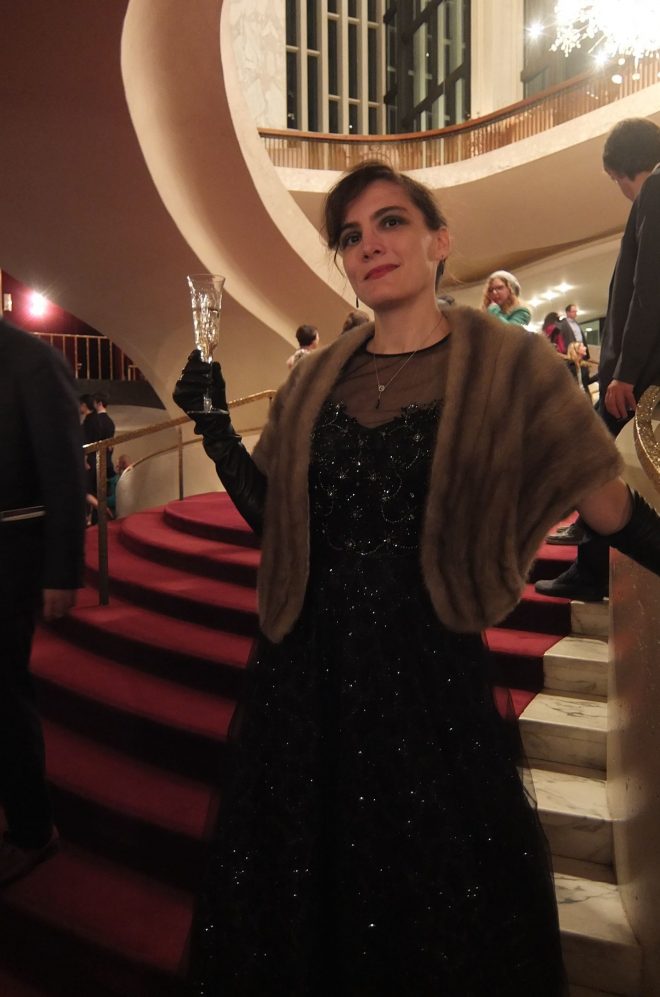 Marie Vibbert is a web developer from Cleveland, Ohio with over 15 professional short story sales. Her work has appeared in Analog, Asimov’s, Apex, Lightspeed, and many other places. She played for the Cleveland Fusion Women’s Tackle Football team and her favorite ice cream is Mitchell’s Toasted Hazelnut.

Alasdair Stuart is a professional enthusiast, pop culture analyst, writer and voice actor. He co-owns the Escape Artists podcasts and co-hosts both Escape Pod and PseudoPod.

Alasdair is an Audioverse Award winner, a multiple award finalist including the Hugo, the Ignyte, and the BFA, and has won the Karl Edward Wagner award twice. He writes the multiple-award nominated weekly pop culture newsletter THE FULL LID.

Alasdair’s latest non-fiction is Through the Valley of Shadows, a deep-dive into the origins of Star Trek’s Captain Pike from Obverse Books. His game writing includes ENie-nominated work on the Doctor Who RPG and After The War from Genesis of Legend.

A frequent podcast guest, Alasdair also co-hosts Caring Into the Void with Brock Wilbur and Jordan Shiveley. His voice acting credits include the multiple-award winning The Magnus Archives, The Secret of St. Kilda, and many more.

Visit alasdairstuart.com for all the places he blogs, writes, streams, acts, and tweets.