Despite the furor over the reboot universe and the sci-fi landscape’s love for the later iterations of Star Trek, there’s still something about The Original Series that keeps bringing people back. And one way they come back is with fan films.

One such venture is Star Trek Continues, produced by Farragut Films and DracoGen Strategic Investments. It aims to pick up, in their words, “right where the original left off” with their first episode, “Pilgrim of Eternity”. 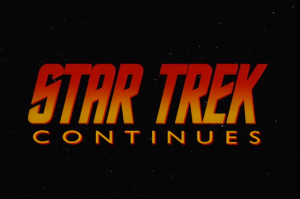 “Pilgrim of Eternity” opens on Captain Kirk and company investigating damaged power stations in a quiet region of space. They come across an anomaly that drains almost all of their power before they’re able to stop it, and when they do, they find themselves host to a rather unexpected passenger: Apollo, the Greek god they faced in the TOS episode “Who Mourns for Adonais?”. But now Apollo is an old man who just wants to die in peace.

The thing is, after what they went through last time with him, Captain Kirk and Mr. Scott are not at all sanguine about his request — and when Apollo uses his powers against the crew, their fears are borne out. At least, until Apollo himself suggests a radical way to convince the captain to trust him.

The cast of Star Trek Continues is led by Vic Mignogna, who may be best known for his voice work on shows like Fullmetal Alchemist Brotherhood, Naruto: Shippûden, and Bleach. He definitely has Kirk’s mannerisms down pat, and the look works for him, but his voice took a little getting used to and he occasionally forces the Shatnerian pauses that we so love to lampoon. He’s joined by Todd Haberkorn, a stage and voice actor, as Mr. Spock, and well-known Star Trek historian Larry Nemecek as Dr. McCoy. For Spock, Haberkorn did his best to get the look down, but he’s too slender and his voice a bit too tenor to really nail the role for me personally. Nemecek was a little better, but we’re all spoiled by Karl Urban at this point. Both actors did pull off the mannerisms and speaking patterns. And, finally, Chris Doohan (yes, James Doohan’s son) takes on the iconic role of Mr. Scott in perhaps the most accurate portrayal in the entire cast — probably because he looks a lot like TOS-era Scotty. He also looks like another actor, but I can’t place the lookalike. It’s going to drive me crazy until I do.

The original cast is rounded out by:

There are also quite a few big-name guest stars, including Jamie Bamber (Battlestar Galactica) as Mr. Simone, Marina Sirtis as the computer voice, and I could swear I saw Amanda Foreman (Crewman Hannity in the reboot universe) but she wasn’t credited so I could be wrong.

But the two main guests are Michele Specht as Dr. Elise McKennah* and Michael Forest as Apollo. Specht’s role pretty much existed to bring in the concept of the Ship’s Counselor, and to be a woman who was both empathetic and attracted to Kirk (even though he didn’t appear to act upon it in any way, which was a nice change from how he’s usually portrayed). However, the return of Forest in his original role (he played Apollo in the TOS episode) really stole the show. He’s 84 now, but still has a big voice, and he’s a really big guy — and since Mignogna, as Kirk, isn’t super-tall (just as Shatner isn’t super-tall either), that allows Apollo to tower over Kirk even though he appears to be powerless. I’m sure he got a kick out of returning to the role, and he played it perhaps better than before because the writing was more nuanced in some ways than 1960s television could be. Directed by Mignogna himself and written by Mignogna, Steve Frattarola, and Jack Treviño (Deep Space Nine), “Pilgrim of Eternity” is definitely a faithful continuation to the original series. It wasn’t too complex (as TOS wasn’t), it had science and a little action (though the action wasn’t the main plot of the story), and it focused on interpersonal interaction with the crew (as TOS often did). I will say that I don’t approve of bringing back a TOS story for the pilot episode — I’d rather see the show stand on its own feet first, before starting to pull in guest stars and sequel plots — but had TOS continued for another couple of years, I could certainly see Shatner and company in this one. I do think there was a touch of fan service with Uhura singing in the Rec Room — did she really sing that often when Nichols was playing her? — but since Apollo is the Greek god of music, I suppose I can excuse it. Also, I liked the coda, which you didn’t see a lot of in TOS, and a touch of additional makeup on Forest added an additional element that made the story better.

With the exception of the compositing of Imahara and Bamber in their spacesuits and the explosion of the anomaly, the effects (both interior and exterior) were quite good. There weren’t a ton of special-effects shots actually needed for this episode, since the sets are pretty comprehensive. I don’t know if they used the same sets as Phase 2, since that one’s shot in upstate New York and (according to IMDB) this one was shot in Kingsland, Ga., but kudos go to whoever put these sets together. Same for the costuming, which is… well, I mean, it’s not that complicated, but it’s also easy to screw up because Star Trek fans are looking for mistakes anywhere they can find them.

Overall I’d say that “Pilgrim of Eternity” is a strong entry in the continuum of fan-made continuations of TOS. Though it’ll take you some time to get used to the portrayals of Kirk, Spock, and McCoy, the rest of the show is good enough to keep you watching. I look forward to the next episode.

“Pilgrim of Eternity” can be seen on Vimeo and YouTube. I prefer the latter because it has captions.

Note to Parents: This show contains some non-sexual mature themes, but no nudity, violence, or adult language. Captain Kirk and Apollo appear shirtless once apiece in the presentation. This should be safe for any child who can watch actual TOS episodes. Of course, you should use your own best judgment when it comes to your children.

* Funny story: when I was working at the University of Central Florida, my office manager’s name was Elise McKenna. She too had red hair. Coincidence? Probably.