So, as if you didn’t know, I’m a huge Star Trek fan. It was pretty much a foregone conclusion that I was going to see Star Trek Into Darkness on opening weekend. Since my birthday was the same weekend as the opening, it was like J.J. Abrams himself gave me a present.

It’s really difficult to write a non-spoilery review of the film, but I’m going to try. There will be minor ones, but I won’t reveal any major plot points. Still, if you’re concerned about spoilers, don’t read this review until you’ve seen the film. 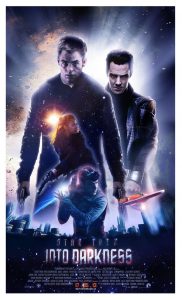 About a year after the events of Star Trek 11, Star Trek Into Darkness opens on Captain Kirk and Dr. McCoy escaping from some natives they were observing. Apparently a massive volcano was going to wipe them out, and the crew decided they should intervene (breaking the Prime Directive in the process) and stop said volcano. Kirk and Bones distracted the natives while Sulu, Spock, and Uhura worked to stop the cataclysmic event.

Since that was just the first ten minutes of the movie, you can guess whether they succeeded or not.

But the film is really about the mythical John Harrison, who people speculated about for months, and how he helps a random Starfleet officer save his daughter in exchange for committing a terrorist act against a building in London. The thing is, Harrison’s attack was just a smokescreen to get all the high-ranking officers in one place so he can take his revenge upon them for crimes yet to be explained.

The head of Starfleet, Admiral Alexander Marcus, tasks Kirk with a mission to obliterate Harrison and his hiding place. Kirk is pretty pissed off too and is on-board with this, but Spock convinces him that vengeance is not part of the Starfleet code and instead they lead a mission to capture Harrison and return him to Earth for trial.

The thing is, Harrison is hiding on the Klingon homeworld. And as Dr. McCoy will eventually say in Star Trek VI, “they don’t exactly like you.” (Kirk, at this point, does not dislike the Klingons — he doesn’t actually know any.) But when our heroes do apprehend Harrison, they learn the real reason he committed his attacks, and it’s not at all what they — or anyone else — expected.

And that’s literally all the summary I can give you right now.

The rest of the article will be littered with boshfpngrq grkg like this. When you see such nonsense, go to ROT13.com to decipher it, but only if you’ve already seen the movie. Anything obfuscated is a SPOILER.

If you don’t already know the stars of the film, you’re probably living under a rock somewhere. But, just to recap, our heroes are — in alphabetical order:

Added to this cast are the obligatory Trek guest stars. The biggest name by far is Benedict Cumberbatch (Sherlock) as John Harrison. There’s been a ton of speculation about who Cumberbatch would be playing, but I can’t tell you because it would completely spoil the film for you. Having never really seen him in an action role, I was impressed at what he was able to pull off in the combat scenes, and he brings a gravitas that is sometimes missing from Sherlock (who he plays as borderline-Asperger’s most of the time). Also in the cast is Peter Weller (Robocop), who also appeared in Star Trek: Enterprise, as Admiral Marcus, the head of Starfleet. Weller’s chief asset at this point is his voice, which works very well when he’s being all matter-of-fact as he says, essentially, “jryy, V’z tbvat gb xvyy lbh abj.” In a nice nod to his previous role, there’s a model of Archer’s Enterprise on his desk. And, finally, Alice Eve (Men in Black 3) portrays Carol Marcus, the admiral’s daughter (it’s not that much of a spoiler to tell you that). I’m pretty sure she was added as eye candy so we could see someone with a speaking role wear lingerie without it having to be Uhura again. (The lingerie scene, by the way, was pretty forced. The film didn’t need it. At all.) Oh, and, lest we forget — Aisha Hinds (Dollhouse) fills in at the navigator’s console when Chekov has to head down to help in engineering, and even Leonard Nimoy makes a brief appearance.

I do want to point out the music in the film. As a soundtrack geek (if you’ve been reading my stuff on Escape Pod, I’m sure you know that I am one), I always listen to the music of a film to see if it’s its own character, or if it’s just audio wallpaper. In this film, it was wallpaper. I didn’t catch a “Harrison’s theme” at all — just the main Trek theme and “Starfleet people doing Starfleet stuff” — until I listened to the soundtrack. Even the ending, jura Xvex naq Fcbpx fcbxr va gur ratvar ebbz, didn’t have a theme to it that I could discern. This, unfortunately, is a trend in soundtracks these days — you can hear similar problems in the Man of Steel soundtrack, although it does all come together in the end. I think it’s time for someone else to take the musical reins of Trek from Michael Giacchino — perhaps Ilan Eshkeri (Stardust) or John Ottman (X-2: X-Men United) would have a good take on it. Just, not Zimmer or Howard, please.

As for the direction, it was about what you’d expect from the Trek reboot. Fewer lens flares, especially in the beginning; lots of snap-zooms, tilted cameras, and close-ups of people’s eyes. The costuming wasn’t anything special — the crew of the enemy ship wore really weird blue-and-purple uniforms, and the Klingons looked like… well… Klingons (for the most part). Nor were there any special effects that were vastly different than the previous film — including that horrible whirling-fireflies transporter effect that looks more cartoonish than anything else.

Now, for all the snarkiness I’ve given it, I did enjoy Star Trek Into Darkness. It was a big, loud, exciting film with decent writing and direction, and if there were too many scenes shot “just because”, at least most of them worked (except the lingerie scene, which I still can’t get over the absolute uselessness of, right up there with Xvex’f guerr-jnl jvgu gur nyvra jbzra). I saw the film in 2-D, and there wasn’t anything ostentatious that I noticed being shot specifically for 3-D other than the spacewalk scene (Kirk’s heads-up display). I do think that, in many ways, the film suffers from the way the times have changed — viewers need things handed to them, and dumbed down for them, and studios are afraid to really take chances when it comes to sci-fi films. In fact, as I watched this movie, I thought “this could’ve been done as Americans vs terrorists and not been sci-fi at all” — but if you think about it that’s a plot that everyone, even non-Trek fans, can understand.

And, for us hardcore Trek fans, there was plenty of fan service, including three moments where I literally either facepalmed or sighed audibly with a combination of derision and disbelief.

If I had to rank the film in the continuum of the reboot universe, I do think it’s better than Star Trek 11 because there wasn’t so much “origin story” (always annoying) and there was enough time to develop the villains. Plus, we had more of the Kirk-Spock-McCoy dynamic (though it was mostly Kirk-Spock and Kirk-McCoy, since Spock-Uhura is now a thing). Overall I rank the films like this:

Star Trek Into Darkness is absolutely worth your time and money to see in the theater. I recommend it. Just, if you don’t want to be spoiled, don’t go on Tumblr until you do, because there’s a LOT of gifs from the movie floating around.

Note to Parents: This film contains violence (occasionally graphic, but not bloody), terrorism, premeditated murder, space battles, one adult situation, more swearing than I expected, and one scene of gratuitous near-nudity. It should be fine for anyone who is capable of handling a PG-13 film, which really says something about today’s PG-13 films, doesn’t it? Of course, you should use your own best judgment when it comes to your children.